Home Sports BYU If BYU were to build a perfect QB

If BYU were to build a perfect QB 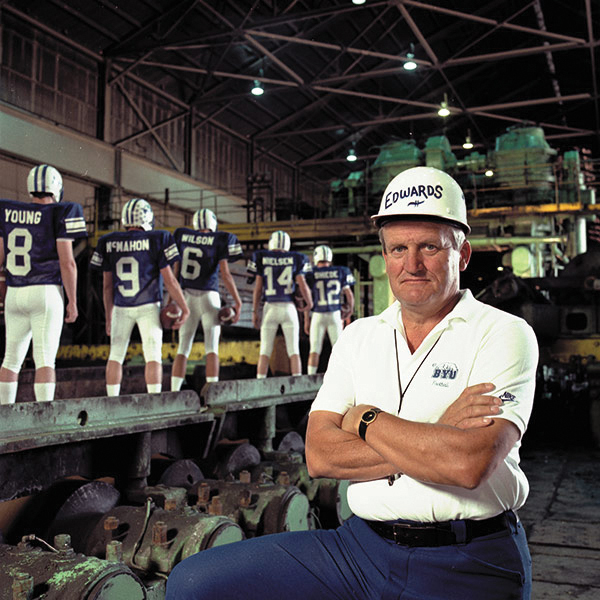 A famous BYU photo from the 1980s is titled “The Quarterback Factory.” LaVell Edwards is standing in front of an assembly line of past great Cougar signal callers from Sheide to Steve Young. What if you really could build the perfect BYU quarterback from spare parts of the all-time as they rolled by on an assembly line — in other words, Dr. Frankenstein meets Henry Ford. Here’s the ultimate Franken-QB for the Cougars.

Ty Detmer was the son of a coach and a student of the game. When he was behind center, he assumed the role of de facto coach. Detmer put all the football knowledge he accumulated over the years to good use. While at BYU he broke 59 NCAA records, won two Davey O’Brien Trophies and was named the 1990 Heisman Trophy winner.

It might seem strange for Jim McMahon to be chosen for having the best vision of any BYU quarterback, given that his left eye was extremely sensitive to light due to a childhood injury. But as a senior McMahon led the nation in completions, completion percentage, passer efficiency rating and ended his college career as the holder of 75 NCAA records. But the biggest reason McMahon is considered to have the best vision among Cougar quarterbacks is he was able to find Clay Brown in the end zone as time expired to lead the Cougars past SMU in the “Miracle Bowl.” 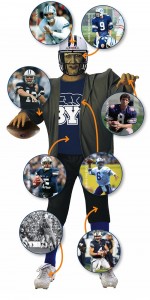 When John Beck had the ball in his hands, it was always a home run waiting to happen. Beck was blessed with two deep threats in Todd Watkins and Austin Collie during his career, and he took advantage of them. In his career he completed touchdown passes with yardage of 82, 79, 71, 70, 69, 67, 62. But the most impressive was an 11-yarder he threw across his body to Jonny Harline to beat Utah in 2006.

Steve Young’s body could have been named in any of these categories without dispute, but his hands were chosen because of a memorable play in the 1983 Holiday Bowl against Missouri. The Cougars were trailing the Tigers 17–13 with about 30 seconds left in the game when Young handed the ball off to Eddie Stinnett who passed it back to Young for the game-winning touchdown.

Max Hall wasn’t blessed with the physical tools given to players like John Beck (arm) or Taysom Hill (legs) — but what he was blessed with was guts. Guts to speak his mind and guts to win games. Number 15 finished his time in Provo as BYU’s winningest quarterback (32 wins).

Robbie Bosco had an undeniable will to win. During his two years as a starter, BYU compiled a staggering 24-3 record and won the school’s only National Championship in football. “The Rocket from Roseville” was the undisputed leader on those teams, which was also exemplified in the 1984 Holiday Bowl. Bosco engineered two fourth-quarter touchdown drives to lead the Cougars to a come-from-behind victory against Michigan.

With a nickname like “The Phantom,” we’ve found our nimblest of toes. Eldon Fortie wasn’t a traditional quarterback as the Cougars ran the single wing offense back then, but as a senior, Fortie rushed for 1,149 yards and 14 touchdowns while also passing for 814 yards and another seven scores. For his efforts, Fortie became the first Cougar to be named first team All-American.

Taysom Hill’s legend began with a 68-yard run against Hawaii as a freshman and continued to grow when he obliterated Texas’ vaunted defense the following year, running for 259 yards and 3 touchdowns. During his sophomore season, Hill showed he had both speed and power as he finished the year with 1,344 yards rushing — the third highest single season total in Cougar history.