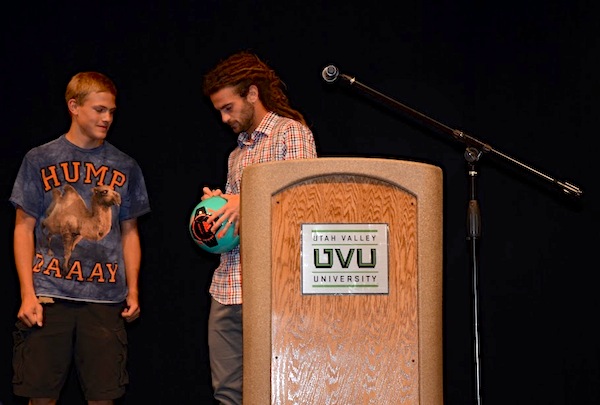 Kyle Beckerman, RSL soccer player and a member of the U.S. Men’s National Team, signs a soccer ball for a UVU student during the question and answer portion of his speech on Wednesday afternoon at UVU. (Photo by Brianna Bailey)

Kyle Beckerman, a current Real Salt Lake captain and U.S. Men’s National Team member who competed in the 2014 FIFA World Cup, shared his journey of how he became the player he is today and achieved his life-long goal of making it to the World Cup with UVU students on Wednesday.

Growing up in Maryland, Beckerman competed in several sports from a young age, including lacrosse, baseball, football, soccer and wrestling. His love and ability to compete in multiple sports came to a cross for the first time in sixth grade. He had to choose between soccer and wrestling — he chose soccer.

Beckerman withdrew from his wrestling competition and attended state soccer tryouts instead. He came into another sports crossroads a little later down the road and when pressed for a decision he again said, “No brainer, soccer.”

Beckerman then hit a point in his life where he needed to choose: go further his career in professional soccer or obtain a college education? He decided to pursue his professional career.

The Miami Fusion was the first team he was drafted on to and learned a tremendous amount from this experience.

“I had to wait my turn and tried to learn as much as possible,” Beckerman said.

After the Fusion folded in 2001, the Colorado Rapids picked him up. This is when he started to really get a taste for the game.

Following in 2007, Real Salt Lake picked him up. “Ultimately, this is the best thing that could have ever happened to me,” Beckerman said.

Coming onto the team, RSL had to change their mentality because it was a losing mentality and a contagious one amongst teammates.

RSL started having fitness for losing and rewards for winning. As their mentality and attitude began to improve and their success increased, Beckerman still had the World Cup dream.

“The ultimate dream, the World Cup is just hanging in the air over there,” Beckerman said.

He was setting little goals towards his World Cup goals. He shared that when you get to the point of being good enough to make the World Cup team, it has to do with the coach’s preference.

In 2010, he was not a preference of the coach; in 2011, that coach was fired and the new coaches preferences changed.

As the World Cup started, Beckerman shared that you don’t usually know if you’re going to be starting until game day.

“Starting in the first game against Ghana was super surreal,” Beckerman said.

After holding back tears during the national anthem and seeing friends and family right behind the flag, Beckerman said, “This reaffirmed all the feelings and beliefs I had that I could play here.”

Beckerman said that the Portugal game was the U.S.’s overall best performance in the World Cup.

Beckerman also touched on what a huge advocate he is for helping increase the development of soccer in the states.

“It’s just a matter of time. It’s coming, it’s growing. It’s a snowball coming down the hill. It’s coming and you can’t stop it.

Following his speech, Beckerman had a short amount of time to answer student’s questions.

When asked if he would ever want to play elsewhere with more ties to his roots he responded, “I’m happy here, I love Utah, I love RSL.”

No machine required: Travel back in time at the Utah Renaissance Faire Next post