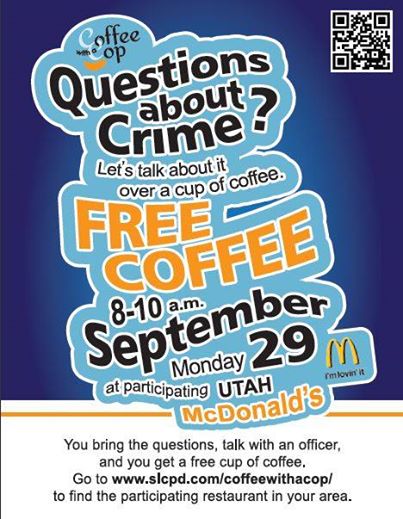 Orem and Provo residents: Ever had a question for a police officer but didn’t think it was worth a call to the police department? Well, now’s your chance to ask. On Monday morning Orem and Provo officers will sit down at a McDonald’s in their city to talk to residents.

The event is called Coffee (or cocoa) with a Cop, and similar events regularly happen in more than 175 communities across the country. According to the program’s website, the events are successful because they allow residents to interact with police officers one-on-one in a stress-free environment. Most people only encounter police in a crisis.

Orem police Lt. Craig Martinez, who will be at the Orem event on Monday, said it’s a chance for people to ask about general procedures, like what happens when a detective gets a case, or talk about problems in their neighborhoods. They’ll also get a chance to meet the city’s new police chief, Gary Giles, who started in August. In addition to Martinez and Giles, a detective, a patrol officer, a traffic officer, a neighborhood preservation officer and a school resource officer will attend.

He said there should be room for about a dozen or so people at a time. The police department plans to hold these get-togethers every couple of months.

“It’s just a way we can better communicate with the public,” Martinez added.

Orem has been getting word out about the event through Facebook and Twitter. Martinez said he’s gotten some positive feedback and the Facebook post has reached 1,200 people. Provo announced its event on social media on Thursday.

The story was updated on Friday, Sept. 26, 2014 to include information about Provo’s Coffee (and cocoa) with a Cop.

5 questions every family should ask their grandparents Previous post