Home Things To Do Events No machine required: Travel back in time at the Utah Renaissance Faire

No machine required: Travel back in time at the Utah Renaissance Faire 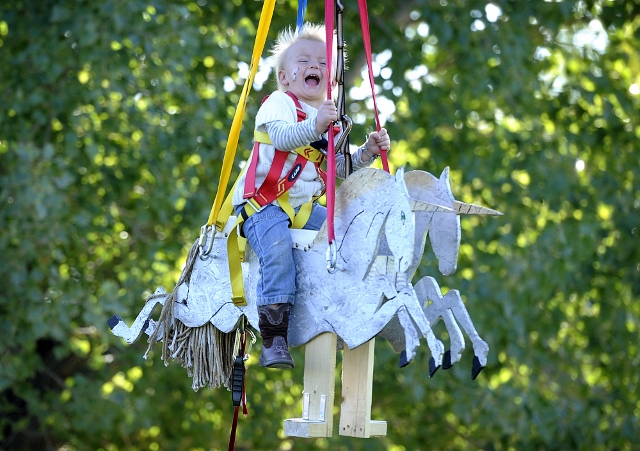 It’s not every day you can sit down with Leonardo da Vinci, Galileo, William Shakespeare and Johannes Gutenberg and ask them about their contributions to the Renaissance era.

But entertainers representing the artist, astronomer, writer and printer will all be available to bid you good morrow at the Utah Renaissance Faire Friday, Sept. 26 and Saturday, Sept. 27. Held at Thanksgiving Point’s Electric Park, the two-day event recreates the magic and spectacle of the Renaissance era with jousting, Shakespearean plays, entertainers, artisans and a nightly king’s feast.

The event began three years ago as the Utah Valley Renaissance Faire at Timpanogos Park in Provo Canyon. About 2,400 people attended. Last year, organizers moved the event to Thanksgiving Point to accommodate more guests and equestrian demonstrations. This year they’ve changed the name to the Utah Renaissance Faire to reflect growing interest statewide.

Founder and director Richard Thurman hopes that as many as 10,000 people will visit this year’s faire, which is a collaboration between the Utah Valley Fine Arts Council and the Utah Valley University School of Arts.

He said newcomers will be amazed at the amount of activities available throughout the day.

For example, the Knights of Mayhem, featured on a National Geographic TV show of the same name, will showcase full-contact jousting. The Grassroots Shakespeare Co. will be on hand giving educational workshops and presenting a fast-paced version of “Henry V” in the evenings. Other entertainers include jugglers, puppeteers, a pirate and gypsy act and a Middle Eastern dance company.

Visitors who come in Renaissance attire will receive a $2 discount on admission. And all who attend will get a glimpse of a different era, said Molina Welcker, Thanksgiving Point director of events.

“The Renaissance Faire is a unique opportunity for Utah Valley to learn what it would be like to travel back to a time of knights and castles,” she said.

5 questions every family should ask their grandparents Next post