Finding elite football talent in Utah high schools used to be a little like searching for gold from the lost Rhoades mine. Athletic treasures were out there, but only local colleges knew where to strike the right vein.

The recruiting landscape has completely changed over the past decade. Many schools outside of Utah have struck it rich with talented athletes recruited from inside the state. It has opened the door to a surge of traditional Pac-12, Big 12, Big 10 and SEC powers combing the Wasatch Front and dipping into talent pools once exclusively reserved for BYU, Utah and Utah State.

Utah County is a popular mining site for this football recruiting gold rush. Many of the 10 Utah County football players listed below are drawing both local and national attention: 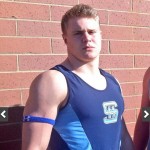 Gustin is making his mark on both sides of the ball. He has thrown for 1,383 yards and 17 touchdowns while rushing for 407 yards and three more scores through Salem Hills’ first six games. Still, defense is where the 6-foot-4, 238 lb senior really shines. Gustin has tallied 139 tackles, seven sacks and two interceptions going back to last season. He is a natural pass rusher, but equally strong against the run and can play outside linebacker or defensive end. Scout.com ranks Gustin as no. 5 defensive end nationally in the 2015 class. 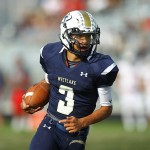 Ah You has wasted no time turning heads with his versatility. The 6-foot-1, 175 lb sophomore first emerged as a defensive star for the Thunder a year ago, recording 42 tackles and an interception. Ah You has turned over a new leaf as a starting quarterback this fall. He has passed for 616 yards and five touchdowns and added 261 yards and five more Tds on the ground. 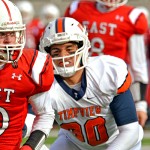 Reid is a big reason why the two-time defending state champion Thunderbirds are so imposing on defense. The 6-foot-2, 240 lb senior is averaging 6.5 tackles per game this season and has 29.5 career sacks halfway through his senior season. Currently at 187 career tackles, he is on pace to eclipse 200 before the end of the regular season. 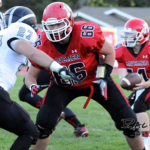 The Cavemen have fielded an explosive offense all season, averaging 36.8 points per contest during a 5-1 start. Empey has played a key role in making it happen. The 6-foot-3, 270 lb senior anchors a strong offensive line that opened plenty of holes for star running back Zach Katoa to chew up yardage. 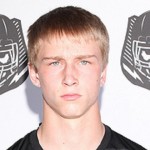 When it comes to getting the attention of college football coaches few athletic attributes turn heads like speed. And McChesney, a 5-foot-11, 168-pound running back from Lone Peak High School is the fastest recruit on this list.

McChesney recorded a 4.49 time at the Nike LA Sparq camp this past summer, which tied for the fastest time at the camp.

McChesney drew his first scholarship offer a week ago from BYU. 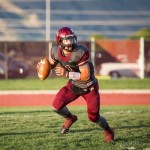 The son of former BYU RB Kalin Hall continues to emerge as a potent quarterback. Hall has thrown for 1,400 yards and 16 touchdowns through six games this season after tallying 1,398 yards and 16 touchdowns as a sophomore. The 6-foot-1, 185 lb junior has inherited his father’s shiftiness, making him a capable dual-threat under center.

Hall has drawn scholarship offers from Arkansas, BYU and Utah. 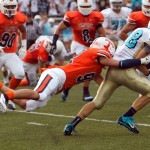 Reid isn’t the only player making the defensive highlight reel for the Thunderbirds. Kafusi, the younger brother of BYU standout Bronson Kaufusi, has shown he can also terrorize opposing offenses. He has tallied 6.5 sacks and 37 tackles in helping Timpview to a 6-0 start. Both numbers have already eclipsed his junior season totals.

Kaufusi is solidly committed to play for BYU. 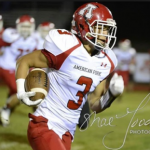 Katoa showed flashes of what he could do in the past in American Fork’s backfield. But the 6-foot-1, 190 lb senior has taken his running to a higher dimension this season. Katoa has ripped through defenses, racking up 859 yards and 11 touchdowns on 135 carries through six games – good for 6.4 yards per carry. He is also a capable receiving threat out of the backfield. 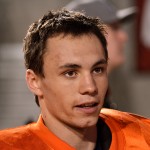 Covey is being recruited as a wide receiver, but he has made his name as a dual-threat quarterback. In six games, the 5-foot-9, 170 lb senior has passed for 1,341 yards and 13 touchdowns, while rushing for 776 yards and 15 touchdowns. Covey totaled 1,890 yards and 26 touchdowns through the air as a junior. On the ground, he had 1,264 yards and 18 touchdowns while averaging 9.3 yards per carry. 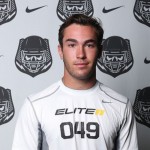 Money exploded onto the scene as a sophomore in 2012 where he threw for 2,768 yards and 26 touchdowns. Since that time, the 6-foot-2, 205 lb senior has also shown dual threat capabilities. He passed 1,819 yards and rushed 1,172 yards as a junior, while accounting for 24 total touchdowns and is well on his way to eclipsing the 1,000 yard plateau in passing and rushing again in 2014.

No schools have offered Money a scholarship yet, but he is drawing interest from Air Force, BYU, California, Colorado, Hawaii, Idaho, Missouri, Navy, and Utah State. 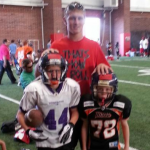 It’s been a rough season for Payson, but Baker offers a bright spot for the Lions on both sides of the ball. The 6-foot-4, 228 lb senior has been a solid receiver this year, accumulating 315 yards and a touchdown on 26 catches. Defensively, he’s chipped in 31 tackles, a pair of sacks and an interception through six games.

Baker is solidly committed to play linebacker for Utah State.