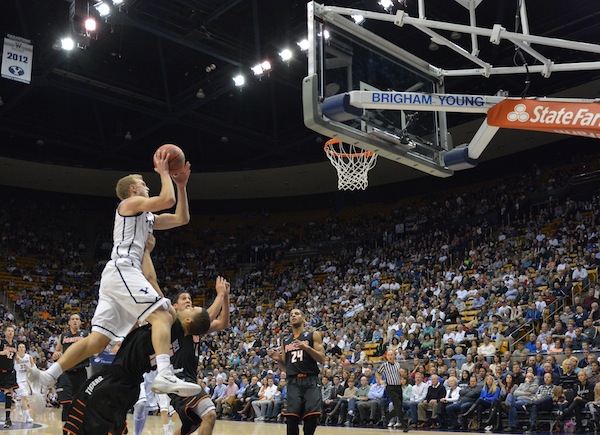 BYU senior Tyler Haws drives the ball to the basket during the 2013-14 season. Haws is one of five seniors leading the BYU men’s basketball team this season. (Photo by Rebecca Lane)

There’s something about seeing the light at the end of the tunnel that motivates a team.

Looking at the 2014-15 BYU men’s basketball team, it doesn’t seem much is different from last year.

The Cougars will still be led by senior Tyler Haws. Nate Austin will still be taking charges. Anson Winder will still be a lock-down perimeter defender. Skyler Halford will still hit timely threes, and Josh Sharp will still be cleaning the glass and exciting the crowd with monster follow-up dunks.

In fact, the only significant contributors the Cougars lost from last year are Eric Mika (LDS Church mission) and Matt Carlino (transferred to Marquette). But this year’s BYU basketball team is still somehow different.

“What really makes the team is the chemistry and the leadership, and I’m really excited for this year’s leadership,” Rose said. “These five seniors come every day with a piece of urgency to them and the finality of their career that we didn’t have in the locker room last year. (The seniors) bring great experience and leadership to us every day.”

That leadership and experience should lead to a different coaching approach from last year to this year.

[pullquote]”With seniors what you get is more of an inside-out approach, where these guys — they really coach themselves. You get a lot of direction from the coaching staff, but most all of the emotion, enthusiasm and urgency comes from within the group.”
—Dave Rose, BYU head coach[/pullquote]

“With seniors what you get is more of an inside-out approach, where these guys — they really coach themselves,” Rose said. “You get a lot of direction from the coaching staff, but most all of the emotion, enthusiasm and urgency comes from within the group. As coaches that makes you feel really comfortable because you can concentrate on strategic parts of the game, and not really worry about the feel of all the guys. Those seniors can keep your younger guys a lot more consistent. That’s what I hope is the biggest difference.”

Outside of senior leadership, junior point guard Kyle Collinsworth is a seasoned player with something to prove after spending the offseason recovering from a torn ACL he suffered in the conference tournament last season. Though not a senior, Collinsworth talked about the need, even for him, to be the floor general both on and off the court. Collinsworth led the team in assists and rebounding last season.

“I’m the point guard, a captain of the team. If guys have questions, they can come to me and I can help them,” Collinsworth said. “This is a team where we help each other out. We go to each other before we need to go to the coaches.” 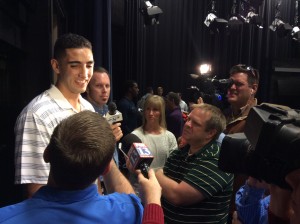 The Cougars roster also includes six freshman, including Corbin Kaufusi (younger brother to Bronson Kaufusi, who plays football for BYU). The younger Kaufusi originally planned to play football following his LDS mission, but after growing several inches, he decided that his 6-foot-10-inch frame was better suited for basketball. Rose compared his raw talent with the likes of Hall-of-Fame center Hakeem Olajuwon.

“Corbin is a guy that came back from his mission and started in the football routine and realized his body had really changed,” Rose said. “Everybody has embraced him. He reminds me a lot of Hakeem Olajuwon when I was playing in college. Just the fact that he is so young, so raw and so active, and he has not got a lot of basketball experience behind him but can really at times dominate certain parts of a pickup game, or a short scrimmage. He’s got great talent.”

Kaufusi won’t be physically looking up to any of his fearless seniors, but he expects to live up to what his coaches and teammates expect of him.

“I’m a little bit behind (Olajuwon) skill wise, but I think if I just — like everything else — put your mind to it, put in enough effort, you can get to where you want to be,” Kaufusi said on the comparison to Olajuwon. “I have to start reading up more on him. I love him, so when he (Rose) said the name I was thrilled.”

Austin is another team leader. At 6-foot-11-inches, Austin is known for being a hustle guy — diving for loose balls all the time. He shares the attitude with his other senior teammates, priding himself in being a leader.

“Now that I’m a senior there’s a little bit more urgency, a little more desperation for this team,” Austin said. “It’s more on my shoulders to lead this team, help guide the team and help the other guys learn. Last year I was still one of the older guys, but I feel like more this year, guys are depending on me to help them, guys like Corbin or Kyle Davis who don’t know the system. It’s definitely more of a responsibility on my part to help lead and teach.”

Urgency and desperation will hopefully lead to an overall improved team, and Haws’ hope is to be steady in his approach to the younger guys, and lift them up when needed.

“The urgency comes from feeling like I need to be more of a leader and play more of a vocal leadership role,” Haws said. “It feels the same (as my junior year). I’ve been through it three times and it’s just kind of routine this time of year. There are lots of guys on the team, so I have to do a good job at keeping everyone’s heads right.”

Junior guard Chase Fischer transferred from Wake Forest after the 2012-2013 season and sat out per NCAA transfer regulations, but is ready to contribute with his long-range game this year. He also values the senior leadership on the team and what that means for guys like him and Kaufusi.

“Coming in as a freshman everything’s new, everything’s fast,” Fischer said. “You have to balance your social life, your family, if you have a girlfriend, your school, your basketball. It’s good to have your seniors that have been through that. They bring a competitiveness to practice that makes you really want to play for them.”

Haws, Austin, Winder, Sharp and Halford are as ready as ever to lead their team to an undefeated season, no matter the amount of obstacles in their way.

“I guess the dream scenario is not to lose,” Austin said. “We win every game, go to the national championship and we have a big parade in Provo at the end of the year.”

Everyone wants that, of course. Hopefully, Austin’s definition of a senior will get them there.