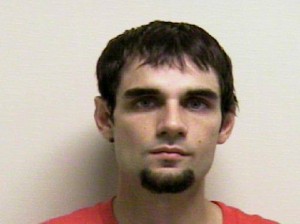 A jury trial started this week for Conrad Mark Truman, who is accused of shooting his wife Heidy on Sept. 30, 2012 at their home in Orem.

Truman, 32, is charged with murder and obstructing justice in the death of his 25-year-old wife. Prosecutors say he killed his wife to collect her life insurance benefit. The trial is expected to continue through Oct. 22.

Provo police say they’ve identified a suspect who hit a skateboarder on Tuesday night and then took off.

Tyler Bullock suffered head injuries in the accident, near 2000 North and 550 West, and was listed in critical condition on Wednesday. Police said on Thursday that they know who the driver is but haven’t yet made an arrest.

Police say they anticipate the driver will be charged with failure to remain at the scene of an accident in the coming days.

Spanish Fork police arrested Jesse Hopkins after they say he robbed the Back Alley Market Tuesday night with a BB gun.

According to police, Hopkins wore a ski mask and took cigarettes, money and an employee’s cell phone in the robbery. He was booked into the Utah County Jail on charges of aggravated robbery, retail theft and a warrant.

A federal judge this week sentenced Eagle Mountain resident Rodney Palmer to more than 17 years in prison for producing and possessing child pornography.

Palmer, 49, was arrested in October 2012 and reportedly admitted to sexually abusing a girl for several years.

Orem police arrested Josef Hardesty on Monday, after they say he robbed Hungry Howie’s Pizza on Sept. 21 and Subway on Sunday. He’s also a suspect in robberies in American Fork and Springville.

Hardesty reportedly used a small folding knife in each robbery and demanded cash. He was booked into the Utah County Jail on charges of armed robbery and burglary.

Cornbelly's maze pays tribute to 'The Wizard of Oz' Next post