5 stages of grieving the loss of Taysom Hill 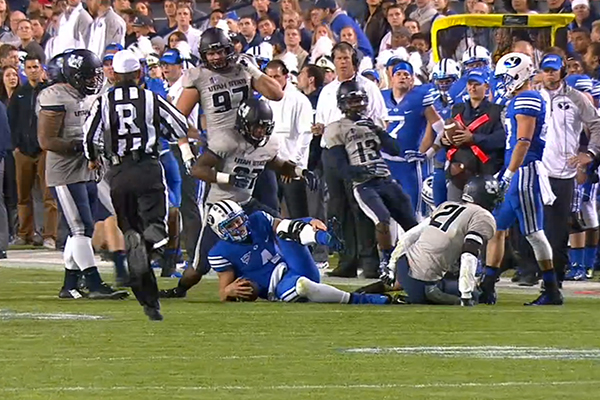 It was a bad weekend to be a BYU football fan.

In one play you lost not only your Heisman Trophy candidate, your leader, and the heart and soul of your team, but also hopes of an undefeated, playoff-crashing season. To add insult to injury, you lost to your in-state “rival” at home for the first time since Tony Danza was a taxi driver and didn’t even have the faintest idea who the boss was.

But you can’t spend the rest of the season moping and wallowing in self-pity, thinking about what might have been. That’s why I’m here to walk you through the five stages of grief and help you get on with your lives. Now I’m no licensed therapist, but I think I’ve watched enough episodes of “Dr. Phil” to get you through this.

When Taysom Hill first limped off the field, I thought to myself, “This isn’t too serious.” In the last game against Virginia, Jordan Leslie limped off the field and he was back making big plays against Utah State. Even when I saw Hill being carted out of the stadium, I was hoping that it was just a precaution. That’s when the texts started to come in from friends watching at home saying possible ankle fracture. Then about midway through what seemed to be the longest halftime ever, it was confirmed — Hill had fractured his leg.

This is about the time where it started to sink in, and I started getting angry. How could Hill get injured? This was finally our year. Thankfully, I was in a public place, or I might have thrown a tantrum more severe and intense than my daughter does when doing her nightly math homework.

In situations of loss and grief, we often think that if we could have done something differently, we could have prevented this awful situation from occurring. However, if we’ve learned something from the “Back to the Future” Trilogy or that awful Ashton Kutcher movie, “The Butterfly Effect,” trying to change the past will result in unwanted consequences in the future (or I suppose what would be our present). That knowledge didn’t help me from wondering:

But then I remembered the knowledge I gained from “Lost” that “Whatever happened, happened.” And the sooner we accept that and stop wondering what might have been, the sooner we can move on.

Now that you have realized that there’s nothing you could have done to prevent Hill’s injury, you will most likely become extremely sad at the knowledge that as an independent all BYU has to play for now is a spot in the Miami Beach Bowl against a team from the American Athletic Conference. No amount of Bishop’s Bash from the creamery or mint brownies from the Wilkinson Student Center will bring you solace for the loss of Hill and the 2014 season. But over time that sadness will transform into acceptance.

The hard part is now over. There is light at the end of the tunnel. You’ve realized that even though we don’t have Taysom, there still is plenty of football to be played. And if we’ve learned anything from this past weekend of college football, anything is possible. If BYU can string together seven wins to close out its season, who knows, maybe there is a spot for BYU in a “New Year’s Six” bowl game after all.

Who am I kidding? It’s going to take a lot more than walking through these stages of grief for me to get over the events of last weekend! Pass me that gallon of Bishop’s Bash and I’m going to try and eat my feelings away!

Hope and Healing: How a former drug addict learned to love Previous post

Carry on: Celebrating International Babywearing Week in Utah Next post