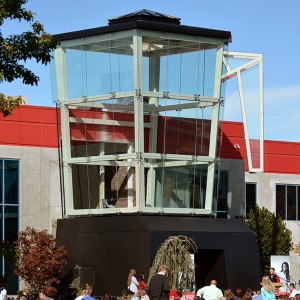 Were the new three-story entrance to the remodeled Blendtec plant an actual, working blender, it would be capable of producing 7,251,000 16-ounce smoothies in one shot.

Blendtec, a global company that manufactures blenders in Orem, unveiled a major remodel of its 270,000-square-foot headquarters today in Orem.

The focal-point of the plant is a massive three-story replica of the company’s Designer blender that serves as the main entrance to the plant. Visitors will enter the facility through the base of the blender base and beneath a steel-framed jar.

Tom Dickson, founder of Blendtec, said the top portion of the replica blender is large enough to insert a smart car.

Tim Provost, communications director at Blendtec, quizzed the capacity crowd as to how many 16-ounce smoothies the would-be functioning blender could produce in one shot. The answer was 7,251,000 smoothies.

The event began with a business-oriented pep talk from Utah Governor Gary Herbert. Herbert described Blendtec as a “disruptive company” and encouraged the Blendtec executive team and employees to continue their disruptive ways of doing business. 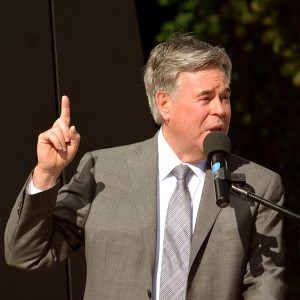 Tom Dickson, who is both chairman and chief engineer of the Blendtec, is a lifetime inventor and entrepreneur. Dickson’s passion for innovation dates back to his childhood and projects like rigging his doorbell to open the front gate.

Other upgrades to the Blendtec plant include a glass-enclosed second-story conference room housed within the jar portion of the blender sculpture, a dramatic new lobby that doubles as a demonstration center, floor-to-ceiling artwork capturing the company’s passion for quality at key points throughout the building, and additional office space as well as expansion of the customer service, marketing and engineering departmental offices.

The remodeling culminates a year of unprecedented growth for the company.

In the past 12 months, revenues have doubled with the introduction of new products, international expansion and acquisition of major new retail accounts. To meet demand, Blendtec has expanded its workforce from 280 to nearly 500, and added extra shifts as well as a new production line that doubled circuit board manufacturing capacity. The company also is reconfiguring its plant to increase manufacturing space for additional production capacity, adding new automated assembly lines for both jar assembly and motor manufacturing, and investing tens of millions of dollars in other upgrades slated for 2015.