For some, the subjects of science and religion are at odds. There is a choice: science or religion? For others, the two topics are beautifully compatible, both essential in the continual search for truth and knowledge.

In Boston, the nation’s life sciences hub, Latter-day Saint scientists often find that their religious beliefs correspond well with their research in the lab or their training in the classroom. Here are the stories of three Mormon scientists who believe you don’t need to choose between science and religion. 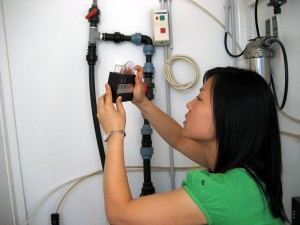 Trang Thach Hickman’s education and work as a scientist have taken her from Houston, Texas, to Washington, D.C., then to Yale University and Romania. She now works with the adult hydrocelphalus program at Brigham and Women’s Hospital in Boston.

Trang Thach Hickman first learned about the LDS Church as a five-year-old who had recently emigrated to the U.S. from Vietnam. Her mother liked the message of hope and the support they received from members of the Church. But within a few years of baptism, Hickman and one brother were the only family members who attended Sunday meetings. When her brother left to serve a mission and she moved away from home for the first time, Hickman began to better understand what, exactly, she believed.

“It was around that time that I was going through something really difficult and trying to figure out the course of my life, and it was just me and God,” Hickman says. “I didn’t have anyone to lean on. It was the first time I learned to lean on Christ and develop that relationship with him.”

It was also around this time Hickman began to see how her religion was influencing her work. She’d completed a bachelor’s degree in biology and psychology at the University of Houston then moved to Washington, D.C., to conduct biomedical research with the National Institutes of Health. Next came a master’s degree in public health from Yale University. Then she was off to Romania to study water quality, trihalomethane exposure, and bladder cancer as a Fulbright Scholar. Today, Hickman is project manager for the adult hydrocelphalus program at Boston’s Brigham & Women’s Hospital, an international leader in virtually every area of medicine.

“My religion has taught me to ask questions and to not take things at face value,” Hickman says. “I don’t think it says you don’t have faith when you ask questions. Understanding things from a religious perspective has helped me perform better professionally. When I understand who I am in a broader, more divine role, from a more divine perspective, it helps me to have more confidence.”

Hickman has seen colleagues put aside religion for the sake of science, and she acknowledges each must choose his or her own path. But for her, the two have never been at odds.

“In my classes and in my research, I’ve never felt any personal conflict,” Hickman says. “Biology is really miraculous to me, and it’s really hard to not see God’s hand behind the way we, as human beings, work. Science and religion have always gone hand in hand for me. I’ve also been pretty fortunate to have a lot of gray in my life — nothing has ever been perfectly clear one way or the other. Sometimes you really want a clear answer. But as I’ve gotten older and encountered more and more people who have a difficult time reconciling things, I’ve felt fortunate to know I don’t have to have everything figured out — it’s OK to have gray. It needn’t always be black and white.”

When Joel Mathews began studying molecular biology and microbiology at BYU, a professor explained to him that science has strengthened his testimony as a Latter-day Saint. And after completing a PhD in microbiology and immunology at Virginia Commonwealth University and becoming a postdoctoral fellow at the Harvard School of Public Health, Mathews wholeheartedly agrees.

“I’ll be working on something and think, ‘Wow, this is amazing. This didn’t happen by chance. There is a divine creator and designer who put this all into motion,’” Mathews says.

While a student in Provo, Mathews says his professors and fellow students made it clear that the world is full of scientists who pit science against religion. But he simply hasn’t found that to be true in Boston.

“I haven’t felt any conflict between religion and science,” Mathews says. “I’ve always looked at science and religion as both trying to find truth. They might go about it in different ways. Sometimes there may be slight deviants between what I learn in Church and what I learn in the lab, but to me it simply means I don’t understand everything yet.”

In his work to help improve lives for those who are suffering, Mathews has found that getting caught up in contradictions and unknowns doesn’t help his faith or his research.

“It’s not that one is right and one is wrong,” Mathews says. “In science, things change from one year to the next. I think God purposely didn’t give us A to Z. He gave us maybe a T and an X but not a lot in between. We like to say God created the world, but we don’t really know what ‘creation’ means. Could God have done it by evolution? We have no idea. I think if people can understand that neither science nor religion have complete truth, there would be a lot less conflict between the two.”

After earning a bachelor’s in molecular biology at BYU, serving a mission in Oregon, and now living in Boston while pursuing her doctorate at Harvard, Caitlin Nichols has seen plenty of opportunities for science and religion to disagree.

“Some people think science and religion cannot coexist,” Nichols says. “At the level we understand, there are things that seem to contradict each other. We could talk about the evolutionary history of homosapiens versus the creation account in the Bible. We could talk about the big bang theory versus what we believe about God as an omniscient, omnipotent creator. Scientists crave and thrive off of things that are black and white and testable and concrete. Faith, by its very nature, is sort of opposed to what science teaches — that you have to see it and touch it and measure it or it’s not real.”

But on the other hand, Nichols has seen her religion and her research marry in ways that amaze her.

“As a TA at BYU, I remember talking with students about how bacteria is used to control which genes are turned on and off to be as efficient as possible,” Nichols says. “I remember telling them, ‘Heavenly Father is so smart!’ That’s really how I feel about biology. I’m always amazed at how everything works so perfectly.”

Nichols has seen her faith enter into her work in other ways, too. Just as there are unknowns in science, there are unknowns in religion. She says she’s learned that we don’t need to know absolutely everything right now, and there are more important things to focus on than minute details. And when things go wrong — which happens a lot in science — the role of the Spirit is indispensable.

“We’re told to pray over the flocks in our fields,” Nichols says. “I don’t have flocks, but I have cells and bacteria that I grow. Sometimes I might pray to ask Heavenly Father to help me do things right at work. My faith is efficacious in those things.”