What critics are saying about ‘Meet the Mormons’ 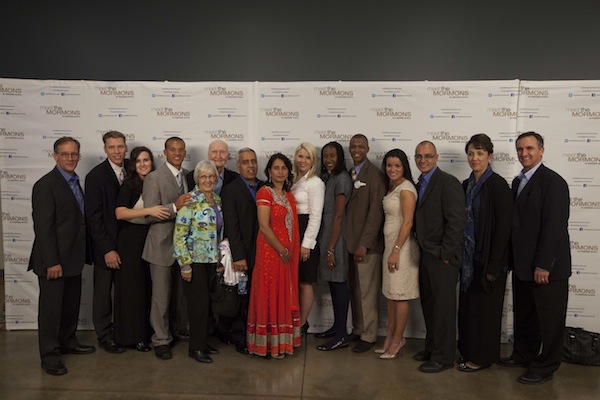 The cast of “Meet the Mormons” pose at the premiere night of the movie. (Photo courtesy LDS Church)

“Meet the Mormons,” a documentary film about six members of The Church of Jesus Christ of Latter-day Saints from around the world, premiered in 317 select theaters across U.S. last Friday. Like the people in the film, “Meet the Mormons” has seen mixed reviews, with some viewers (mostly within the Church) loving everything about it and others finding it lacking.

Here’s what people are saying about “Meet the Mormons”: the good, the bad and the middle-of-the-road.

1. The New York Times: “A Glimpse of Mormon Diversity: ‘Meet the Mormons’ explores stereotypes about a religion'”

The New York Times review sits somewhere in the middle of the love-it-or-hate-it spectrum, though it does note that the film begins in an “oddly defensive posture.” The reviewer also points out that the main objective of the film — to challenge misconceptions of what Mormons are like — may not have been needed at all.

“To support its pitch, this infomercial-like documentary takes us into six homes,” the review reads. “We meet an African-American bishop in Atlanta; a United States Navy football coach who avoids meetings on Sundays; a kickboxing husband and wife in Costa Rica; and a humanitarian in Katmandu. A once-homeless mother living in Salt Lake City offers the clearest explanation of how becoming a Mormon changed her life. But mostly the idea is just that these are diverse, interesting families — as if that should be so shocking.”

The Associated Press contributor who wrote the review gave “Meet the Mormons” two stars, reporting that the film “is a slick, upbeat Church of Jesus Christ of Latter-day Saints-backed documentary that aims to answer the image of the church and its members ‘shaped by the media and popular culture.'” As the review continues, it’s clear the reviewer felt the film felt more like propaganda and less like a hard-hitting documentary, mainly because of its lack of focus on the controversial and unpopular tenants of the Church.

“There have been Mormon-made movies that approach the religion, its history and reputation with a more open mind — Richard Dutcher’s ‘God’s Army’ is the best of those,” the review reads. “But by being, in essence, a wholesome, sugar-coated recruiting film, ‘Meet the Mormons’ — in 250 theaters this weekend — seems destined to preach only to the choir, the most famous of which is in that famous Salt Lake City Tabernacle.”

Like the New York Times, the Los Angeles Times points out that many non-LDS viewers of the film already know that Mormons aren’t terribly weird people, making the main purpose of the film a bit anticlimactic.

“The film operates under the assumption that the average Joe associates Mormonism more with ‘Sister Wives’ than Mitt Romney, so the film will be an eye-opener only for subscribers to such stereotypes,” the review notes.

It goes on to point out that the film accentuated many good things about members of the Church while avoiding controversy, particularly concerning issues like gay marriage.

AZ Central’s review of “Meet the Mormons” points out that the stories in the film are interesting and inspiring, but, according to the reviewer, lack the conflict necessary to make a story interesting. The review appropriately ends with the line “You’d learn a lot more if you went out and, well, actually met a Mormon,” which is perhaps meant to be a jab at the film but really drives home its point perfectly.

The Utah Valley newspaper Daily Herald pointed out that the film, built on the premise that the Church is widely misunderstood, would perhaps have been stronger if it had focused exclusively on the truth without attempting to generalize perceived misconceptions.

“‘Meet the Mormons’ works best when it stops making claims about how the outside world views the religion,” the review says. “It shows an interesting cross section of Latter-day Saints, from Utah to Georgia to Nepal. Most of those featured are difference-makers in their various communities, having extensive relationships with those not of their faith.”

The review goes on to state that the film tells stories well, and is able to “(strike) that balance between relatability and specialness” well.

“Does ‘Meet the Mormons’ sometimes feel like propaganda? Yes,” the review says. “Will many non-Mormons go see the film? Probably not. Will it have a sizable impact on public perception? That depends. The film’s subjects have impacted public perception, but it’s among those they interact with in their everyday lives. Continual grassroots efforts are where lasting opinions form. That’s how Mormons forge goodwill.”

6 haunted activities where ghouls rule in Utah County Next post