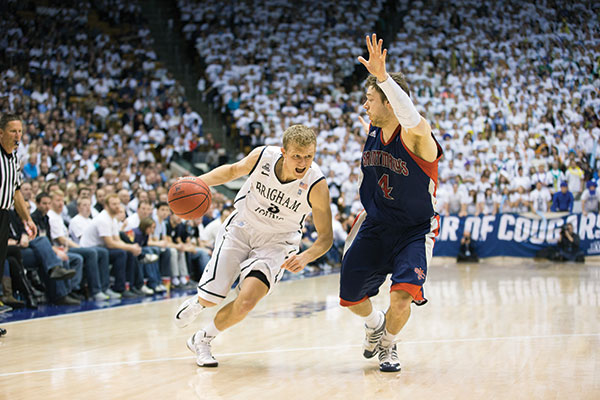 Senior Tyler Haws could break up to seven of BYU’s records in the 2014-15 season. (Photo by Jaren Wilkey/BYU Photo)

It’s still too early to determine whether Tyler Haws will be able to replicate Jimmer Fredette’s senior season that captivated the nation and spawned “Jimmermania.” But one thing is certain — barring injury — Haws will have his name all over BYU’s record book.

“Sports Illustrated” has already projected that Haws will be the top scorer in college basketball this season, but how will he match up against BYU’s best? Here are seven current BYU records that Haws could break in the upcoming 2014-15 season.

Currently Haws is fifth in points at BYU with 1,944. To catch Jimmer Fredette, he would need to score 655 points, which would amount to about 18.7 points per game[1]. Interestingly enough, that is Haws’ career average after three seasons with the Cougars.

With 659 made field goals, Haws would need to record 328 to catch Ainge who is the current record holder. This could be a stretch as Haws has never scored more than 276 baskets in a season. He should catch Michael Smith who is currently at number two with 886 made field goals.

Haws is the current record holder, making 89 percent of his free throws in his career. Barring a major slump, he should stay atop the record book.

Jimmer Fredette holds the career record for most free throws in a career with 627 made free throws. For his career, Haws has averaged 172 free throws a season. If he stays true to form, he will easily surpass Fredette.

Haws has started all but two games in his Cougar career. If he stays healthy, Haws should pass current record holder, Randy Reid, 21 games into the season.

In his three years at BYU, Tyler Haws has recorded 50 20-point games, which is currently good enough for 5th all-time at BYU. He would need to score 20 points in 17 different games this season to catch current record holder Michael Smith.

[1] All per-game estimates are based on a projected 35-game schedule.