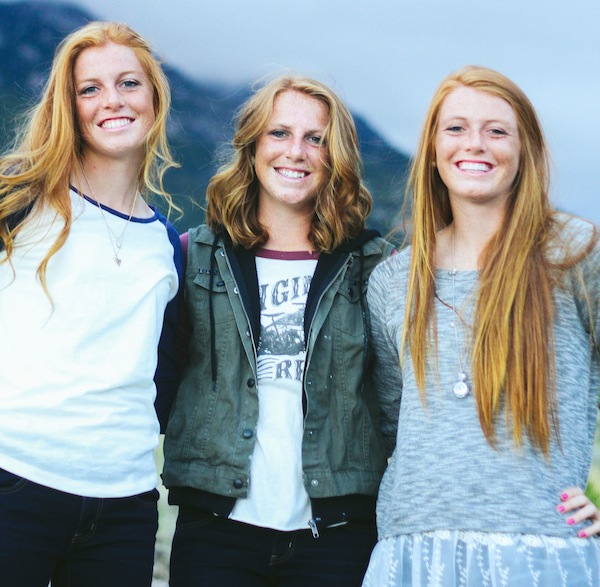 To the untrained eye, it appears the same player is pushing the ball up midfield, dropping back to challenge an attacking striker and then diving across the line to deny a would-be goal. This isn’t any Las Vegas-style illusion or magic trick. This is just the sort of thing that usually happens when three talented triplets all play on the same soccer team.

Cassidy Smith, Jessica Smith and McCall Smith are all starters for undefeated Lone Peak this season. They are not identical triplets, but it doesn’t matter. All three are skilled enough, that some coaches and players think they’re dealing with a super-powered athlete that is everywhere at one.

“It’s actually really funny when we have a coach or somebody say something,” Knights coach Heather Dahl said. “We have to tell them, ‘There’s three of them.’ Then they look out and say, ‘Oh my gosh. There really is three of them on the field!’”

Each of the Smith triplets has played a key role in helping Lone Peak finish undefeated and untied in the regular season. The Knights (18–0) are ranked No. 7 nationally by MaxPreps and have reached the semifinals of the Class 5A girls soccer tournament.

Lone Peak is doing it with a lockdown defense. The Knights have allowed just five goals all season. Cassidy Smith is the keystone in that defensive wall.

The senior goalkeeper has notched 14 of her 21 career shutouts this season.

“My biggest thing is trying to play for my team and not as an individual,” Cassidy Smith said. “When I play for myself, I start to stress myself out. When I’m playing for my team, I want to do all I can to help us achieve (success) together.” 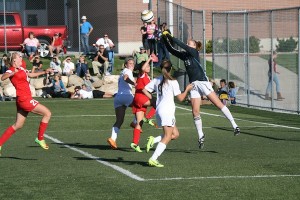 Cassidy Smith punches the ball away from the goal in one of Lone Peak’s games this season. (Photo by Kurt Johnson)

Her next stop is BYU. The Cougars originally showed lukewarm interest in Cassidy Smith and didn’t look like they would sign her at one point — a blow to a player who grew up a Cougar fan.

Cassidy Smith did not give up. She went to work improving herself and impressed the BYU coaches enough with her fearless determination and refusal to give up. It earned her a second look and a walk-on offer she had sought.

“It’s always been my dream school,” Cassidy Smith said. “It didn’t look like I was going to be able to go there, but I gave it one last shot this summer. Both of my parents have gone there. I love the coaches. I love the team. I’ve watched them since I was a little girl, so I wanted to go there.”

Jessica Smith and McCall Smith will be taking a different path. They are both heading out to play for BYU-Hawaii until it finally shuts down its athletics program in 2017.

When it happens, it will be the second time the three sisters have not played on the same soccer team. They started on a recreational team at 8 years old. Other sports like basketball, track and cross country have come and gone in the years that followed.

Soccer remained the first love, however, because that was the one sport that always made it possible for all three sisters to play together.

“We’ve all done side things, but in the end it’s always come down to soccer,” Jessica Smith said. “Soccer has always taken the first priority over any of our other extracurricular activities.”

The best part of playing together for the Smith sisters is the close bond they share. Blood really is much thicker than water when it comes to sharing frustrations and celebrating successes.

“Initially, it was a bit crazy not knowing who to play where, but in time they each settled into their preferred positions,” said Todd Smith, the Smiths’ father. “Being in different positions, they haven’t needed to compete against each other which has been nice. It hasn’t always been easy to find a team that needed players in all three positions. We have had to switch teams a couple of times in order to ensure all three the best opportunities possible.”

[pullquote]”It is really fun to see the sister-to-sister combinations that happen. We aren’t sure how many other high school soccer teams have four sisters in their starting lineups, but it can’t be too many — especially on a team that are the region champions with an undefeated schedule and hoping to become the state champions.”
—Todd Smith, Father[/pullquote]

And the family doesn’t end there. The Smith triplets also have a younger sister, Ellie Smith, who plays for Lone Peak’s soccer team.

“It is really fun to see the sister-to-sister combinations that happen,” Todd Smith said. “We aren’t sure how many other high school soccer teams have four sisters in their starting lineups, but it can’t be too many — especially on a team that are the region champions with an undefeated schedule and hoping to become the state champions.”

These days, they have plenty to celebrate with Lone Peak taking the entire state by storm the way it has done all season.

“The season has been really fun so far,” McCall Smith said. “We expected it to be. We all came in wanting to work hard. We’ve been playing together for a long time and we knew what we could do.”

The Lone Peak girls soccer team won in the second round of the state championship games against Freemont High School 1–0 on Thursday, Oct. 16. Lone Peak’s next game, the 5A semifinals, is on Tuesday, Oct. 21 at 1: 15 p.m. at Juan Diego High School.