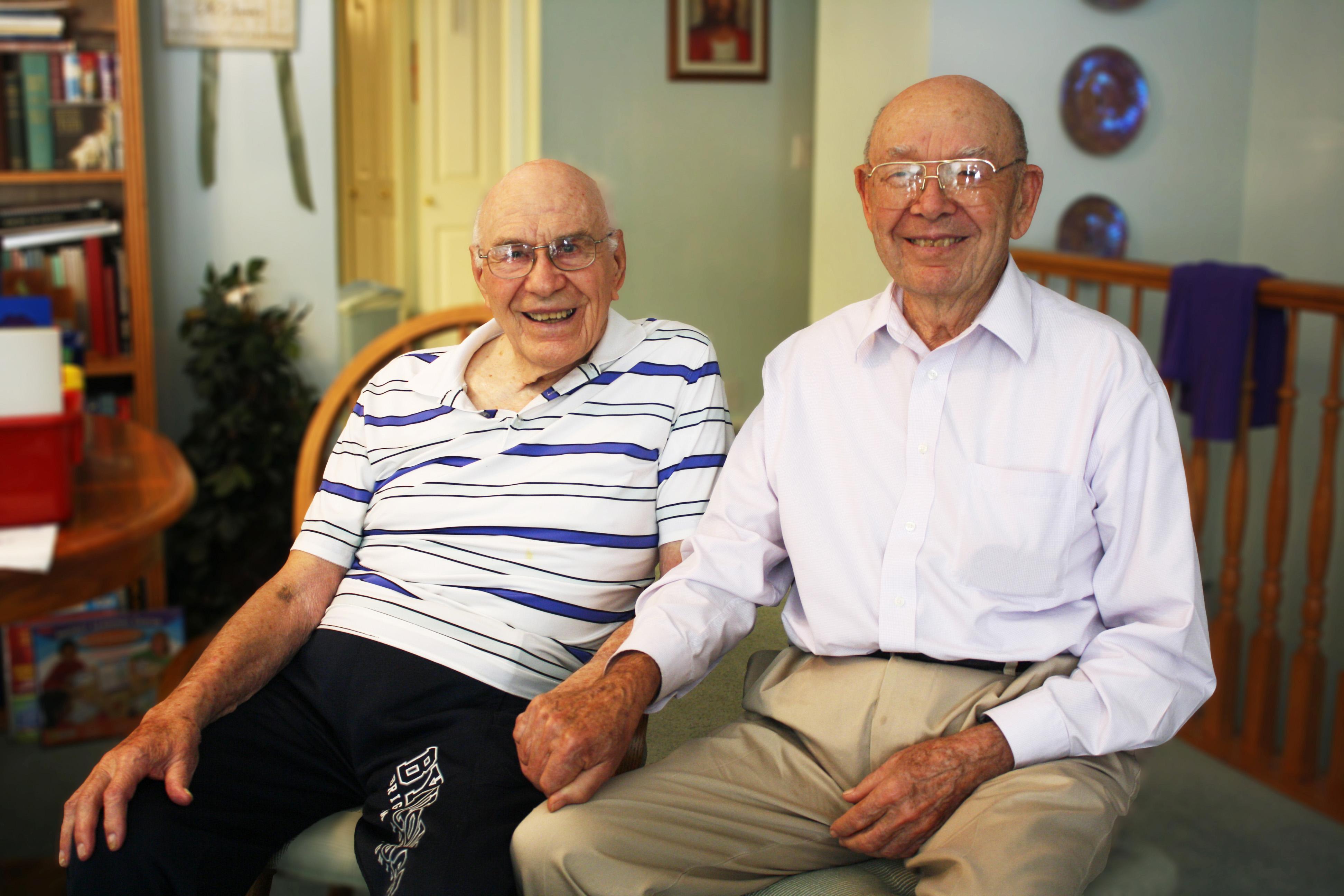 College friends Elmo Turner and Harm Steed pose for a photo after reuniting and reminiscing. (Photo by Madeleine Brown)

Back in 1950, the clever friends of a student body president candidate put a litter of pigs inside the Joseph Smith Building on the BYU campus, accompanied by a sign that read, “We’re rootin’ for Elmo.”

One of those friends was my maternal great-grandfather, Harmon Steed, of Provo. The successful candidate for Brigham Young University student body president was my paternal grandfather’s cousin, Elmo Turner, of Taylorsville.

The two college friends and roommates were reunited this summer, 63 years after graduating from BYU, and I get to take credit for it.

While interviewing my great-grandparents in the fall of 2012 for a college project, I was told the story about the pigs running free in the same building where I was taking a class at the time. My great-grandfather mentioned Elmo’s last name, and I just knew it had to be the same Elmo Turner from the other side of my family.

“When I went to BYU, I got together with some other return missionaries. There were 10 of us in this house, and we called it The House of Israel,” Steed said back in 2012.

The House of Israel was a “unique” group of returned missionaries. This group lasted for about 30 years. The actual location changed a few times, but started out near 700 E. 600 North in Provo.

“One of the fellows in The House of Israel ran for student body president,” Steed said. “His name was Elmo Turner. (My first wife) Margaret and I went on a date with him and his wife (Lois) the first time he went with her.”

Two years after making the connection, I facilitated an afternoon reunion for the two college pals. They had a grand time catching up on the past half-decade and reminiscing about their collegiate shenanigans — like the time they spiked the punch with red aniline dye at a House of Israel–thrown party. 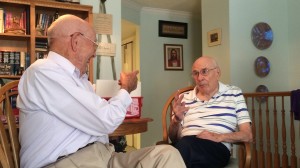 Steed and Turner tell stories about their days at BYU. (Photo by Madeleine Brown)

“And one was a return missionary, he was a good man, but not too sharp. I say that respectfully,” Turner said. “He went to the water and it was red, and said ‘Oh, I think I’m having an attack!’ Poor kid. He had to get down to the lavatory and clean his mouth out, rinse his mouth and everything, before he could feel good about being there.”

Another time they had what they called a polygamist party. Turner brought two girls to the party, but the girls didn’t know they weren’t Turner’s only date. When asked if he was in a little bit of trouble after the party, Turner responded, “A lot of trouble,” and grinned.

Steed chimed in and said the party wasn’t a big problem, though, because everybody wanted to be a part of it.

They both graduated from BYU in 1951 — Steed with a degree in accounting and Turner with a degree in elementary education. That was the same year Stan Watts coached the Cougars to the National Invitational Tournament championship.

Turner, who turned 90 in August, and Steed, who will follow suit in October, went on to have families, build successful careers and give countless hours of missionary and church service for the LDS Church. Even though they are getting up there in years, they still remember their college years with fondness.

“Well, they were fun days, because we were good in school,” Turner said. “We got our grades and they were standard up, and yet we were having a lot of fun doing it.”