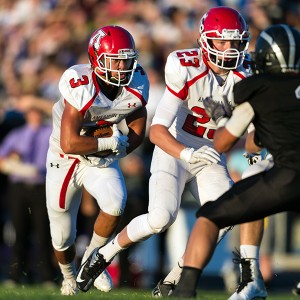 Zach Katoa (No. 3) has rushed for more than 1,000 yards this season and has scored 17 touchdowns. (Photo by Dave Argyle, dbaphotography.com)

It can sound strange to classify any champion as an underdog, but the American Fork football team is willing to embrace the label.

The Cavemen do not bear obvious telltale signs of an underdog. They went undefeated in Region 4, capturing an outright region title for the first time since 1980, and clinched a no. 1 seed going into the Class 5A tournament – which gets underway this weekend.

Check below the surface, however, and American Fork does bear some resemblance to an underdog.

The Cavemen are in the playoffs for the first time since 2011. They also face a gauntlet of tough teams who stand in the way of a potential title run – starting with nationally ranked Bingham, the defending Class 5A champions.

That’s fine with American Fork. The Cavemen prefer to work in the shadows and surprise everyone while a team like Bingham demands the spotlight.

One thing American Fork has already proved is it boasts a dangerous offense. The Cavemen rank sixth in scoring among Class 5A teams, producing 32.8 points per game. Few teams can match their one-two punch of running and passing the ball. 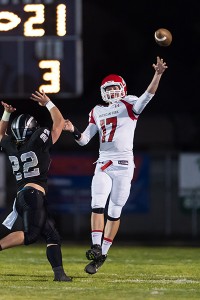 Junior Tanner Smith has been highly effective at quarterback all season. The 6-foot-3 Smith ranks fourth in the state and second in Class 5A with 2,511 passing yards and 14 touchdowns on 178-of-320 passing.

Zach Katoa is an equally potent threat at running back. Katoa ranks third in Class 5A with 1,196 rushing yards and 17 touchdowns on 226 carries.

“With the diversity of our offense and what we can do, it would be tough to prepare as a defense,” Katoa said. “It would be hard to prepare for us I feel like.”

American Fork did not draw much attention even in Region 4 before the season started. Riverton or Herriman were pegged as the region title favorites. After missing the playoffs for two straight seasons, the Cavemen were just looking to turn things around.

The talent was in place, however, to take several steps forward. American Fork featured some legitimate Division I talent on the roster like Empey and Katoa. Both players are being recruited by BYU, Utah and Utah State and several other high-profile schools.

Just missing out a year ago only made the Cavemen hungrier to get it done in 2014.

“As frustrating as last year was, it was a big step forward in that we were right there,” American Fork coach Aaron Behm said. “The next step obviously becomes getting there. Last year, yeah, we were frustrated after week 10 and being left home. This was what we were hoping to be the next step – to secure our spot. Then, we felt like we had a good shot at getting the region title and these guys put it together.”

American Fork has secured its spot. The reward is a first-round playoff game at home against Hillcrest on Saturday at 1 p.m.

And a win against Hillcrest is only the beginning of what the Cavemen want to accomplish. Success for this team means showing other teams they are as tough as their no. 1 seed indicates.

“With all of our success, we still have something to prove honestly,” Katoa said. “We still have that fight in us.”