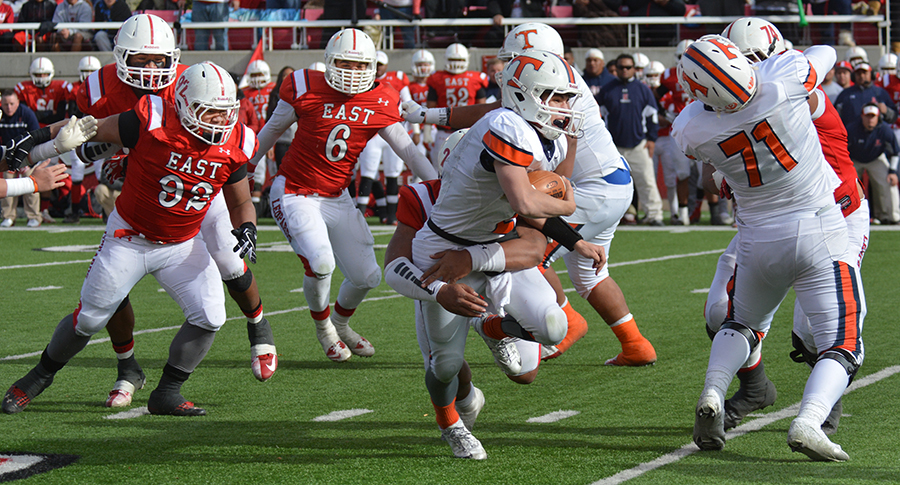 With how up and down this season has been for Cougar fans, I wouldn’t blame any of you if you want to take this bye week to get away from football, spend some time with your family, or even support the women’s volleyball team who takes on Pacific at 1 p.m. at the Smith Fieldhouse.

But for you diehard BYU fans living in Utah, this is the perfect opportunity for you to get out and scout some future Cougars. There are a number of games in the Utah State playoffs that highlight players who have either committed to play for BYU or who have a scholarship offer from the Cougars.

This game will feature American Fork three-star recruit James Empey. Empey is a 6-3, 270-pound guard with offers from BYU, Washington, Utah, Utah State and Boise State. His father, Mike Empey, played for the Cougars and later coached at the school, but that doesn’t mean Empey is a shoe in to sign with BYU. He recently took a visit to Washington and has the Huskies and Utes rated ahead of the Cougars at the moment.

Keep an eye out for 2016 recruit Simi Fehoko, a 6-4, 183-pound receiver out of Brighton High School. Fehoko has lit up the scoreboard this season for the Bengals, racking up 1,280 yards and 19 touchdowns. Fehoko has scored three touchdowns in six games this season and twice notched 200+ yards. He’s also made an impact on defense, grabbing four interceptions. Fehoko has offers from BYU, Clemson and Utah State.

Corner Canyon features Keaton Bills, a 6-5, 275-pound offensive tackle. Bills has offers from both Utah and BYU. I typically don’t go to games to watch offensive linemen play, but with the number of sacks BYU has given up this year, it might make sense to go check Bills out. He looks to have the size and build to grow into a prototypical left tackle to protect future Cougar quarterbacks’ blindside.

Cougar fans should be flocking to this game as it will include three players with offers from the Cougars and a number of players who are garnering interest. Gabe Reid, a 6-2, 240-pound outside linebacker at Timpview, is the highest rated of the bunch. Reid is a three-star recruit and the 45th ranked outside linebacker in the nation by Scout. On the season, he has notched a team-leading 81 tackles and 12 sacks. Helping Reid anchor the T-Bird defense is Cougar commit Devin Kaufusi, a 6-5, 200-pound defensive end. Kaufusi has 68 tackles and 8.5 sacks this season.

Headlining this trio of stars (for me at least) is Brittain Covey. As I’ve written previously, Covey’s highlight videos are something to behold. Because of his slight stature (Covey measures in at 5-9, 170), he looks like a pinball bouncing around the field — that is until he finds an opening and then it’s off to the races. Covey’s stats are unreal this season. He has rushed for 1,287 yards and 22 touchdowns with a mind-blowing 10.64 YPC average. Equally impressive, he has also thrown for 1,938 yards and 20 touchdowns. Covey is currently considering offers from BYU, Utah and Utah State.

This game features Cougar inside linebacker commit Jeremiah Ieremia, who recommitted to play at BYU this fall after listening to offers from Washington, Oregon State, Boise State and Utah State before ultimately deciding to become a Cougar. Ieremia has 79 tackles, one sack, and one interception on the season for Hurricane. He has also contributed on offense, rushing for 685 yards and 13 touchdowns.

Pine View’s Kody Wilstead, the top-rated, pro-style quarterback in Utah, committed to the Cougars over the summer, following a junior year where he led the Panthers to a second-place finish in the 3AA division. For his career, Wilstead has thrown for 9,308 yards and 86 touchdowns.

You might be scratching your head trying to think of someone from either of these schools entertaining an offer from BYU, and you would be right. But this is the game I will be attending this week, rooting for my Wasps to make it to their first state championship game since moving up to 3A. When Juab and Union met earlier this season, the Wasps needed a last-minute drive to edge the Cougars 18–17. The Wasps feature SUU commit Nick Robins, who has thrown for 2,078 yards and 21 touchdowns. Union is led by star running back Nic Smith who has rushed for 1,777 yards and 23 touchdowns, including 283 yards in the final game of the regular season against Grantsville. This game might not have big-name recruits like the others I’ve highlighted, but when it comes down to it, this one might be the best game of the week.

14 kinds of kids in your Primary program Next post