Turning up the heat: Peter Sproul cooks up experience at UVU 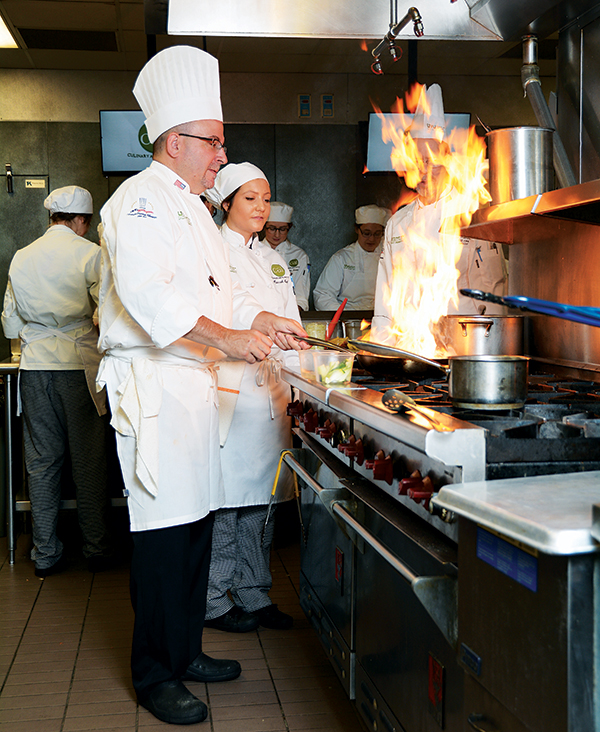 UVU Culinary Institute Director Peter Sproul works side by side aspiring chefs everyday. Because the program has grown so rapidly, the institute has expanded to a new facility in north Orem in addition to the department’s kitchen on the UVU campus. (Photo by Leah Aldous)

Want a little food for thought? Check out this Q&A with Peter Sproul.

I’m half French and half Sicilian, so I definitely grew up in a house where family time was centered around food.

A 12-course dinner at Maximus, a restaurant in the south of France.

Dish Your Family Makes You Bring to Potlucks

My family loves a dish we call “Chicken Black.” It has a sweet Asian-style marinade, and when you put it on the grill, the entire thing turns black as night!

Food trucks because they allow new chefs to get their food out into the public without the cost of a brick-and-mortar restaurant.

Utah Valley loves its dessert! Even savory foods are preferred a little sweeter.

Whatever completely satisfies my customer.

When Peter Sproul began teaching at UVU’s Culinary Arts Institute, the program was simmering. Today? It’s a full-fledged boil and has grown from dozens of graduates to hundreds, and now it employs seven full-time faculty members and six adjunct professors.

Peter brings decades of experience from his career as a chef in upscale restaurants in New York City. When his wife brought him to Utah in 2007, he was burned out on the restaurant scene and wanted to mentor young chefs.

As director of the Culinary Arts Institute, Peter oversees curriculum and faculty as well as working closely with students.

“One thing that is different about our program is that we have 30+ hours of face-to-face time with our students each week,” Peter says.

And learning how to properly dice an onion is only one ingredient in a successful culinary education.

“We teach them about workflow management,” Peter says. “To get every part of a meal on the table at the same time requires you to be thinking about one thing, looking at another and stirring something else simultaneously.”

Peter is proud of how the program teaches students real-life skills they need to succeed in a work environment.

One of the things Peter has enjoyed most in his role at UVU is seeing the huge variety of careers graduates pursue.

“Some of my students want to work in five-star restaurants and some want to sell cake lollipops out of their basement,” Peter says. “If we can help them achieve their personal goal, we’ve succeeded. You could become a research chef, a caterer, an educator or a food blogger.”

Peter also works with the school’s food competition teams and will be traveling to Luxembourg with students this year. He is an accomplished American Culinary Federation competitor and often judges cooking competitions.

While Peter misses his New York pizza, he has found plenty to love in Utah Valley. He was co-owner of the Chef’s Table for several years and has enjoyed seeing more independent restaurants popping up.

He believes UVU’s culinary program improves the local dining community as a whole.