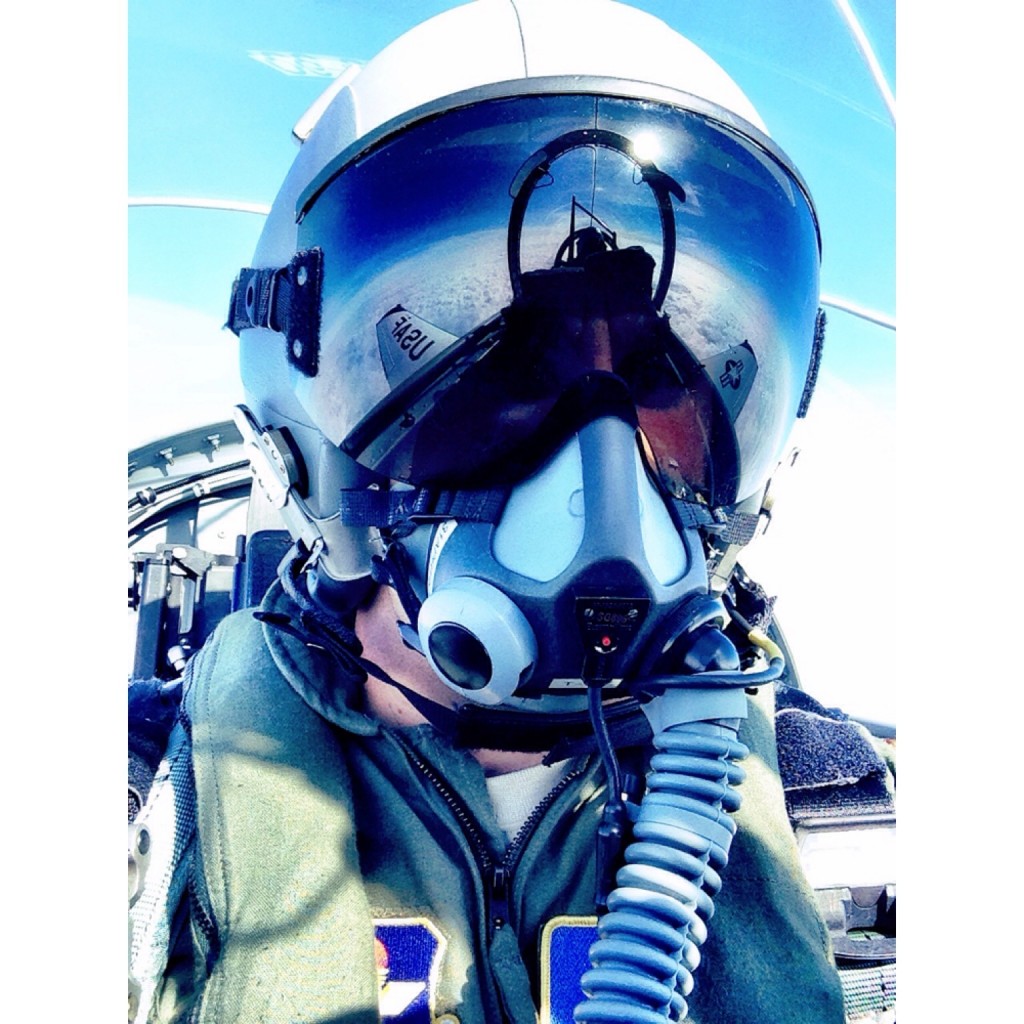 One year ago, 25-year-old Kyle Petitt was working for BYU Broadcasting and cheering on the sidelines of BYU football games as a member of BYU’s cheer squad. Now, he’s learning to fly fighter jets as an officer in the United States Air Force. Here, he (safely) snaps a selfie mid-flight, 20,000 feet in the air. (Photos courtesy of Kyle Petitt)

September 11th was a day of indescribable tragedy that affected Americans and the rest of the world. It was also the day Kyle Petitt decided he was going to join the United States Air Force.

Both of Petitt’s parents served in the Air Force, so he grew up calling several places across the globe “home,” including his most memorable home — Turkey, where he lived for three years. “We had a great life being able to move around while we grew up,” Petitt said. “Honestly, I wouldn’t have joined the Air Force if I didn’t enjoy the lifestyle.”

Petitt completed the Air Force Reserve Officer Training Corps (AFROTC) program at BYU while majoring in broadcast journalism. He also joined the BYU Cheer Squad, which he says was one of the best decisions he’s ever made.

On graduation day — Aug. 16, 2013 — Petitt walked across the stage and accepted his diploma, then went straight to his commissioning ceremony, where he was officially sworn into the Air Force.

A week later, Pettit flew to Pensacola, Fla. to start his flight training. The first time he stepped into a military aircraft, Petitt says it was “insane.” The plane, a T-6 Texan, looks like a World War II fighter with a propeller in the front and a clear bubble canopy on top.  Petitt donned 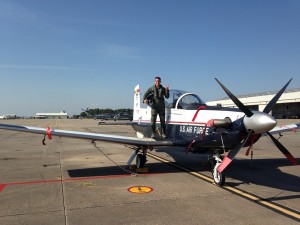 The T-6 Texan (pictured) is the first military plane Kyle Petitt flew. “When I got into this program, I knew nothing about aviation,” Petitt said. “I knew planes flew and that some magical thing called lift got them off the ground. When I came out here I gained so much respect for pilots because it’s a constant puzzle in the sky.”

his helmet and oxygen mask and stepped into the small plane with his flight instructor thinking, “I hope I can get this thing off the ground.”

“You do all this studying — about four months of academics and flight simulations — before you get in the plane, so you think you’re ready,” Petitt said. “Then you go up into this T-6 plane and your brain is just overloaded. There’s so much going on, and now all these buttons do real stuff. You’re trying to talk on the radios and get your clearance to take off, and you’re like, ‘I don’t know what I’m doing.’”

During Petitt’s first flight, he dropped his pencil. That’s no big deal on say, a classroom floor, but in a military plane, it can be deadly. It can get stuck in the controls and cause the pilot to lose control of the aircraft. Sadly, this seemingly small error has caused fatalities before. Petitt’s instructor flipped the plane upside down and shook it in order to dislodge the stray pencil, but Petitt couldn’t reach it. They tried a second time, but with no luck, the flight was aborted as a safety precaution and they headed back.

“It was the most visually stimulating thing I have ever seen in my life,” Petitt said. “We were flying at the bottom of the cloud deck out over the coast. You’re in the clouds and you can see the ocean, then it’s all white, then all of a sudden there’s the ocean again. It’s like flying through a hyperspace cloud aquarium. You’re flying at 250 miles an hour and you don’t realize how fast that is until you’re blasting in and out of clouds. So naturally, I took off my oxygen mask and threw up.” 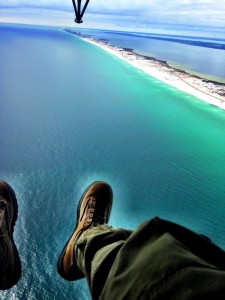 Petitt says flying over the Gulf Coast for the first time was the most visually stimulating experience he’s ever had.

Despite the dropped pencil and the full barf bag, the flight solidified Petitt’s decision that he knew he had found what he wanted to do for the rest of his life.

Now, Petitt is training to be a Combat Systems Officer (think Maverick’s Goose — “Top Gun” style).  His day-to-day alternates between classroom time, flight simulations, planning missions and flying.  On Dec. 11, Petitt and his 17 peers in Undergraduate Combat Systems Officer Training (UCT) will be ranked and assigned to a plane according to those rankings, their preferences and  ultimately, the needs of the Air Force.

Petitt is hoping to fly an F-15 Strike Eagle, a low-flying plane that flies 1650 miles an hour and has never been shot down since it was first used in the military in the 80’s. Once he officially graduates and is assigned a plane, Petitt will go wherever the Air Force sends him. Being at the mercy of the Air Force has made things like dating a little tricky, he says, but he feels surrounded by friends and family who support and are proud of his decision to join the Air Force. Still, every now and then, he’ll come across a negative comment on Facebook about how the military is doing things.

“You definitely encounter people like that, but it really doesn’t matter if they support it or not or have negative feelings about the military or not because we are what we are and I know the good that comes from it,” Petitt said. “I am an active person, so for me, talk is cheap. What I mean by that is, with all due respect to those who have so much to say, most people are not doing anything. Do we always execute perfectly ? No. Is that always blasted by the media? I think so. We are America, so people can disagree, but everybody wants some kind of change to happen, and we are doing our best. We are doing what we think is right. And we are making a difference in people’s lives all over the place — especially in foreign countries. They can criticize, but I know people who have sacrificed huge amounts — everything from friends, brothers, limbs, even time at home and comfort and security. They sacrifice so much to go, and honestly our goal is to make the world a better place. We are out there doing something and it’s a little bit more than posting a status on Facebook.” 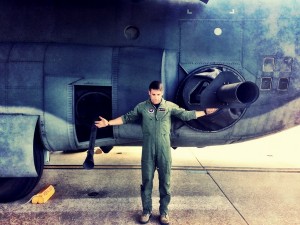 On all of those big days that get the wheels turning again,” Petitt said, “September 11th, Veterans Day, Memorial Day, D-day — it always reminds me why I’m doing this. Because there are people who really do need help and I could not handle not actually doing something about that.”

The cadre at the BYU AFROTC where Petitt earned his commission offer their suggestions for honoring veterans and current service members in conversation and on social media:

“Teach the young to be respectful and realize that what they inherit is due to what others have paid for in blood, sweat, tears, and anguish and that military personnel are not blood thirsty or scary.  They are our brothers, sisters, fathers, mothers, etc. that simply desire to serve the greater body politic in our great experiment of democracy and for causes greater than themselves.  And while some come home bruised, broken and torn, they do it mostly for the love of their fellow man.”

“Treat my family with dignity and respect. They have suffered through four deployments, multiple separations and each and every time they have stepped up to the challenge. They are veterans as much as I am.”

“Take advantage of the rights guaranteed by the Constitution and protected by members of the military (vote, practice freedom of speech, assembly, etc). Thank a service member/veteran for their service, but, just as important, thank their families. Fly the flag at home, work or school. Pay respect to the flag (stand and place your hand over your heart in parades, stop when the National Anthem is being played and place your hand over your heart, etc.)

In honor of US veterans, BYU will hold Patriot Week, with opening ceremonies Nov. 11 at 7:30 a.m. and daily commemorative activities at 11 a.m. for the remainder of the week.