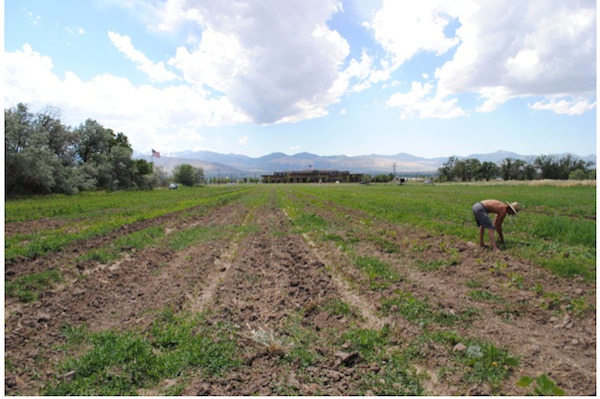 This shows the Gene and Deane Wheadon Farmland Preserve in Salt Lake County. The county bought the property in 2008 and preserved it as a community garden, orchard and trail. (Photo coutesy Wheadon | Utah Open Lands)

Local food movement, food security, sustainability — however you look at it, the farmland in Provo and Orem has been disappearing for decades and what little is left is in danger of being lost to subdivisions.

Richard Wilkerson and LaDonn Christianson on Tuesday asked the Provo Municipal Council to start thinking of ways to prioritize agriculture over development. Wilkerson works with his son on a vegetable-growing farm in Lakeview area in south Orem; Christianson’s family owns agricultural land in west Provo.

Both say farmers and ranchers are feeling pressure to sell and develop their land but that the city could develop and encourage policies to keep farmland open and productive, help farmers and still allow some development.

“We propose an agriculture reserve be established to provide a food growing area for ourselves and future generations,” Wilkerson wrote in a letter to the city. “I believe that developing this area for any other use would be a great loss to our community as we have no alternative lands to serve that purpose. Is it wise to put ourselves in a position where we rely solely on imported foods? As history has taught us, one way to lose our freedom is to lose control of our food supply.”

Wilkerson, who grew up in the area, said there were vegetable and dairy farms, orchards and even farms known for producing celery.

“This choice is important because whatever we do with what’s left can’t be undone once it’s done,” Wilkerson said. “You can change farmland into houses a lot easier than the other way around.”

Christianson said there are policies the city can adopt to help farmers and still allow some development — it could encourage developers to preserve open space in developments in exchange for higher density allowances. It could allow for agricultural protection for farms of 5 acres or more. It could make tax policies to favor farmers. It could create conservation easements.

Wilkerson said there are several organizations working to preserve agricultural land already. Provo City could work with the USDA conservation easement program, Utah Open Lands or The Trust for Public Land to create easements and keep the farmland free of development.

“The west side is prime vegetable ground. Some of the best in the state,” he said. “Let’s look at changing the direction” of the city and not subdivide and develop farmland.

“I think a first step would be a farmers coalition to see what the interest of those farmers are,” Christianson said.