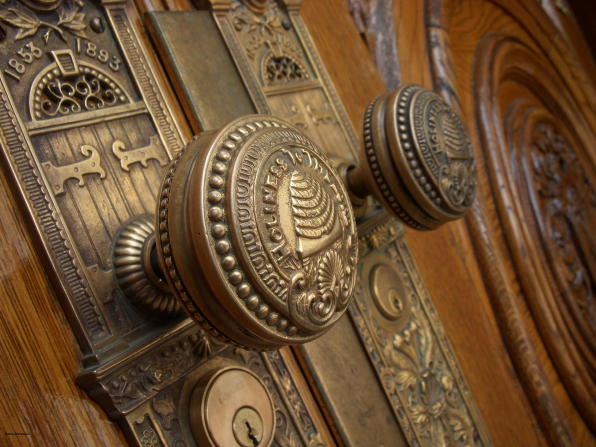 Young women ages 12 and 13 in the Church are known as Beehives. Read below to find out why. (Photo courtesy LDS.org Media Library)

Unlike other Christians, members of The Church of Jesus Christ of Latter-day Saints call the ordinance of eating bread and water in remembrance of Christ the “sacrament,” not “communion.” We also call our local congregations “wards,” our young men “priests” and even sometimes call ourselves “Mormons.”

When converts join the Church, the new vocabulary takes some time to master. But where did all these unusual terms come from? Here’s the origin of 13 commonly used terms unique to the LDS Church.

The word “stake” refers to an administrative unit in the Church comprised of several wards located near each other geographically. The term “stake” is a reference to the imagery in Isaiah 54:2 of a stake holding a tent (the Church) in place. The verse reads, “Enlarge the place of thy tent, and let them stretch forth the curtains of thine habitations: spare not, lengthen thy cords, and strengthen thy stakes.”

Branches, which are the smallest organized Church congregations, were known initially as “churches” (as referenced in D&C 24:3, for example). However, they became known as “branches” over time (see D&C 72:23). This is in reference to the way these small congregations were formed: as Church members shared the gospel with their neighbors, new “branches” formed off the main body of the Church.

Larger organized congregations are known as wards, several of which make up a stake. Joseph Smith borrowed the term “ward” from the term used for political districts of frontier municipalities when he created the first “wards” in Nauvoo. (The city was divided by 1844 into 10 wards with three more in the surrounding area.)

Brigham Young loved the symbol of the beehive, which represented harmony, cooperation and work to the early pioneers. Because of this association, “Beehive” was the first name by which young women were known and is now the name for 12- and 13-year-old girls in the Church. According to the Church’s Young Women website, “Beehives today learn to work together in cooperation and harmony as they strengthen their faith in Jesus Christ and prepare to stand for truth and righteousness.”

The term “Mia Maid” — the Church’s name for girls 14 and 15 years old — is a historical reference to the Mutual Improvement Association, a forerunner to today’s Young Men and Young Women organizations. The MIA emblem was a rose, which symbolized love, faith and purity. The Church’s Young Women website states that “Mia Maids today learn about love, faith, and purity as they strengthen their testimony and accept and act upon the Young Women values.”

Laurels — the oldest girls in the young women program at 16 and 17 years of age — are so named in reference to the laurel wreath. The wreath is traditionally given as a symbol of significant achievement, honor and accomplishment. As Laurels grow to adulthood, they work toward finishing their preparation to make sacred covenants and receive temple ordinances.

When the Mutual Improvement Association was discontinued to make way for the Young Men and Young Women organizations, the term “Mutual” remained as a name for the organizations’ regularly scheduled activity night. The term “Mutual” suggests shared experiences, mutual respect and mutual support for class members.

Members of The Church of Jesus Christ of Latter-day Saints are commonly known as “Mormons,” which is a nickname given to Church members because of our belief in the Book of Mormon. The book was named for Mormon, the prophet-historian in ancient America who compiled and abridged the book.

The smallest book of canonized scripture in the Church is entitled the “Pearl of Great Price,” which is a reference to a short parable found in Matthew 13:45-46: “Again, the kingdom of heaven is like unto a merchant man, seeking goodly pearls: Who, when he had found one pearl of great price, went and sold all that he had, and bought it.” The name suggests that the teachings found in the book are of great worth.

The Church’s organization for women is known as the “Relief Society,” a name that refers to the organization’s purpose of administering relief to those in need. John Widtsoe, a member of the Quorum of the Twelve Apostles, summarized the Relief Society’s purpose as pursuing the “relief of poverty, relief of illness; relief of doubt, relief of ignorance — relief of all that hinders the joy and progress of woman.”

The term “tithing” is not a term distinct to the Church but is a word that means to give one-tenth of one’s income annually to the Lord through His Church. The word is used in the Old Testament, where it is recorded that Saints as early as Abraham paid tithes.

The phrase “Word of Wisdom” is, to the the untrained ear, unhelpfully nonspecific. The phrase, which has become the term for the Lord’s law of health outlined in Doctrine and Covenants 89, comes from the actual text of the revelation. There the Lord describes the health code as “A Word of Wisdom, for the benefit of the council of high priests, assembled in Kirtland, and the church, and also the saints in Zion — To be sent greeting; not by commandment or constraint, but by revelation and the word of wisdom, showing forth the order and will of God in the temporal salvation of all saints in the last days” (emphasis added).