Home LDS Being LDS In the writing room with ‘Studio C’

In the writing room with ‘Studio C’ 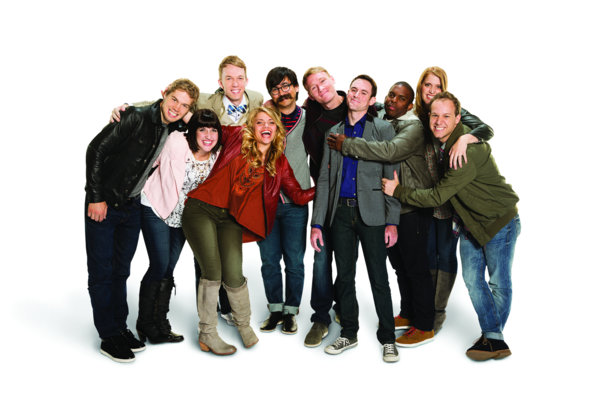 When a “Studio C” episode airs, we just get to sit back and laugh. But long before a “Studio C” sketch goes on the screen, the actors spend hours in the writing studio. Here, we take an inside look at the “Studio C” writing process. (Photo courtesy “Studio C”)

BYUtv’s hit sketch comedy show “Studio C” is making millions of people laugh. But we wanted to get a behind-the-scenes look at what it takes to bring an episode to the screen.

Is it all fun and games?

“That’s actually pretty accurate, though sometimes it can be difficult too,” said Matt Meese, the starring actor on “Studio C” who approached BYUtv producer Jared Shores with the idea for the show. “There are plenty of long nights, tight deadlines and edit meetings with scripts we just can’t get quite right, but through all of it, I’m working with some of the most wonderful people I know. We have a lot of fun together so I often don’t notice the amount of time it takes.”

Meese and the rest of the production crew, which involves many of the actors who double as writers for the show, started writing for Studio C’s 6th season just a week after wrapping Season 5, which started airing in October.

“We don’t take super long breaks because of everything we need to do,” said producer Jared Shores. “Needless to say, we’re all looking forward to Christmas.”

The “Studio C” crew is now meeting four days a week to read through scripts for Season 6. I got to sit in on a writer’s meeting. While Shores warned me it was much more anticlimactic than the show on TV, I felt a little like I got a private showing of a Studio C performance. Matt Meese was cracking jokes and doing voices like he does on the show. I was impressed with how instantly and unreservedly all of the actors got into character as they read each others’ scripts. My favorite script was one where two actors portray professional chocolate tasting connoisseurs and are so good that they can detect the history of the cocoa bean the chocolate came from.

After reading through a script, the group discusses its potential as a sketch for the show and gives the writer suggested edits. When it came to critiquing each other’s work, I’d skip the stereotype of theater people as “dramatic” and say they were very diplomatic, supportive and professional. That became most evident when they busted out in laughter mid-read.

It’s not always easy to come up with a script that will translate to the screen. Whitney Call, another writer and performer on the show, says it can take anywhere from 10 minutes to three weeks to write a script. Only half of those scripts actually make it on screen. 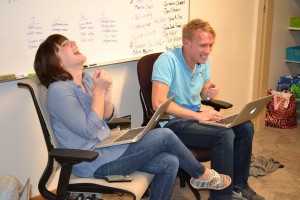 “Acting is so much fun,” writer/performer Whitney Call said. “You get to transform into anything! I’d say writing is often more fulfilling, though, because you’ve created a world, and you get to see tons of talented people bring it to life. Getting to do both, though, it’s unfair how awesome it is and that I get to do it all the time. I get to play in the worlds I create.” (Photo by Kim Christenson)

“One of the biggest challenges is to keep up personal morale,” Call said. “Nobody is going to babysit you and your sketches, so when you’re having an off week (or two or seven), you have to pull yourself out. You might have sketches that you thought would go well totally tank in the writers’ room. But then you have to come back the next week with the confidence to present something new. You have to believe in yourself. It’s a skill I’m still trying to acquire, but I’m already feeling the benefits of honing it.”

Once a sketch does make it to the filming stage, I asked if much improv is added into it.

“We don’t do a ton of improv, but stick to scripts the majority of the time. Our improv happens in rehearsal and then we’ll write it in,” Shores said. “The thing you have to remember is that by the time we do a sketch for a live audience we’ve read it about five times, edited it about three times and rehearsed it about 25 times.”

All of that rehearsal makes for pretty smooth sailing during live tapings — which are filmed in BYU Broadcasting’s “Studio C” (yep, that’s where the show got its name), usually in front of an audience of 200.

“We’ve never really had anything go horribly wrong, thankfully,” Shores said. “During one live taping Jeremy’s wife went into labor, which threw things off a little, but the team was able to pull through and still have a great night.”

But even after writing, reading and performing a sketch for weeks, Shores and the actors still watch the show and find it funny. 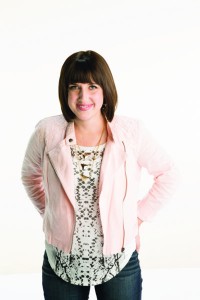 Call is married to Stephen Meek, another actor and writer on “Studio C.” “Stephen is my best friend, and he’s talented and an expert in my field,” Call said. “I show him all of my sketches before anyone else and he’s supportive while also giving me great feedback. Stephen is also a treat to act with. We get to do so many fun things together. I can’t count the number of times we’ve looked at each other and said incredulously, ‘This is our life!'” (Photo courtesy of “Studio C”)

“James’s funny walk gets me every time in ‘Michael Bay’s Epic Slow-Mo Fail.’ And I think I know every frame in ‘Peeta’s Song,’” Call said. “The time when a sketch feels least funny is probably the dress rehearsal before our live tapings, because by then, we’ve rehearsed the sketch at least 20 times and there’s no audience yet to make us feel like it’s funny again.”

But the show goes on until the sketches are ironed out, edited and ready for broadcasting.

“By the time a sketch actually airs, I’ve probably seen and edited a sketch about 35 times,” Shores said. “It’s kind of funny that I still watch the show live on-air, but I do.”

When he’s watching his production come to life on screen, Shores is watching with about 50 million other households, not to mention the online viewers — their YouTube channel alone has broken 70 million views. Studio C’s Hunger Games parodies are its fastest growing sketches on YouTube.

“Studio C” starts rehearsing and filming Season 6 this spring. They’ve aired almost 50 episodes to date. How many more they’ll air depends on how long they can keep us laughing.

“We’re continually surprised and grateful for how much love we receive from our fans,” Shores said. “We really have a dedicated audience who we love.”