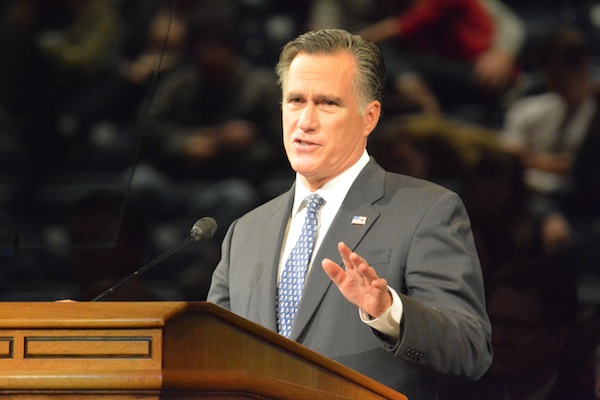 Former Republican Presidential Candidate Mitt Romney returned to his alma mater Tuesday morning to share lessons he learned while campaigning for the U.S. presidency in his speech titled, “Life Lessons at the Front.”

“Despite my loss, the experience was extraordinary and revealing,” Romney said. “I come away more optimistic about the future of the country. … While it is fashionable to deny it, I firmly believe that America is the greatest nation on earth.”

In between cracking jokes and reminiscing about the road to failed candidacy, Romney was relaxed as he shared experiences with BYU students on positive lessons from his campaign.

“Our anonymous (Internet) surfing may not be recorded on earth, but it leaves an imprint in the book of life. Remember, every day, you are writing your autobiography,” Romney said.

Here are seven lessons Romney remembered and advised BYU students to follow during his hour-long speech.

1. Reach out our hands

As Romney recollected friendships gained and people met along the campaign trail, he reminded attendees to remember the other LDS members around them and to be the good stereotype — service-oriented and thoughtful — for which Mormons are known.

“I can affirm this: your fellow members of the Church will be a blessing to you that far more than compensates,” Romney said. “They will bless you when you are sick, lift you up when you fall, help you raise a teenager, counsel you about a job, and yes, even move your unpacked junk. We are not perfect. As a matter of fact, in many things we are probably no better than anyone else. But we are remarkably good at reaching out our hands to one another in need. Decide to be one of those who does just that.”

2. Save yourself from your consequences

Romney encouraged students to take responsibility for their lives, including whether they will have success.

“More often than not, our secular affairs are up to us,” Romney said. “Don’t count on God to save you from the consequences of your decisions or to arrange earthly affairs to work in your favor.”

Explaining how political debates can be a “sweaty business,” Romney shared how he kept perspective when he went up against more experienced debaters than himself.

“At the top of the sheet of paper that was placed on my podium for me to make notes, just before the debate kicked off, I wrote at the top one word: ‘Dad,'” Romney said. “I also drew a small image of the sun. Throughout the debate, when I’d glance down at that paper, I was reminded of my father’s fearlessness in fighting for what he believed was right. And the sun? That reminded me of the familiar scripture, ‘Let your light so shine…’ Win or lose a debate, I hoped I would never do anything that would dishonor or discredit the things I hold most dear.

Taking advice from different religious leaders he’s met, Romney told students to be cautious of how they act because they never know the difference one person can make.

“Consider with care how you act, what you say and to what you will devote your life, for I assure you, your choices shape the lives of others,” Romney said.

Counting his family as his biggest heroes, Romney also recognized faithful supporters — one man showing up to 150 of Romney’s events while campaigning to be president — who became his hero by their examples.

“America needs heroes,” Romney said. “You don’t have to be larger than life to be a hero, just larger than yourself.”

While Romney had experience speaking and serving in leadership positions in the LDS Church, he acknowledged how beneficial it was for him to have a speech coach and recommended that everyone have some sort of coach in their lives.

“Just like I did during the campaign, you need to have a life coach,” Romney suggested, “you need someone who will tell you the truth, tell you that the perfect mate you have been looking for is no more perfect than you are, tell you when you are wrong, and tell you what will make things right.

“I can assure you, finding someone who cares enough about you to tell you the truth and then taking time to gain their counsel and their coaching is invaluable.”

7. Remember to be a disciple

Sharing an experience where they stayed in a hotel in Jerusalem, Romney  pointed out an analogy he realized after looking through the King David Hotel guest book that was full of celebrity guests.

“The next day, Ann and Josh went to see the garden tomb believed to be Jesus’ final earthly resting place. Of course, His signature is not in the King David Hotel guest book. Unlike its famous guests, He was not only a visitor to Jerusalem; He was its very foundation.

“We can never forget that we are His disciples. We may not hob nob with the famous, but in prayer, we can speak with God every day.”

5 reasons why you should attend the BYU vs. Savannah State game Previous post