Provo parking plan in the works 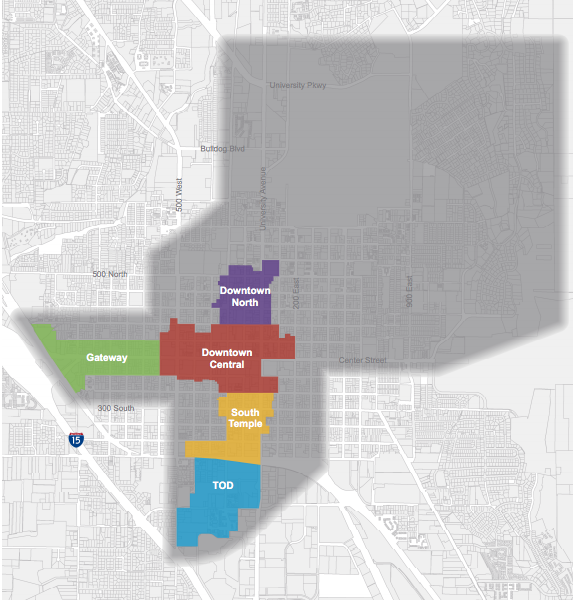 The Provo Parking Management Plan shows a map of the areas of concern in downtown Provo. (Courtesy Vision Provo)

People going to BYU take up all the on-street parking. If you’ve lived in Provo, or tried to park somewhere in the city, then you probably know parts of Provo have a parking problem.

The city has hired an outside consultant group that over the next year will be looking at parking problems and solutions, said Provo Mayor John Curtis. The end result could be adding more permit parking programs, eliminating the existing one in the Seven Peaks area or even adding meters to the downtown area.

“Many things are going to happen,” he said. “I don’t think it will come out with one thing; it’s more of a citywide strategy.”

Though parking has been a topic of controversy for many years in Provo, and has been debated on a neighborhood basis, this study will finally “bring it to a head,” Curtis said. Everything is on the table.

The Strategic Parking Management Plan study, which kicked off this month with a public meeting, will look at the entire city — “it’s one of the reasons we’re excited about it,” Curtis said. “We’ve never done it in a holistic, entire-city approach.”

It’s important to look at the whole city because parking decisions in one area will impact another area, he said. The coming Bus Rapid Transit will affect parking all over Provo, so that has to be taken into account too, Curtis said.

Parking issues also are tied to another big issue in the city — towing and booting. Last year the city made changes to how towing companies can operate and how much they can charge.

Provo has set up a new Vision Provo website tied to the study. So far, the topics on the site are downtown parking (with a survey) and parking around BYU. Registered users can add their own ideas to the topics.

In the meantime, the city is doing something else to help people find parking downtown. It’s going to be putting up wayfinding signs, so people can find all the available parking. “We have parking downtown, people just can’t find it,” Curtis said.

More than winter blues: When to seek help for depression Next post