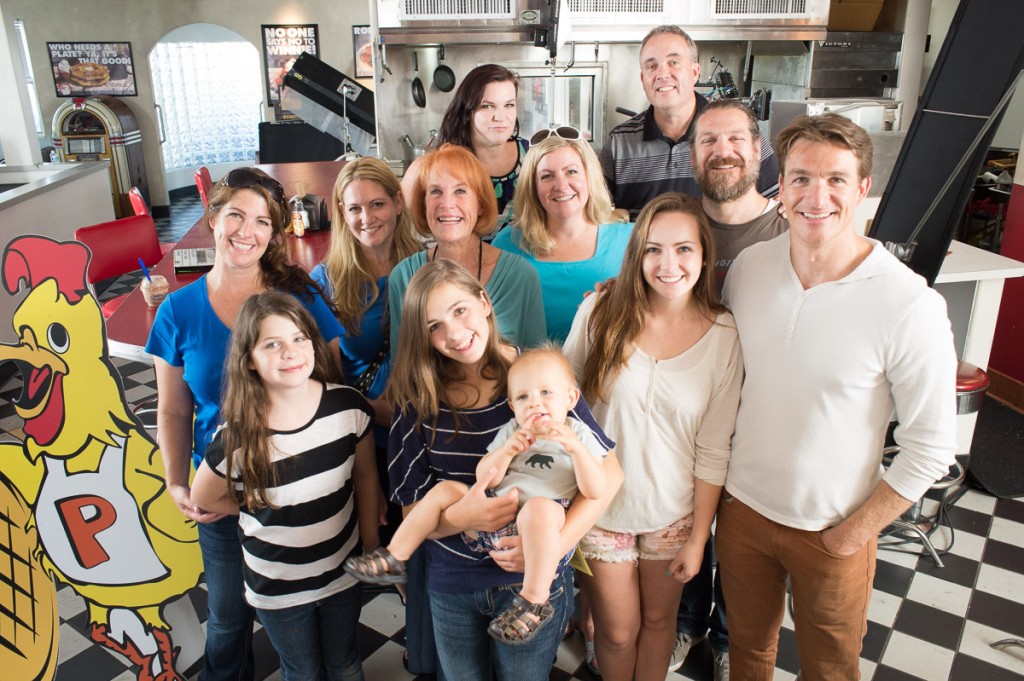 But despite her illustrious resume, Charlene said her favorite roles are those of wife and mother. Balancing career and family required deliberate choices and sacrifice, but for Johnson, family always came first.

“My kids … bring me more joy and happiness than anything else I’ve ever done or any memory I’ve ever had,” she said. “My kids now can’t believe some of the films I turned down, but they’re the reason, and I don’t regret it. It would have been fun, but the price was too high. You have to be constantly aware of when that price becomes too high.”

Charlene’s big break into the film industry is the stuff from which ingénue stories are made. Visits to the set of television series “The Virginian” with actress Roberta Shore, a friend from Johnson’s Pasadena, Calif. ward of The Church of Jesus Christ of Latter-day Saints, led to Charlene applying to the make-up artists and hairstylists union when she was fresh out of high school. Before the ink had dried on her union membership, she was handpicked to replace the departing hairstylist on “The Adventures of Ozzie and Harriet” in 1965. 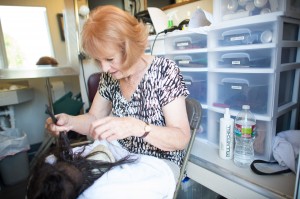 Charlene Johnson works on a wig in her trailer for the film “Waffle Street.” Johnson said her favorite part of hairstyling for Hollywood is the creative, problem-solving process like creating a mullet from several wigs. (Photo by Jay Drowns)

“Here I was, the youngest person in the industry at that time, probably … and they offered me the job,” she said. “I had my own parking place marked on the lot, I was making department head money, I had my own room with my name on it, and most of all, I got screen credit — it was just a dream come true!”

As Charlene’s reputation grew in the film industry, so did her family. She met Bob Johnson on a blind date in 1965, and they were engaged by dawn. Throughout her career, Charlene has focused on projects that allow her to put family first — even if that meant moving five children under the age of 10 to New Orleans for a few months with the help of the family’s babysitter, Dixie, while working on “Pretty Baby” with Susan Sarandon and Brooke Shields.

As the kids got older, Johnson deliberately chose television work near the family home in suburban Los Angeles, including “Mork and Mindy,” “The Odd Couple,” and “The Brady Bunch.” Her children were no strangers to the set, accompanying their mom on prep days or, later, working as extras on films like “Newsies,” “Maverick,” and “Free Willy 2.”

Familiarity with film sets rubbed off on the Johnson sons, who all have legitimate film careers of their own. Bart Johnson is best known as Coach Bolton, Zac Efron’s character’s father, in the “High School Musical” franchise. Adam Johnson is an actor with a number of upcoming film projects, including “Mythica” and “The Last Straw.” Brad Johnson acts, directs and produces, most recently filming “Waffle Street” in Utah Valley this summer. 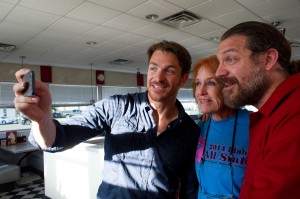 Brad Johnson, left, captures a moment on the set of “Waffle Street” with his mother Charlene, center, and brother Adam, right. All three Johnsons worked on the film, which shot in The One Man Band Diner in Lehi in August 2014. (Photo by Jay Drowns)

“It’s so fun that so many of us ended up doing the same thing,” she said. “We’re all really creative people in my family, and (my children) just wanted something where they could express themselves.”

Despite the entertainment industry’s reputation for damaging families, Charlene and her late husband, Bob, raised a grounded, tight-knit family within the reach of Hollywood’s limelight. She attributes this success to both the example she and Bob set for their children by living true to their Latter-day Saint beliefs and help from outstanding church leaders who filled in the gaps while Charlene was away on location.

“I realized that a lot of people in the industry are absolutely faithless, they don’t believe in God, but their hearts can be touched by someone who’s just kind and good, which I tried to be,” she said. “I think my kids could look at me and see that I was greatly respected in my business, and they could be that way too and still maintain their standards and their beliefs and be decent kids… They never learned to be jealous or vindictive or mean. They’ve always been good, kindhearted people. I think that’s reflected in the way they treat people and the way they’re treated back.”

Charlene advised working mothers to be careful and recognize when their work starts shortchanging their family.

“It would have been very easy not to turn jobs down and to keep working because you can get caught up in the trap of ego and can almost ignore your kids,” she said. “That almost happened to me, but I … was able to quit the job I was on and stay home with my kids and reconnect. You have to be really careful in this business because it can be consuming, and you can forget what’s really important in life. When it’s all over, the only thing that counts is your family.”

5 things every teenager should understand about fasting Next post