Home LDS Being LDS 1984 to 2014: Evolution of the Christmas Devotional 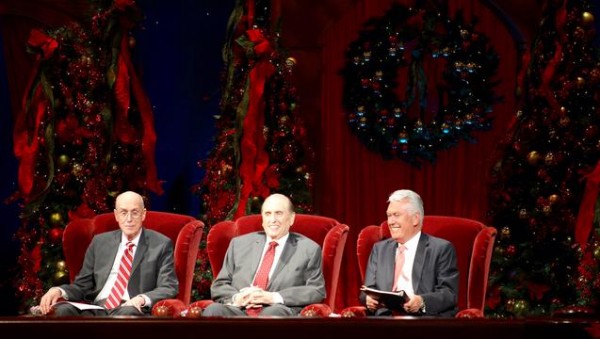 The First Presidency’s Christmas Devotional, held last Sunday, is the most recent installment in a decades-long tradition in The Church of Jesus Christ of Latter-day Saints. The devotional began as a way for Church leadership to celebrate the season with Church employees and has evolved into the worldwide broadcast. This year’s event drew thousands of viewers from around the world.

Though the devotional has been held for decades, it has grown and changed notably in just the last 30 years. Here’s a side-by-side comparison of Sunday’s devotional and the one in 1984.

From 1994 until 2013, all three members of the First Presidency spoke at the annual First Presidency Christmas Devotional. Beginning last year, Church leaders from other quorums and general auxiliary presidencies have again been invited to speak.

Names and leadership positions of speakers

1984: Via satellite to chapels in the United States, Canada and Puerto Rico
2014: Via radio, television and the Internet; also to local Church meetinghouses.

1984: None mentioned in report
2014: Video and audio translated into 58 languages

1984: “He, the Son of God, condescended to take upon himself a mortal body. His mother … gave him mortality. His father, the Eternal God, vested him with power over death. No other man, or woman, ever was born into the world so endowed. He came in the humblest of circumstances. He died the most painful and ignominious of deaths to rise again the third day as ‘the first fruits of them that slept.’” —President Hinckley

“The Restoration of The Church of Jesus Christ of Latter-day Saints, the restitution of the priesthood, the universal proclamation of the gospel to the living, and the redemptive work for our kindred dead in temples throughout the world—all are part of the preparation for the Second Coming of the Anointed One.” —Elder Nelson

2014: “I felt joy in that way just days ago. Our first great-grandchild was born. I looked down on her and thought, ‘She seems to glow with a beauty I didn’t think was possible in a newborn.’ In an instant I realized that the beauty I saw and the glow I felt when I looked at her face came from her purity and, to me, by the Light of Christ.” —President Eyring

“This is a magical time of the year when miracles happen, hearts are softened, and the pure love of Christ is felt and experienced like no other time of the year. As we celebrate the birth of Jesus Christ this season, let us also celebrate all that His birth symbolizes, especially the love.” —Sister Oscarson

Fueling the fire: Four and a half reasons Utah should be afraid Previous post