Home Sports BYU Fueling the fire: Four and a half reasons Utah should be afraid

Fueling the fire: Four and a half reasons Utah should be afraid

Thanks for fanning the fire, Coach Krystkowiak.

With the football rivalry on hiatus for another season, it’s only fitting that fans pulling for the red, or the blue, will get their fix soon.

Good news — a little bit of smack talk should be all the team needs … and Tyler Haws, Kyle Collinsworth, Anson Winder ….

The list goes on. The talent is abundant. The hate … boiling.

So for the sake of BYU fans after the lighthearted comments  about BYU only being half a team, said last week by Utah head coach Larry Krystowiak, it seems fitting we give you four and a half reasons why BYU edges out what should be a nail biter in the Deseret Duel at the Marriott Center on Wednesday, Dec. 10.

No, you’re not still stuck in the post College Football Playoff selection haze, thinking Tyler Haws should be in this spot. Kyle Collinsworth is the reason Utah fans should be afraid, and why BYU makes up a whole team.

Seventeen games passed before Collinsworth collected 20 points in a game last season. Number of games with 20-or-more points so far this year? Two. While BYU’s junior point guard is not necessarily relied upon to get to the hole, it’s a significant bonus that he is — and he’s making the most of it.

Over his past two games Collinsworth has averaged 19.5 points, 11 rebounds and 7 assists — not bad off an ACL tear last March. If that isn’t scary, consider his stat line against Hawaii, in which he posted 19 points, 12 rebounds and 10 assists — the first triple-double posted by a Cougar since Michael Smith posted 20, 12 and 10 in 1988.

And it might not be the last for KC.

“It’s a great honor,” Collinsworth said on being one of five players in BYU history to record a triple-double. “I look forward to get more and continue to get better as a team and as an individual.”

2. Tyler Haws playing like the top scorer in the land

The production of Collinsworth isn’t slowing down the “Great and Powerful.” In fact, Haws is flourishing. The senior guard averaged 19.4 points per game through the first five games, and has since been on a tare, averaging 30.7 in the last four. The number one scoring team in the country is looking as dangerous as ever with the nation’s third ranked scorer.

He’s also contributing more on the boards as of late, posting 5.5 over the last four games. With Collinsworth drawing more and more attention, Haws should be able to create space and post solid numbers in his final regular season game against Utah.

3. All the small things 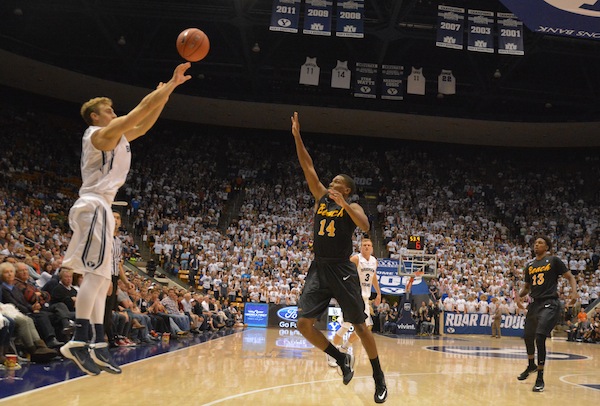 Chase Fischer shoots a three during a home game. (Photo by Rebecca Lane)

Truth hurts. BYU’s abysmal shooting percentage from three and the free throw line last season killed the Cougars down the stretch against Gonzaga and Oregon. It’s not quite the same this year. The Cougars are shooting .401 percent from beyond the arc and place third in the nation with 89 threes made, a plus-margin of .063 percent through nine games last season, and 44 more made threes. Same goes for free throws where the Cougars have improved total free throw percentage from .69.

The biggest reason for this: the increased shooting percentage and amount of takes from Tyler Haws, Anson Winder and Chase Fischer. The three guards are a combined 67 for 153 from three-point land, a combined .437 percent, .036 better than the team as a whole.

They’re making it rain, and it shouldn’t stop with Utah. 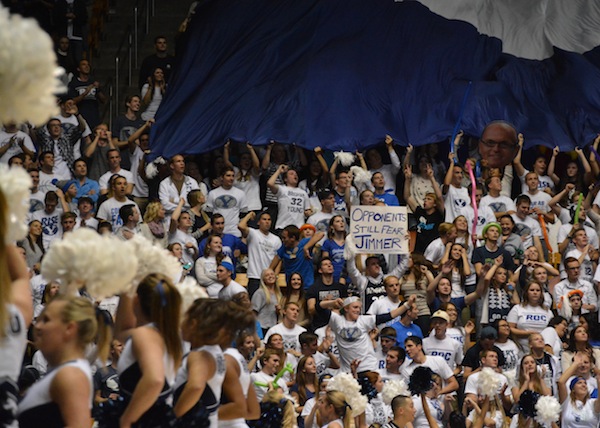 Opponents who come to the Marriott Center have called the atmosphere intimidating. (Photo by Rebecca Lane)

BYU has a 4–0 home record, with a plus-margin of victory of just over 25 points in those contests. The contrast between the offense and defense is glaring, as the Cougars rank 1st and 332nd, respectively. Utah is sure to expose the defense and score, as they are a more balanced team, ranking in the top 30 in both offense and defense, but I give BYU the edge in the Marriott Center.

That’s it. I arbitrarily choose BYU over Utah because of these four and one half reasons. Be afraid, Utah. Be very afraid.

Catch the game live at 7 p.m. MST at the Marriott Center or live on ESPNU.