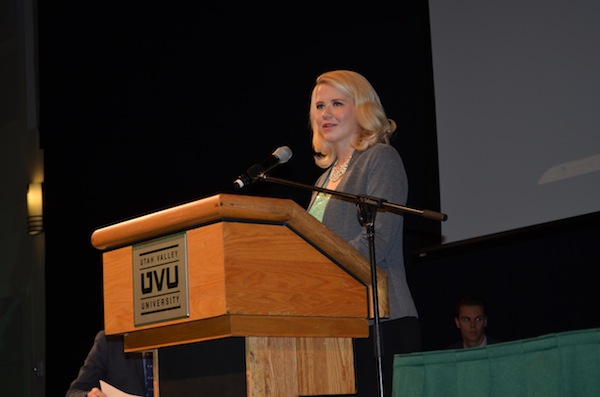 Utah native Elizabeth Smart shared how she has risen above and worked through the traumatic experience of her kidnapping 12 years ago during her speech to UVU students and community members.

“One thing we all have in common is we all have problems,” Smart said. “When we have struggles in life, we have to make a choice. We can give up and say, ‘OK, I can’t deal with this right now so I’m going to crawl back into bed, pull the covers over your head and hibernate.'”

Twelve years ago, Smart was a 14-year-old who was happy to be a wallflower, not to be noticed and content being a nobody. She had aspirations of going to college, studying music and teaching harp lessons.

She was thrilled about her upcoming junior high graduation, and she had convinced her parents to allow her to go on a graduation trip with her best friends.

But she had another journey ahead of her, starting with a voice in her ear while she laid in her bed saying, “I have a knife at your neck. Don’t make a sound.”

Smart’s initial reaction to the situation was that she would be one of those kids from the news stories she’d seen on TV — the child who never comes back alive.

There was a point on her hike to the mountains with her captor that she stopped, turned to him and said, “If you’re just going to rape and murder me, can you just do it here?”

After her captor first raped her, she worried how long she would be in this camp. Days, months, years? What if there came a time she didn’t remember who she was or her family?

She then began thinking of everyone who was most important in her life. She instantly thought of her mom and everything she had ever told her and all they had done together.

It was then when Smart made a decision that helped her survive nine grueling months. She recalled her mom saying that there are only a few people’s opinions that really count.

The realization struck Smart that no matter what had happened, at the end of the day her mom and dad would always love her.

She held dear to this as she no longer was called Elizabeth, couldn’t speak of her family or mention her life before her captors. She continued to hold on because no matter what the captors did, they could never take this love away.

“When I first made that realization, I made up my mind that because I had something worth surviving for, worth living for, I would do whatever I could to survive. This decision saw me through nine months of a lot,” Smart said.

After Smart swayed her captors to return to Salt Lake, they were apprehended by the police and Smart was reunited with her family. Her mother had more advice to give that would get Smart through the next stage of her journey.

“What this man has done to you is terrible. There are no words to describe how wicked and evil he is. He has stolen nine months of your life you will never get back. The best punishment is to be happy,” her mom told her.

Smart ended her speech at UVU with one of her favorite quotes from Mother Teresa: “I know God won’t give me anything I can’t handle, but sometimes I just wish he didn’t trust me so much.”