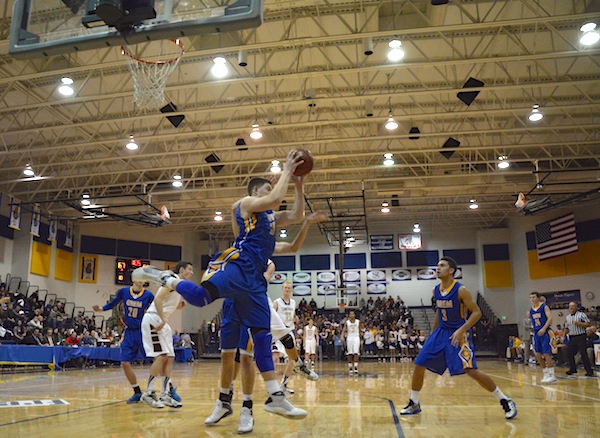 Orem High’s Dalton Nixon, who now plays for BYU, rebounds the basketball in a game against Lone Peak High School during the 2013 FreeTaxUSA Tournament. (Photo by Rebecca Lane)

The 4th annual FreeTaxUSA Shootout is back this year with two 2014 state champion teams and more of the best high school basketball teams in the west.

“What we’re most excited about is the demand that we’ve had. We now have teams calling us and wanting to be a part of the tournament,” said Orem coach Golden Holt, who is the tournament director. “The tournament has a bright future. Our partnership with FreeTaxUSA.com has allowed us to brand the tournament and become an event that teams from all over the country want to play in.”

Colorado teams Denver East, who won the tournament last year, and Overland, who is ranked as the top Colorado team this year, are out-of-state teams returning for this premiere basketball tournament. Kahuku (Hawaii) and Richland (Washington) are the other two teams filling out the tournament bracket.

Both Lone Peak and Denver East won the 5A state championship in their respective states.

“This is one of the best tournaments in the West. Golden and his staff continue to bring in high quality out-of-state teams year after year,” said Lone Peak coach Quincy Lewis in a press release. “This year’s tournament offers some really fun diversity with teams from Hawaii, Colorado and Washington State. I think that makes it really interesting.”

While there are many players in the FreeTaxUSA Shootout to keep an eye on, two players stand out from amongst the crowd.

All tournament games will be players at Orem High School.

Tickets cost $10 for adults and $5 for senior; the tickets are good for the entirety of the day they are purchased.