Home BusinessQ Cover Women at work: Talk of the Tech

Women at work: Talk of the Tech 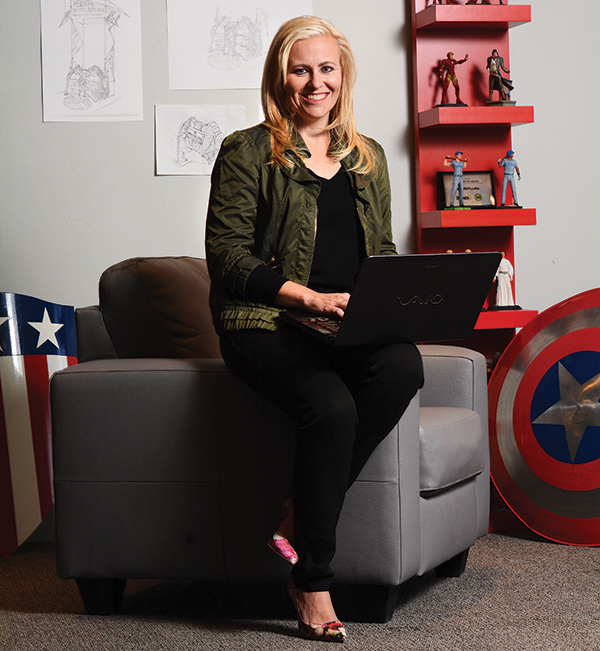 Cydni Tetro had worked at some of the coolest companies including Novell, FamilyLink, Disney and 3DPlusMe. (Photo by Dave Blackhurst)

This is one out of five stories in the Utah Valley BusinessQ series “Women at Work.”

In 1996, there were three women in Cydni Tetro’s graduating class at BYU.

“My dad gave me great advice,” Tetro says. “He told me, ‘Who knows what you’re going to do in your life. But a technical background can give you the skills to do anything you want — skills that will get you jobs.’”

Ever since Tetro graduated, she’s been in demand. From Novell to FamilyLink to Disney to 3DPlusMe (and many things in between), Tetro has been at the forefront of the top trends in the coolest companies. Plus, in her not-so-spare time, she has founded the Women Tech Council and served on boards like the UVEF and the BYU Center of Entrepreneurship and Technology.

“Throughout my career, my core skill set has been the ability to creatively problem solve,” Tetro says. “You can’t know everything, but you can know the skill sets to figure it out.”

BusinessQ sat down with Tetro to decode her tech past, to Marvel at her impressive network, and to find out what she wants her three kids to learn about getting the job done.

“I had always been a math girl. It was my thing,” Cydni Tetro says. “And my parents were so great about supporting that.”

In high school, she did an internship at WordPerfect.

“I loved computers and I knew I wanted to go into that — even though I didn’t really know what that meant.”

Tetro graduated from BYU and got a hundred job interviews.

“Everyone wanted to interview a female in computer science,” she says.

Ultimately, she took an offer from Novell in technical support. It was a good fit, and they were willing to work with her daytime MBA schedule at BYU.

After grad school, Tetro stayed at Novell and moved over to product management — and loved every minute of it.

“This was a time at the company when competition was really heavy with Microsoft,” she says. “We were defining really important products, and I got to be super active in all of those conversations. It was unbelievably exciting.”

[pullquote]“With a career you build a network. And if you do it correctly, that network is with you forever. Sometimes you help them, and sometimes they help you — but working with great people is key.” —Cydni Tetro, Founder of the Women Tech Council[/pullquote]

Tetro left Novell in 1999 and headed to startup land.

She jumped into NextPage, where she directed the strategy and execution of their product and marketing initiatives.

Then she moved to FamilyLink, a social network for families with more than 80 million users (it eventually sold to Ancestry.com).

“What an amazing team of people,” Tetro says. “It was right at the early days of social media. We rode the entire wave of what happened with Facebook, and our user acquisition exploded.”

Next up? The happiest career on earth.

Tetro joined Disney as an entrepreneur in residence.

“It was an opportunity to focus on technology commercialization,” she says. “It was so cool to work on a worldwide stage where the consumers are so passionate. You can gather data at an incredible pace.”

Today, Tetro is leading the forefront of another up-and-coming technology trend: 3D printing. Her Pleasant Grove-based company, 3DPlusMe, offers a personalized 3D printing experience for consumers. In less than two years — and only six months on the market — the company has acquired licensing deals with companies like Marvel and Hasbro, and they’ve had their 3D printers at everything from the World Series to San Diego Comic-Con to Walmart.

“It’s been insane,” Tetro says. “The 3D business is a new horizon for consumers, and we’re at the forefront of it with the world’s biggest brands. It’s a very unique place to be.”

“Great opportunities funnel other great opportunities,” she says. “With a career you build a network. And if you do it correctly, that network is with you forever. Sometimes you help them, and sometimes they help you — but working with great people is key.”

Like any good entrepreneur, Tetro saw a hole — and filled it.

“I was talking with a few of my senior executive women friends, and we saw this need for a community of women in technology,” she says. “There wasn’t a natural place where women could learn from each other and create relationships. It was up to us.”

“We said, ‘We’re a group that brings women together. What would be valuable?’” she says. “They told us to focus on how women impact the technology economy. It became our charter right then and there.”

That was in 2007. Seven years later? The Women Tech Council is a national group of more than 4,000 women. And at their last Women in Tech awards, they had 800 people in attendance and recognized 115 women.

“These are great businesswomen,” Tetro says. “They are innovators and entrepreneurs who literally build rocket ships. And they don’t have a platform for recognition at this level. We can give that to them.”

“Gender has really never been an issue for me at work — and I realize I’m saying this as the co-founder of the Women Tech Council,” Tetro laughs. “But I rarely ever think about it. I simply work with amazing people who do amazing things. I’ve never had to work harder. I’ve simply had to perform.”

Tetro notes a few differences between men and women at work — with an emphasis on few.

“I do believe it’s harder to raise funding as a woman — it’s just a community that women traditionally haven’t been a part of. That’s going to take time,” she says. “And there’s been a few instances where I’ve had to prove myself a little more — where I’ve had to prove that I’m not the assistant sitting in the room. But that has truly been the exception for me, not the norm.”

Dwelling on those exceptions is the real problem, Tetro says.

“It can be a trap to think about it too much. My core mantra: Lead with fact — not emotion.”

“I don’t know anyone who is a working mom who’s not struggling to find the right balance,” says Tetro, who is a mother of three. “Sometimes I’m really good at it, and other times? Not so much.”

Tetro’s secret weapon? Talk it out.

“We have an open dialogue with our kids. My family is my first priority — and they know it,” Tetro says. “I schedule my travel around games and performances. Before I had kids, I’d take an early flight and go see the city. Now I take the red eye there and get the first flight home.”

Even still, it’s not easy.

“We are not perfect. There’s a constant struggle. Sometimes we’re doing homework over FaceTime. And my kids aren’t those kids in bed by 8:30 p.m. We’re usually just getting started,” Tetro says. “Then there’s questions like, ‘Should I be room mom at the school?’ My mom was state PTA president — we’re all about public school and the PTA in my family. But all those meetings are during the day. It’s hard to figure out the best way to contribute to your ecosystem when your timetable is different from other parents.”