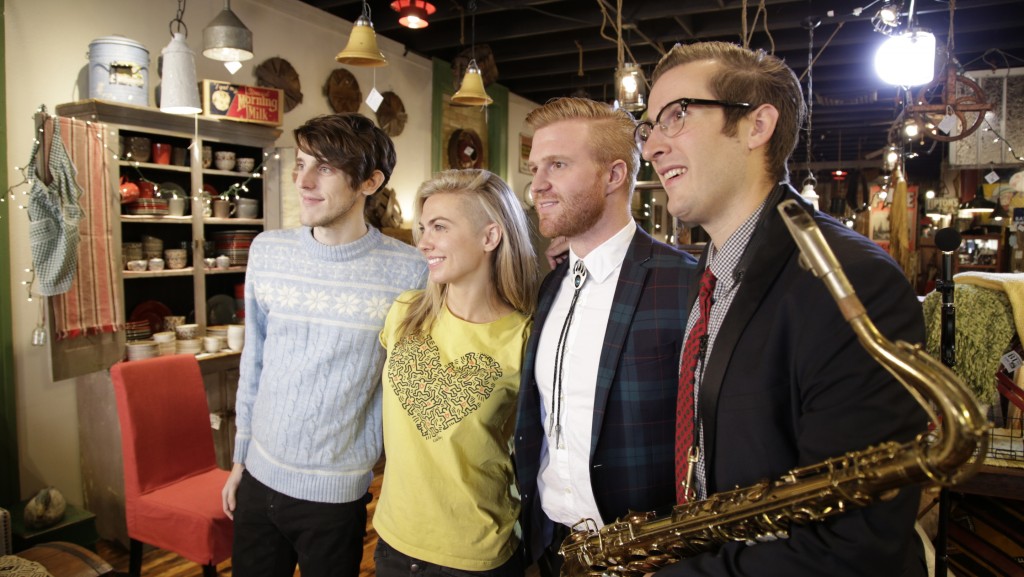 Mindy Gledhill and members of The Strike pose on the set of the Provo Christmas Concerts. Local musicians donated their talents to an album with 100 percent of the price going to the United Way of Utah County’s Sub for Santa program. (Photo courtesy Provo City)

Christmas is a season of giving, and this year, Provo City is sharing the gift of its vibrant music scene and charity with the world.

What started as a handful of music videos to promote local musicians and the Christmas spirit blossomed into an effort to raise $30,000 for the United Way of Utah County’s Sub for Santa program.

The Provo Christmas album features a variety of Christmas tunes from 11 local artists, including Ryan Innes, Mindy Gledhill, Joshua James and Fictionist. All of the album’s $10 price will go to Sub for Santa, which provides gifts for thousands of children, elderly and disabled people in the Utah County area.

“As we listened, we realized that something magical was happening,” said Deputy Mayor Corey Norman. “In a meeting with the mayor, we decided to blow this up as big as we can.” 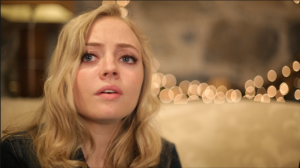 Singer Madilyn Paige sings “The First Noel” in one of the Provo Christmas Concerts. (Photo courtesy of Provo City)

“The reason it’s grown is because everyone who hears or touches it gets excited,” Curtis said. “I think we’ve started a tradition. … There were so many (interested musicians), we’re hoping to roll them to next year.”

The music video series was the brainchild of Brian Nye, a city employee who approached the mayor’s office with the idea last year, Norman said. Nye, Norman and several other city employees — along with all of the featured talent — donated countless hours to produce the album and videos in a matter of weeks. Downtown Provo businesses Unhinged and Block 100 Antiques and Mercantile opened their doors for filming the corresponding music videos, and a donor in Draper gave $1,500 to cover production costs.

Provo’s talent pool spans a variety of styles sampled on the CD, with each putting their unique twist on even the most traditional of Christmas tunes.

Nothing showcases this more than the album’s bookended versions of “Silent Night” — one jazzy and smooth from Ryan Innes, one space-age synthesized from Fictionist.

“It takes you back to the ‘80s,” said Fictionist’s Robbie Connolly. “I feel like it was a good blend of organic and robotic.”

Although the CD is a local labor of love, its reach has extended across the globe. Curtis said orders have come through the United Way’s website from such far-flung regions as Australia and the United Arab Emirates.

One former Provo resident, Dawn Anne Gill, emailed her thanks to Mayor Curtis for giving her a taste of home from the Middle East.

“More than anything, these Christmas concerts have helped bring the Christmas spirit (and remind us how proud of Provo we are)!” Gill wrote. “Enjoying Christmas the traditional way is difficult here because (1) it’s a Muslim not Christian country and (2) much of what we want to watch and listen to is restricted. Thank you for this gift! We have enjoyed every single one of the songs/videos — especially because they are local and/or filmed locally in Provo.”

Supporting the local art scene and showing off Provo’s revitalized downtown are par for course in Curtis’s administration. The mayor has been a driving force behind Provo’s popular Rooftop Concert Series and other efforts to tap into the area’s plentiful talent.

Connolly said the mayor showed up at Fictionist’s album preview party — and even sported a Fictionist shirt.

“I think people know how much the arts can lift up an area, and I think it’s really cool when leaders can see that and become a part of it,” Connolly said.

Home for the holidays: 4 tips to enjoy a harmonious holiday Next post