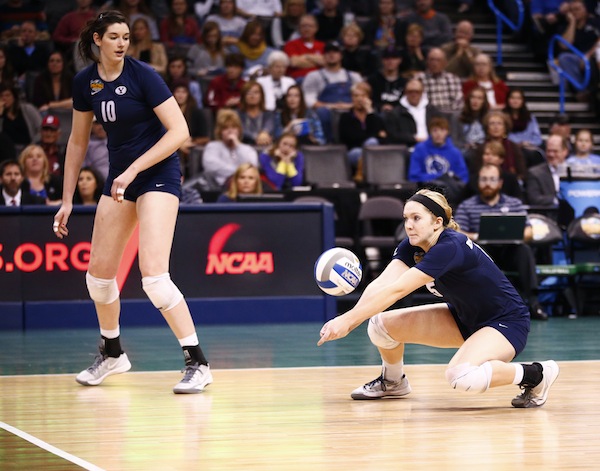 The Cougars fell 3–0  to No. 5 Penn State Saturday night after making history as the first unseeded team to make it to the NCAA National Championship game.

The Cougars struggled to find their rhythm in the first set. Middle blocker Amy Boswell and right side hitter Jennifer Hamson carried the Cougars on the attack.

We didn’t play well at all and we were right there. Let’s put it all together get set 2! #WhyNotUs

With the score 19–24, the Cougars fought to come back with kills by Boswell and outside hitter Tambre Nobles. It was too late in the game and Penn State won the first set 25–21.

Gaining moment in the final points of the first match, the Cougars carried their late run into the second set. Hamson continued to lead the team in kills and became the clear go-to player no matter if she was in the front or back row.

Outside hitter Alexa Gray also found her way out of a slump getting 6 kills in the second set after tallying one kill in the first set. With the joint effort, the Cougars led for most of the set until the score was tied at 20–20. Service errors from both teams and aggressive attacks led to a Penn State win at 24–26.

“It’s not like we haven’t played down before,” Hamson said going into the halftime. “We’re just going to relax and play our game.”

Coming out of the locker room the Cougars were able to hang with Penn State for the first few points, but then the game slipped away from them.

Service errors plagued the Cougars as they combined for 7 missed serves. On the other side of the net, Penn State is the best serving team in the country, ending the game with 4 service aces.

BYU head coach Shawn Olmstead ran out of timeouts early in the final set, which left the Cougars struggling to stop a five point run by Penn State.

Hamson ended with 14 kills and Gray had 9. Both Boswell and Nobles contributed 7 kills. Boswell and Young both had 3 blocks.

This is Penn State’s 6th title in the past 8 years and its 7th national championship ever.

Despite the loss, Cougar fans continue to support the players and their history-making season.

These @BYUwvolleyball ladies have a lot to be proud of. Great season, great playoff run. Fun to watch and great to root for. #GoCougs