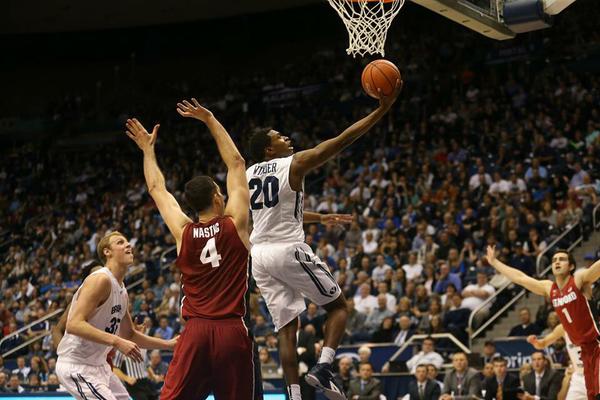 BYU guard Anson Winder drives to the hoop for a layup against Stanford at the Marriott Center on Dec. 20. (Dan Haslam/Twitter)

The big question entering Saturday night’s game against the visiting Stanford Cardinals was if Tyler Haws would play. The answer soon became clear as he entered the floor — a game time decision — and nailed a jumper to open scoring nine seconds into the game.

And here we thought the “serious” ankle injury sustained in the closing minutes of the BYU win over Weber State was going to hold him back until Gonzaga on Saturday.

And if there were lingering affects to that ankle, it didn’t show in the Cougars’ 79–77 win Saturday night, as Haws reached double figures in the first half alone, scoring 13 points, including 3 threes. It was a bit like this after the first 20 minutes.

But, as much as Haws’ 23.8 points per game is an invaluable component to the success of the Cougars, a larger concern looms over the head of head coach Dave Rose: balance, which hasn’t always resulted in losses but certainly affected them in recent games against Hawaii (win) and Utah (loss).

The second half did wonders for the Cougars in this regard, as four cougars scored in double Cougars, led by Haws’ 24. Chase Fischer added 16 points on 6 of 14 from the field, and Kyle Collinsworth stuffed the stat sheet with 15 points, 10 rebounds and 7 assists.  Anson Winder came up huge late with 13 points, getting to the line 10 times, making 6.

Haws has now scored in double-figures in 30 straight games.

The Cougars (8–3), who are 9–0 when scoring 90-plus points, were probably hoping for an offensive shootout similar to last years’ 112–103 thrilling win at Stanford a year ago, but this one was much tighter, as it went back and forth all night.

BYU leading 36-35 at the half. This game is going pretty darn well! #BYUhoops #IBleedBlue #ImLovinIt

The “darn well” justification could very well be props to the defense, as the Cougars have been doing better in that department as of late, holding opponents to an average of 65 points over the last three games, compared to their season average of 74.2, according to sports-reference.

The Cougars came out a bit sluggish to start the second half, losing the lead briefly, but Haws got them back in it during a 13 to 5 run over a five minute period that included six more points from Haws and a Winder three.

From there the added confidence led to better offensive flow, as Winder continued his successful senior season  by taking it coast-to-coast for the easy layup to give the Cougars a 61–52 lead with 8:50 left.

@AnsonWinder20 is a BEAST out there. Looks faster and more confident than ever. Get this W cougs! #BYUvsStanford

The Cardinals then used a 5–0 run to force a BYU-timeout, of which the Cougars came out of to dominate the next four minutes, stretching the lead back to 72–59 advantage as part of a 11-to-2 run that ended in a Fischer scooping up a loose ball in the paint that got the Marriott Center roaring.

Instead of defering to Haws in the final five minutes, Winder and Fischer took control, combining for 10 straight points between 5:37 and 1:45 as the Cougars held off the Cardinals’ comeback bid in the final minute.

The biggest test of the season has yet to come, as the Cougars face off against UMass on Tuesday before opening conference play Saturday night at home against No. 8 ranked Gonzaga, in what is sure to be another thriller.