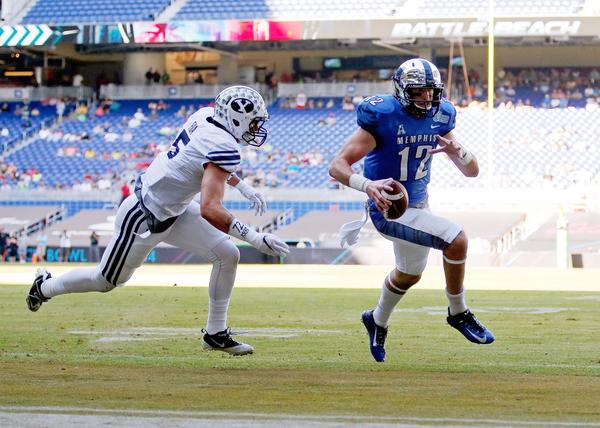 The Miami Beach Bowl was a bloody affair.

It smeared across the face of Memphis’ tight end Allen Cross during pregame. He had just finished pounding his helmetless head across the face masks of his teammates like a warrior — this wasn’t going to be a walk along the beach for either side.

The Cougars and Tigers combined for nine turnovers in this bowl game. Nine. The impact of those turnovers leading to points nearly every time. None bigger than Zac Stout’s 19-yard pic-six that gave the Cougars a 45–38 lead with 7:48 to play.

The same, though, could be said of Memphis’ Keiwone Malone, who retied the game at 45 off a 5-yard pass pass from Paxton Lynch with 45 seconds remaining, forcing overtime. And then the Tigers’ steady kicker Jake Elliott matched the career-long 45-yard kick from Trevor Samson that put the Cougars up 48–45 with his own of 55-yarder to force a second overtime period.

The hero: Memphis’ DaShaughn Terry’s, who’s interception off Christian Stewart short of the end zone gave the Tigers the 55–48 double-overtime win that led to a classless fight between sidelines.

The drama started long before that final interception though, as the inaugural edition of the bowl had everything you could ever want in a bowl game … including nine turnovers.

The Cougars and Tigers got off to hot starts, notching the game up at 14 apiece with 7 minutes gone in the first quarter, courtesy perfect passing from senior quarterback Christian Stewart and a little bit of slippery route-running from senior wide receiver Mitch Mathews.

The true story, through the first half anyway, was the lack of defense from both teams. That is until Memphis quarterback Paxton Lynch was stripped by Manus Pikula inside the BYU 10, then recovered by Jordan Leslie. The Tigers entered the game 5th in the country in points against (17) and hadn’t turned the ball over in over eight consecutive quarters. The Cougars then turned the ball over inside two minutes to the quarter break on Christian Stewart’s first interception of the game.

"@MasonMBishop: Really Bronco? This is the best D you can put on the field? #BYUfootball #BYUvsMEM" Why would it change today? #usedtoit

The Cougars lost the magic they had in the first quarter. It was stolen by Memphis’ tight end Allen Cross.

So Cross did that pregame. Still, the man has no helmet.

And on fourth-and-short Christian Stewart delivered a beauty to Jordan Leslie inside the left pylon for a 23-yard touchdown. Cue the lost magic…

Leslie was penalized for taunting following the play for swinging his arms around as if it was a home run. This is football, Jordan. Head coach Bronco Mendenhall was not amused.

I guess you can’t if you’re playing football. Luckily, the Cougars started doing just that, intercepting Lynch on the Tigers’ next drive that resulted in an Paul Lasike touchdown from three yards out to give the Cougars a 28–24 lead with 3:11 to play. 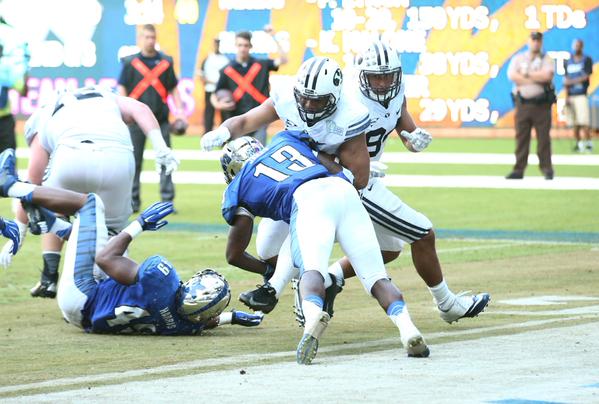 BYU running back Paul Lasike rushes the ball in for a touchdown against Memphis in the Miami Beach Bowl. (BYU Photo)

The momentum shift didn’t carry over into the second half. The Tiger’s marched 71 yards in 5:10 to open second-half scoring, led by an error-free Lynch that completed 3-of-3 passing and eventually rushed into the end zone for a 1-yard score, his third of the day.

The Cougars ended their next two possessions with an interception and a forced three-and-out, giving way to another Memphis score via a 17-yard pass to Cross to put the Tigers up 38–28 with a quarter remaining.

Memphis committed another turnover to get the Cougars rallying behind a solid drive in which Stewart completed a 41-yard pass to Devin Mahina that set BYU up at the five-yard line, but came away with only a field goal. To this point the Cougars rushing attack was nearly obsolete.

That was telling. 3 and out from the 5. No run game is all too evident and damaging. #BYUvsMEM

Down 38–31, the Cougars battled back, recovering their own kickoff by forcing a fumble recovered by Chris Badger at the Memphis 26-yard line. Stewart then passed over the top to Paul Lasike for 19 yards who, on the next play, dived into the end zone from seven yards out to tie the game up 38 with 10:52 to play.