Women at work: The Big Picture 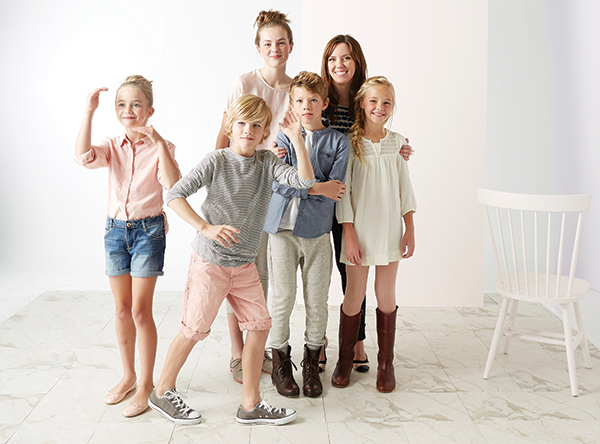 Nicole Hill Gerulat poses with some of the kids from her photo shoot. Nicole is a freelance photographer who has shot for clients like Real Simple, HGTV, Parents Magazine and US Weekly. (Photo by Leah Aldous)

This is one out of five stories in the Utah Valley BusinessQ series “Women at Work.”

It should have been chaos.

At the center of it all? One calm instructor, commercial photographer Nicole Hill Gerulat.

She volleyed style questions. She reassured parents. She clicked with the kids. And she taught her students what it’s like to capture magic amidst the madness.

“The more people on set, the happier I am,” says Gerulat, who has shot for clients like Real Simple, HGTV, Parents Magazine and US Weekly. “I thrive on that energy.”

Thrive has certainly been a theme in Gerulat’s decade-long career. The 29-year-old graduated from both photography and culinary school, interned with renowned photographers, teaches an advanced commercial photography course at BYU, has written two photography books, and started an online education program called Nicole’s Classes, where she and other top instructors cover everything from photography to food styling to branding for students all over the world.

In sixth grade, then-Nicole Hill asked for a camera for her birthday.

In seventh grade, she wanted to be a portrait photographer — a perfect “mom job” where she could set her own hours.

By eighth grade, she had taken all the photography classes offered at school.

And in ninth grade, she became a T.A. so she could have access to the dark room.

“I even had the blueprint to my future studio,” she says.

“I was a straight-A student, and I was always doing extra credit,” she says. “I wanted options for college.”

Sophomore year of high school, she found her option — Brooks Institute of Photography.

“I wasn’t too into the social scene of high school, so I decided to graduate a year early and head to Brooks in Santa Barbara,” she says. “I’m an impulse decision maker.”

“I’d be in the dark room until midnight on a Saturday,” Gerulat says. “It was my life — classes, shooting and reshooting.”

After a year and a half, she was burned out.

“My family loves cooking. And we love food,” she says.

So she went to culinary school at night, and interned with famed beauty photographer Matthew Jordan Smith during the day.

“That’s when I realized commercial work was right where I wanted to be.”

After culinary school she returned to Brooks to finish her degree — with a renewed focus.

“My perspective was different because I had been on real sets,” she says. “My food photography professor didn’t like me. He was old school, and I was into clean styling and natural light. That’s when I decided to put together a portfolio for myself. The straight-A thing went out the window, but I knew if I spent my time pleasing my professors and not myself, I’d have nothing to show for it.” 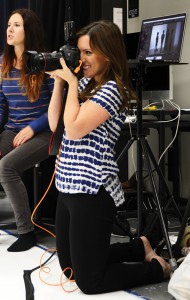 Gerulat graduated from Brooks in December 2005. And after internships with America’s Test Kitchen and Saveur Magazine, she moved home to Orem to take a break.

“I was so bored,” she says. “So I got a job at RubberBall as their photo editor. I had access to the studio, played with lights, and wore multiple hats in styling, production and design. I created a portfolio that gave me immediate clients.”

She married Adam Gerulat in October 2008, and they moved to San Francisco. She immediately started freelancing.

Two years later, they moved back to Utah so Adam could go to law school. Gerulat was seven months pregnant — and on fire.

“Whenever I’m pregnant, I get the most work of my life,” she says. “So at eight months pregnant I was still traveling back to San Francisco for shoots.”

That trend continued when she was pregnant with her second.

“I shot the cover for the book ‘Playful’ on a huge ladder when I was basically a hundred months pregnant,” she says. “Anything to get the shot, right?”

As a freelancer in San Francisco and New York — living in Orem — Gerulat knew she needed to stay relevant in an ever-changing industry. So she flew out every quarter to meet with creative directors and art buyers.

When she wasn’t coast hopping, she was working on her blog — A Little Sussy — which, in 2007, was somewhat of a marvel.

“Back then there were, like, four of us bloggers in Utah — and we all just kept linking to each other,” she laughs. “My goal was to introduce my photography in a new forum, and then a business fell right into my lap.”

Class of its own

“Nicole’s Classes was a happy accident born out of my blog. I constantly got questions about my photography and how to shoot, so I opened up my basement and filled four classes immediately.”

Those basement classes eventually turned into  “on the road” classes across the country.

“It was our bread and butter for a while,” Gerulat says. “And because of the demand, it made sense to take our classes online.”

The online curriculum (which runs around $130 per class) effectively killed the live courses, but it opened up a worldwide market.

“We’re huge in Australia and a few European countries, and it’s been such a fun adventure,” she says. “Every instructor is carefully selected and carefully curated. We are not the company with geeky teachers wearing Tivas and pocket vests while they spout technical jargon. We’re the company that teaches you to be technically proficient in as simple terms as possible.”

And as for A Little Sussy?

“I actually don’t consider myself a blogger anymore. I don’t have time for it,” she says. “Plus, the blogging landscape changes daily. I’d much rather focus on building my portfolio, my brand and Nicole’s Classes.”

As the mother of a 4-year-old and a 1-year-old, Gerulat is moving at all kinds of shutter speeds. She travels to New York and San Francisco regularly — oftentimes with her kids in tow. And her Orem days are filled with well-developed structure.

“I have shoot days and normal days. On normal days, I have a sitter for my kids in the morning so I can get through email, manage Nicole’s Classes and prepare for my BYU students. I structure my days around work hours and mom hours. And for the most part, I’ve been successful at keeping them separate.

“I call my sitter a family assistant, and she helps with my kids and keeps my house in order. Things just go better when I have a consistent babysitter. I feel balanced, and I’m a happier person. I’m willing to give up money for my sanity.”

“To be perfectly honest, I struggle with the working mom thing. I support it — to a degree. It’s wonderfully empowering and women should have something separate from their kids to give them a different sense of self worth,” she says. “But I’m also the person who thinks moms should generally be there when kids get home from school. I see the value and consistency of that. Mommy guilt is there for a reason. We need to listen to it and readjust when things aren’t working.”

What’s more, Gerulat has learned an empowering word: No.

“I’ve tried to be selective with the jobs I take, because when I’m walking through the airport for the 18th time that year, I’m always asking myself if it’s worth it,” she says. “I don’t want to be away from my kids for work that doesn’t have meaning to me. So I try to get the best clients who will advance my career in the right way. My heart breaks for working moms who don’t have choices.”

Portrait of a woman

“You know what I think? Women can dream bigger,” Gerulat says. “Even when my business first started, I didn’t have any understanding of how far it could go. I could have reached it so much faster if I had.

“In regards to capability, gender shouldn’t even be a consideration. So dream. And dream big.”