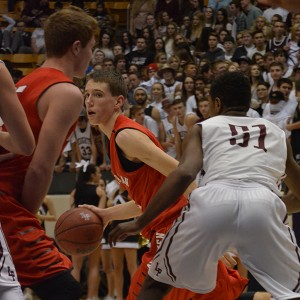 In front of more than 4,000 students and fans at BYU’s Marriott Center, American Fork junior Spencer Johnson carried the Caveman to a 77-73 double overtime, upset victory over the No. 1 ranked Lone Peak Knights.

Johnson, made an impressive 16-of-17 free throws and finished the game with 33 points, all the while being face guarded by a host of Lone Peak Knights.

On the Lone Peak side, junior guard Frank Jackson was also face guarded and often double and tripled-teamed on his way to a 34 point performance before fouling out with 3:04 left in the second overtime.

The real difference in the game was free throw shooting. As a team the Caveman made an amazing 25-of-27 free throws (93 percent) while the Knights shot 25-of-37 from the line (68 percent).

As the final second ticked off the clock the American Fork bench exploded onto the Marriott Center floor and celebrated with each other and its fans.

The win brings American Fork’s record against Lone Peak to 2-16 in the last 18 regular season match ups dating back to 2007.