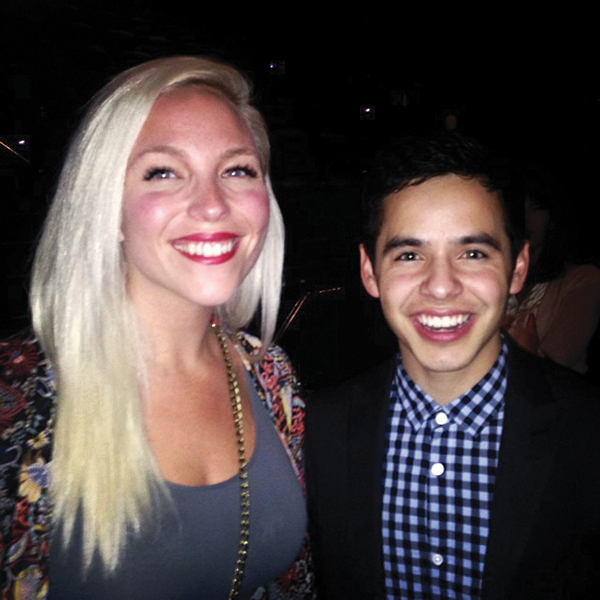 Stephanie Mabey said she was excited to hang out with David Archuleta at the premiere of “Meet the Mormons” — “so we could high five each other,” she says.

When “Meet the Mormons” was released in October 2014, much of the buzz was about David Archuleta singing the story to a close with “Glorious.”

“Everyone plays a piece and there are melodies …”

David’s “piece” was adding his smooth, recognizable tones and celebrity name, but the writer who began the symphony was Highland’s Stephanie Mabey.

“Early on in the process, the movie producers brought a wide spectrum of songwriters together and said they wanted good music that communicates with people,” Stephanie says. “I had this feeling ‘Glorious’ would be part of ‘Meet the Mormons,’ but I was reluctant to share it with them because I hadn’t written the song for one group of people to call their own. It’s from my ‘Wake Up Dreaming’ album, which is not religious.”

Two days later, movie producer Jeff Roberts found “Glorious” on his computer even though Stephanie hadn’t sent him the song, which she originally wrote while her personal world was falling apart in a divorce.

“At first, they wanted to use my version,” she says. “But then they wanted to speed the song up by 20 beats per minute and they asked me to re-record it.”

Stephanie tried but struggled to sing two versions of the same song. When it was time to re-record, she came down with laryngitis. Everything pointed to having another singer bring “the sounds that are in their hearts.”

A team from “Meet the Mormons” flew to Chile to record David Archuleta singing “Glorious” while still on his full-time LDS mission. David called Stephanie while en route to the recording studio.

“He said, ‘Stephanie, this is David Archuleta,’” Stephanie recalls. “Then there was this crazy sound and he screamed because the car window was blowing off.”

Although Stephanie had always envisioned herself writing music for other singers, she didn’t originally pen “Glorious” for that purpose. Or for a male voice.

“But it is really satisfying to hear what feels like a different translation of my song,” she says. “When I see how it has resonated with so many people, I know David was the key part in having a lot of people hear it. I deeply believe we are all connected.”

Stephanie’s connection to a friend at MTV has led to multiple opportunities for worldwide viewers to hear her music — including “Glorious,” which was first heard on the final season of “Jersey Shore.”

Stephanie says it’s actually a relief she can’t predict the timing of her success or her life’s journey.

“Growing up I was terrified by everything, but now I’m excited about the unknown,” she says. “I’m working on a video called ‘It’s Not Over Till You Say So,’ and that’s the way I’m choosing to live. I thought I wanted my life to be this sheltered, safe existence, and yet all along I’ve been creating a big adventure for myself.”

12 ways to save big on groceries (without coupons!) Next post