Becky Lockhart honored at State of the County address 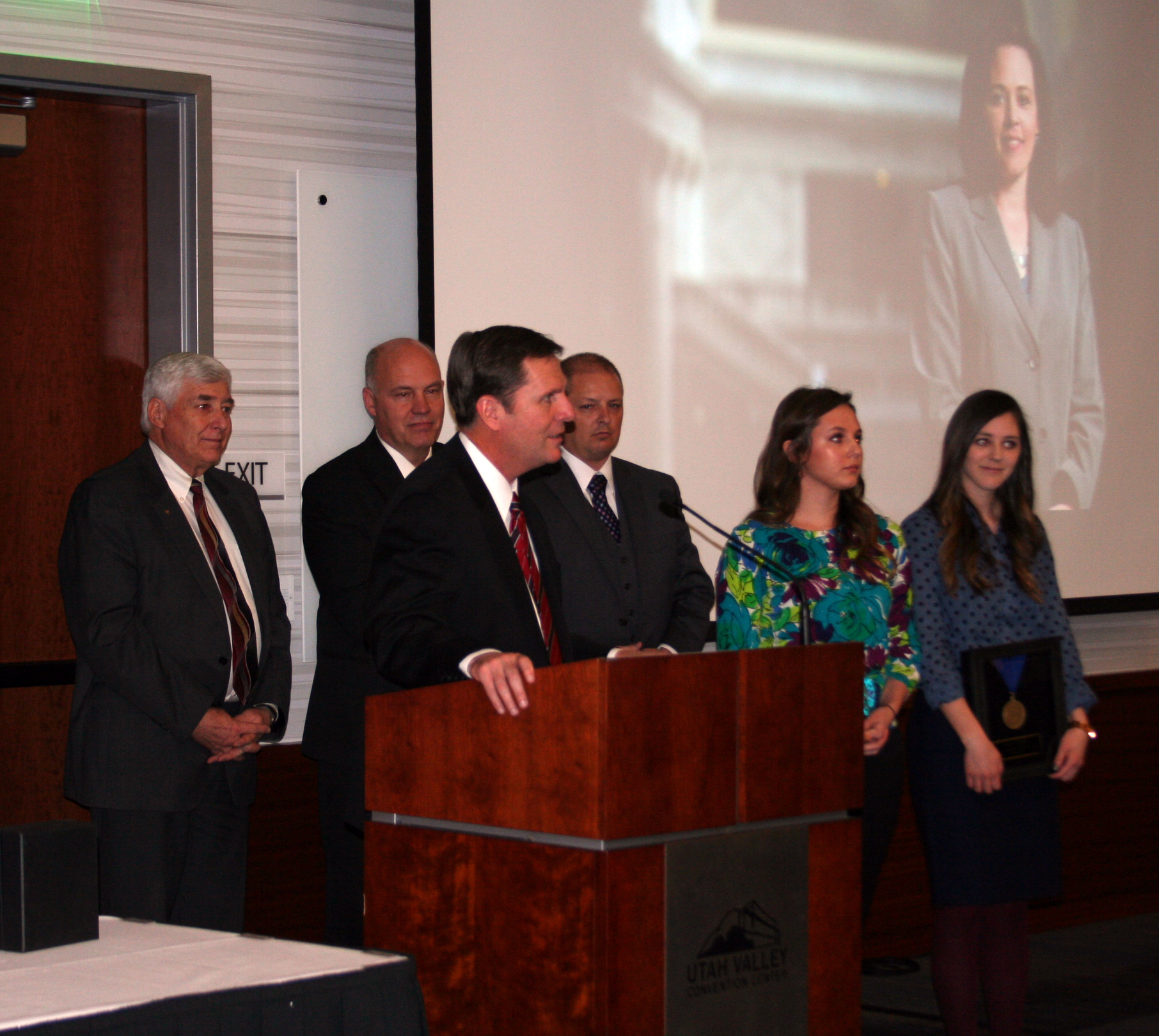 Stan Lockhart speaks to the audience after being presented with the Commissioner Medal of Honor for his wife, former Utah House Speaker Becky Lockhart, who died on Saturday. (Photo by Candi Higley)

Becky Lockhart, former Utah House speaker, who died at her home on Saturday from an extremely rare neurodegenerative brain disease, was honored at the State of the County address on Tuesday afternoon. Lockhart was chosen to receive the Commissioner Medal of Honor. Lockhart’s husband, Stan, and two daughters, Hannah and Emily, were present to accept the award.

Stan Lockhart shared a story about his wife telling him she planned to retire after finishing her term. He told her that it was the stupidest political idea he had ever heard.

“But I told her if she was feeling prompted by the holy spirit, than she needed to go do that,” Stan Lockhart said. “She was very calm and serene in that. I think we got an answer of what God wants her to do.”

“She tried to build those up around her,” Stan Lockhart said. “She would be saying, ‘Take an Advil, buck up and move on people.’ On behalf of her and our family, I just want to say thank you.”

“We all know that Becky has passed on to her next state in life and is preparing the way for all of us yet to follow,” Ellertson said. “It is with great pleasure that we recognize Becky and the history and service she has given to those of us in Utah County.”

Jim Loveland with Xactware, was honored with the Business of the Year Award presented by the commissioners.

Xactware was started in 1986 and Loveland said the business is a true Utah County success story.

“I have watched it go from a handful of employees to 600 employees,” Loveland said. “I still pinch myself in disbelief. It is a real tribute to the community we live in. It is a wonderful place to be a business owner and to be in the high tech industry. Thank you for this award and this great place in which we live.”

During the address, Ellertson shared the 2014 successes of departments throughout the county. A video presentation also gave a look back at what took place in 2014.

“We are interested in the well-being of the citizens,” Ellertson said. “We are appreciative of all the activities going on county wide from Silicon Slopes to new business activity in Payson and Spanish Fork.  We want it to be a benefit to live, to work and to raise a family here.” 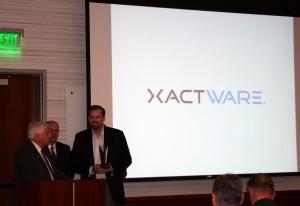 Commissioner Larry Ellertson presents Jim Loveland with the Business of the Year Award for Xactware. (Photo by Candi Higley)

“Utah County played vital roles in World War II, Geneva Steel and with those who served in the armed forces,” Lee said. “I want to pay tribute to the armed forces and our local law enforcement. They stand between us and anarchy. They provide us the opportunities to walk the street and feel safe, and I thank them. I enjoy being here in this county. It is a wonderful place to live.”

Graves addressed the Lockhart family and told them that he hopes to follow in Becky’s footsteps and then spoke about his opportunity to work with people in the county.

“It has been a privilege to meet with department heads, employees and leaders who are hardworking and passionate,” Graves said. “Our county employees and citizens make this such a great place to live and work. The sheriff’s office are dedicated servants who keep us safe and protected and work around the clock. Many of them are unsung heroes and it will be a privilege to work with them and get to know them. I intend to serve you with the same dedication and integrity I have seen so many of you give to me.”

The commissioners have many goals for 2015 and say they plan to be actively involved in many efforts including some of the following: “planning for and implementing multi-modal transportation systems improvements; continuing efforts to promote growth opportunities for employment and economic development; planning for and implementing improvements in our systems for dealing with incarcerated, mentally ill and other non-violent individuals and jail population management concepts; air quality issues; Utah Lake issues; and to work with citizens and community leaders throughout the county to find solutions to the many issues that arise and which can improve efficiencies in Utah County and benefits to living, working and raising a family.”

Utah County Department of Drug and Alcohol Prevention and Treatment

Untreated drug and alcohol abuse costs to Utah County citizens, businesses and government operations, including the costs of lost productivity, healthcare, criminal justice, property damage and theft, equate to $866 million per year. aDDAPT’s treatment programs for adults are shown to reduce arrests prior to treatment from 4.8 per client admitted to 1.5 in the 18 months after discharge, having a significant reduction on Utah County’s crime rate.