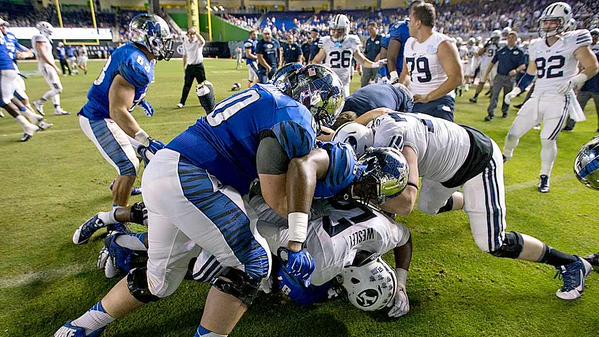 Members of BYU and Memphis participate in a scuffle following the Tigers’ 55–48 win over Brigham Young in the Miami Beach Bowl on Dec. 22. (Twitter/@SunTimesMem)

The Memphis Tigers announced today 12 suspensions resulting from the altercation that occurred following its win over Brigham Young on Dec. 22 in the Miami Beach Bowl.

“I want to thank BYU for working with us to achieve not only accountability from this unfortunate event, but also helping our teams continue to grow and develop as young men, consistent with the high expectations held by both our universities, along with the high standards of sportsmanship established by the NCAA and American Athletic Conference,” said University of Memphis President M. David Rudd.

Penalties include suspension from team activities, mandatory anger-management counseling and community service hours. The release sent out by the Memphis announced that individual game suspensions will be handed out “in conjunction with the first game of the 2015 football season.”

“We hold our student-athletes to the highest standards of sportsmanship and personal conduct at the University of Memphis,” said Director of Athletics Tom Bowen. “The actions of a few members of our football program in Miami were completely unacceptable. I can assure our community, fans and stakeholders that we have and will continue to hold our young men and women accountable and will use this unfortunate incident as a teaching tool for all our student-athletes moving forward.”

Names of players that are suspended have not been released.

In addition to the suspended activities, members of both teams involved in the scuffle will participate in a conference call to issue formal apologies on behalf of both schools.

BYU has not yet released information regarding its internal investigation on the brawl.

The race to nowhere: Should Utah kids specialize? Previous post

Becky Lockhart honored at State of the County address Next post