The race to nowhere: Should Utah kids specialize?

Children in Utah are specializing in just one sport earlier and more intensely than ever before because of increasingly competitive team politics, hands-on parents and the recent proliferation of year-round sport opportunities.

But should children and teens specialize in a single sport? Young people, parents, coaches and athletic directors have a variety of answers. The short answer is yes and no.

“Sports can be the best thing or the worst thing for kids,” said Alli Bills, former BYU basketball coach and owner of E3 Basketball. “I believe that kids who specialize in one sport before 13, by age 13 or 15, they start to get burned out.”

[pullquote]“Sports can be the best thing or the worst thing for kids. I believe that kids who specialize in one sport before 13, by age 13 or 15, they start to get burned out.” –Alli Bills, former BYU basketball coach and owner of E3 Basketball[/pullquote]

Every sport, athlete and situation is different, but timing is key. Specializing too early means peaking in junior high or high school, being ripe for overuse injuries and getting burned out.

“I think kids don’t know how to have fun anymore. It’s choose a sport and lock in now and do nothing else,” said Patrick Wiscombe of Cedar Hills, who has had two sons play at Lone Peak High School.

Wiscombe said pressure to perform is adversely affecting young athletes, including his son Brandon, who quit his high-intensity basketball team after junior season to play ultimate Frisbee and have fun his senior year.

“It got to the point where he was so over-coached that he forgot how to play basketball,” Wiscombe said of his son. “He was so afraid to make a mistake that he couldn’t play.”

Playing a variety of sports gives children both a mental and physical reprieve, offers a variety of training and experiences and helps kids discover their likes and talents. It also takes away the constant focus on weaknesses that comes with specialization.

Bills played college and professional basketball, but grew up playing a slew of sports and even earned a black belt in karate. She recommended narrowing it down to three or four sports in junior high and then down to two in high school. 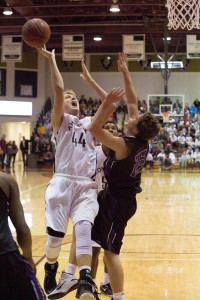 Nicholas Curtis goes up for a layup at a Lone Peak High School basketball game against Lehi High School on Jan. 9, 2013. (Photo by Dean Bailey)

Nicholas Curtis, a starting senior on the Lone Peak High School basketball team, said he’s glad he played a variety of sports while growing up and guesses he would be burned out if he had started basketball early.

“Personally, I don’t think it’s the best idea to specialize at a young age because you’re still growing and you learn new things every day and you’re not sure where your life is going to go,” Curtis said.

The nearly six-foot-five forward started soccer when he was about 5 and played some flag football and baseball, but he gave it all up after his sophomore year to focus on basketball.

“I started putting a lot of time in because it’s really competitive to be on the team here, and I really wanted to play,” Curtis said. “I also want to try playing college ball after the mission.”

Specializing at the right time will provide the best opportunity to play in college, Bills said. Young athletes will get exposure, attention and the chance to fine-tune their skills.

As a collegiate player and coach, Bills found that multi-sport athletes adjusted better to the year-round commitment of a college sport. Players who specialized early had a hard time maintaining their focus and work ethic.

For long-term success, athletes should peak in their late teens and early 20s by playing multiple sports, at least until age 16. A 2013 survey by the American Medical Society for Sports Medicine found that 88 percent of college athletes participated in more than one sport as a child.

[pullquote]A 2013 survey by the American Medical Society for Sports Medicine found that 88 percent of college athletes participated in more than one sport as a child.[/pullquote]

That said, Bills noted only a small percentage actually make it to the collegiate level. If a collegiate scholarship is the final goal of specialization, teens can feel like they failed if they don’t make it after dedicating their childhood and missing out on other opportunities. When a specialty sport is out of the picture, whether it be collegiate or professional aspirations that don’t pan out, young people can feel lost

While young athletes themselves play a big role, the driving force behind specialization is parents. Some parents feel their children have to specialize to keep up. Others are living out their own failed Olympic dreams through their children. And as college tuition rises, athletic scholarships are evermore enticing.

The increase in specialization and intensity could also be attributed to the proliferation of off-season play, according to Rob Cuff, executive director of the Utah High School Activities Association. Nearly every sport has club opportunities, so kids can play a single sport almost year round.

However, Cuff said some coaches mandate time off or encourage their players to play other sports for training and variety. Time away from a sport keeps them from falling into a rut and makes them come back “hungrier” for the sport. Specialization could actually hurt high school teams if the best athletes choose to play on only one team or if coaches aren’t willing to share athletes.

A plus to specialization, he said, is that it opens opportunities for more students to participate.

“High school should be all about participation, more so than it should be about thinking that you should only do one thing,” Cuff said. “But again, some students may feel like they have to concentrate on one thing to make a team.” 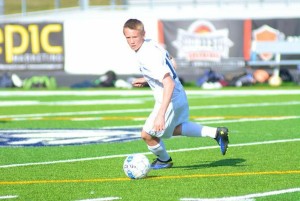 For Chris Herrscher, a 16-year-old soccer player at Corner Canyon High School, it’s important to focus on just one sport.

Herrscher played baseball, basketball and football growing up and turned out to be quite the swimmer when he was 10. However, he decided after his freshman year of high school to play just soccer — a sport he had played since he was 6 and which was the one that just “clicked.”

He said his decision between whether to do swim and soccer or just play soccer was heavily influenced by his coach telling him he couldn’t afford to start swimming again and ease off on soccer.

“It’s great to play a lot of sports,” Herrscher said. “It’s great to get experience in all of those sports, but if you really want to be good at a sport that you love, then dedicate yourself to that sport and that sport only because if you do, you’ll have a lot more opportunities for that sport in the future.”