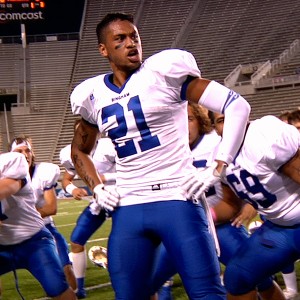 BYU sophomore Harvey Langi is one of four Utah Polynesian football players featured in the Sundance film, “In Football We Trust,” which premieres Jan. 23.

Devoted BYU fans are familiar with the story of the 6-foot-2, 240 pound sophomore’s recruitment. Langi was a four-star recruit out of Bingham High School with offers from many of the top football schools in the nation, including Stanford and USC.

Langi ultimately chose to play for the University of Utah, but had a change of heart while serving an LDS mission in Tampa, Florida, and transferred to BYU.

The film follows these local Polynesian football players as they navigate the cutthroat world of college recruiting.

Polynesians in the NFL

Ever since 1945 when Al Lolotai became the first Polynesian to play in the NFL, Polynesians have been a force to be reckoned with in both college and professional football.

This is especially evident in the state of Utah where BYU, Utah and Utah State have been mining the local high schools for Polynesian talent for decades.

The documentary, which will premiere at the Sundance Film Festival on Jan. 23, explores the pressure placed on Polynesian athletes to not only earn college scholarships, but also make the NFL.

“In Football We Trust” has been a passion project for the past five years for director Tony Vainuku. His main inspiration was the story of his uncle, Joe Katoa, a star linebacker at Highland High School.

“Joe was recruited by major college teams and had high hopes of becoming the next great Polynesian NFL star,” Vainuku recalled in an interview. But things changed for Katoa following the death of his father, and instead of following his dream to play professional football he turned to drugs and gangs, which ultimately landed him in prison.

Vainuku realized he had a unique opportunity to tell the story of the relationship between football and the Polynesian culture as well as the pressure placed on teenagers to provide a better life for their families. In 2010, with the support of executive producer Geralyn Dreyfous and co-director Erika Cohn, he set out to do just that.

“Through the filming process they let us into their lives and didn’t hold back. They took us in and respected our vision, helping us to tell truthful stories,” Vainuku said of the subjects of the film.

Vainuku was given unprecedented access to this tight-knit community to tell his story. “The young men highlighted in the film are going through a tumultuous time in their lives,” he said, noting you will see typical teenage stuff like homework, school dances, and ultimately trying to fit in with their peers.

But most importantly Vainuku says this is a coming-of-age story focused on these four young men trying to find a balance between their family, culture, and the pressures to succeed at all costs.

“The storyline of the movie really fell into place through the life events of the subjects. With exclusive access to the most intimate, every-day life events of the boys, we were able to capture the high stakes world of recruiting, complexities of cultural identity and pressures of family responsibility,” Vainuku said.

Vainuku hopes viewers of the film will come away not only with an increased understanding of Polynesian culture, but also come to terms with what the American Dream really means.

Vainuku said that the drive of these young men, and the community at large, is family. “These Polynesian kids are willing to do whatever it takes to make a name for themselves, and in turn, help their families. If one of these kids lost, everyone lost. If one of them succeeds, the whole family succeeds. As apparent through the film, each subject’s family shared in their every triumph, as well as every failure.”

Vainuku said, “We can’t wait to premiere at Sundance in just a few days and continue the film’s journey.” Following Sundance, Vainuku and his team are working to share the film with the rest of the world through a Kickstarter campaign.

Vainuku hopes that the film is both educational and hits close to home at the same time.

The premiere for “In Football We Trust” is on January 23 at The Grand Theatre on the campus of Salt Lake Community College at 7 p.m. For additional show times visit the Sundance Film Festival website.