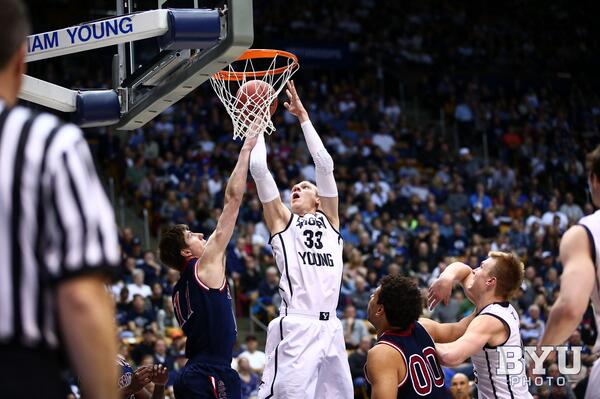 The BYU Cougars’ basketball season is hurting, and there’s talk that senior forward Nate Austin could be shut down for more than just a few more games.

Speculation that Austin — who injured his hamstring in the opening seconds of BYU’s loss to Utah on Dec. 10 — could be out for the year. Austin, who was projected to be out two weeks following the Utah loss, reinjured his hamstring during practice on Jan. 22, as reported by the Deseret News’ Jeff Call.

Tough news for BYU today. Nate Austin reinjured his hamstring in practice and will likely be out a few more weeks.

It was’t until Monday morning, though, that buzz began to circulate that BYU’s biggest defensive weapon could be out for the rest of the year, with the possibility of returning next year on a hardship waiver, according to Greg Wrubell.

Rose told us on last week's radio show that after Austin's the re-injury, he addressed w/ him possibility of a shut-down and hardship waiver

Rose told Wrubell on Monday during their weekly KSL webcast interview that it’s not for certain, it’s just a feeling — they will have to play things out and see.

Rose is not ruling Austin out, and said things have to play themselves out, but when asked for his feel, just said that was his inclination.

His defensive prowess is sorely missed, as the Cougars let San Diego push them around on Sat., Jan. 24, in a game that may have spelled doom for BYU’s NCAA Tournament hopes. It would appear now that the only road to the “Big Dance” will be to win the West Coast Conference tournament, starting March 5 in Las Vegas.