Home LDS Being LDS For the Strength of Youth: 1965 to today

For the Strength of Youth: 1965 to today 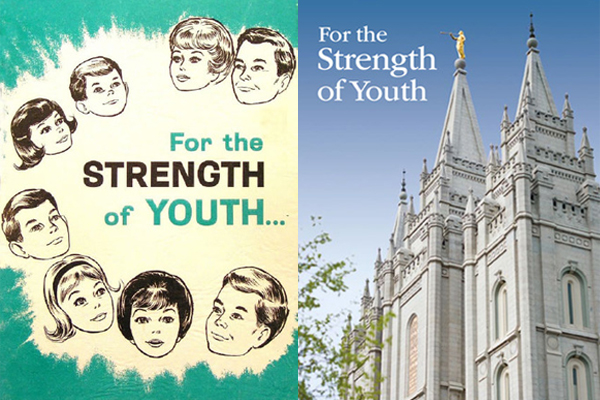 The 1965 edition of For the Strength of Youth has become the stuff of legends for its dated, prescriptive guidelines, especially concerning dress and grooming. The widely accepted American view in 1965 that women should never wear pants in public made its way onto those pages — the pages that were the forerunner of today’s important reference for youth in The Church of Jesus Christ of Latter-day Saints.

But for all the differences between that early edition and the booklet in circulation today, there are similarities as well. You won’t find the word “grubbies” in the 2011 edition, but you’ll find the same spirit of modesty in thought and action that has always been expected of Jesus Christ’s followers.

“The standards have not changed, but times have changed,” former Young Women General President Elaine S. Dalton explained just before the 2011 update. “For the Strength of Youth has been revised to address the issues youth face today — to teach them the doctrine behind the standards and the promised blessings of obedience.”

Here’s a side-by-side comparison of the 1965 edition and the 2011 edition of For the Strength of Youth, including many differences and a few important similarities.

The eight paragraphs of the “Dress” section focus heavily on being consistently in “good taste.” They prescribe what types of clothing are appropriate for certain activities, though with the significant disclaimer that “It is difficult to make an over-all [sic] statement concerning modest standards of dress, because modesty cannot be determined by inches or fit since that which looks modest on one person may not be so on another.”

Even so, the booklet attempts to give helpful guidance, including the following statements:

“Strapless dresses and spaghetti straps are not acceptable either on sun dresses or evening dresses. Few girls or women ever look well [sic] in backless or strapless dresses. Such styles often make the figure look ungainly and large, or they show the bony structures of the body.”

“Pants for young women are not desirable attire for shopping, at school, in the library, in cafeterias or restaurants.”

“Any apparel that suggests a house robe should not be worn in public but only in one’s home or apartment.”

“It is not appropriate for young men to wear extremely tight-fitting pants. When driving around in cars, working in the yard or elsewhere, they should wear appropriate trousers and shirts. Shorts may be worn during actual participation in active sports.”

The section on Dress and Appearance in the 2011 edition speaks in more general terms, though with some specific guidelines as well:

“Prophets of God have continually counseled His children to dress modestly. When you are well groomed and modestly dressed, you invite the companionship of the Spirit and you can be a good influence on others. Your dress and grooming influence the way you and others act. …

“Immodest clothing is any clothing that is tight, sheer, or revealing in any other manner. Young women should avoid short shorts and short skirts, shirts that do not cover the stomach, and clothing that does not cover the shoulders or is low-cut in the front or the back. Young men should also maintain modesty in their appearance. The fashions of the world will change, but the Lord’s standards will not change.”

“Bathing suits which immodestly expose the body, such as bikinis and those with bare midriffs, should never be worn. Swim suits are fashioned for a particular purpose and should not be worn as casual dress for summer, but should be worn only for swimming. While traveling to and from the beach or swimming pools, young men and women should be fully dressed or at least their swimming suits should be covered with outer clothing.”

Two paragraphs are devoted to this odd topic, as follows:

“Girls should always try to look feminine in their dress. They should not dress like boys or try to give a masculine appearance. Dress often determines their actions. ‘Grubbies’ are inappropriate in public for everyone. A ‘real lady’ does not go out in public, to the market, or to shops with her hair in curlers.

“Women’s hair is much more becoming and flattering in a lovely, natural hair-do. Young men’s hair should not be too long. Extreme hair styles are equally poor taste for young men as well as for young women.”

This section of the earlier edition speaks some to personal hygiene, but also encompasses appropriate behavior in public. The counsel includes these statements, among others:

“Looking well groomed and immaculately clean are special characteristics which reflect the standards of the Church. Not only should clothes be neat and clean, but nails, skin, and hair should have the glow of health that bespeaks meticulous care in grooming.”

“In using make-up, girls should keep in mind that cosmetics are used only to enhance their natural beauty. Excessive use of make-up should be avoided.”

This is included in the “Dress and Appearance” section, which includes the following counsel: “Young men and young women should be neat and clean and avoid being extreme or inappropriately casual in clothing, hairstyle, and behavior. They should choose appropriately modest apparel when participating in sports.”

The 1965 edition suggests several “safeguards” to make dating a “wholesome, purposeful, protected, and really enjoyable experience for young people,” including the following:

“There should be no dating before the age of sixteen. Up to this time, social life should be limited to group activities. Variety in dating is desirable.”

“All events planned for the regular weekly MIA [now Young Men and Young Women] night are no-date events. Firesides and dances held on other occasions may be date affairs for those over sixteen years of age. Younger members fourteen to sixteen years of age may attend but should come in groups without dates.”

“Steady dating during the early dating years should not be practised [sic]. If steady dating is carried on in the late teens, regardless of worldwide customs it should be with full observance of the customs and manners of polite society.”

“Necking, petting, intimacies, and improprieties of every kind should not be indulged in at any time in dating or in courtship. Love an affection are precious, and virtue must never be placed in jeopardy.”

Many of the guidelines in the newer edition are strikingly similar, with obvious updates and changes in language.

“You should not date until you are at least 16 years old. When you begin dating, go with one or more additional couples. Avoid going on frequent dates with the same person. Developing serious relationships too early in life can limit the number of other people you meet and can perhaps lead to immorality. Invite your parents to become acquainted with those you date.”

“Plan dating activities that are safe, positive, and inexpensive and that will help you get to know each other. Go only to places where you can maintain your standards and remain close to the Spirit.”

The section “Sexual Purity” speaks to some of the concerns raised in the 1965 edition under “Dating.” Some similar guidance in the newer edition includes the following:

“Never do anything that could lead to sexual transgression. Treat others with respect, not as objects used to satisfy lustful and selfish desires. Before marriage, do not participate in passionate kissing, lie on top of another person, or touch the private, sacred parts of another person’s body, with or without clothing. Do not do anything else that arouses sexual feelings. Do not arouse those emotions in your own body. Pay attention to the promptings of the Spirit so that you can be clean and virtuous. The Spirit of the Lord will withdraw from one who is in sexual transgression.”

The older edition notes four important components to acceptable dancing, including 1. Good Posture (“This is the basis for doing all things well in dancing.”), 2. Dance Positions (“When dancing, young people should avoid crouching, slumping over, trying to do a backbend, or having too close a [sic] body contact.”) 3. Body Movements (“Members of the Church should be good dancers and not contortionists.”), and 4. Type of Music (“Those who are called to serve on a dance committee should always review the music suggested for use during the dance. This decision should never be left to a disc jockey or others who may not be familiar with LDS standards.”)

The current edition places no restrictions on disc jockeys or backbends but does warn against full-body contact while dancing and inappropriate music:

“Dancing can be fun and can provide an opportunity to meet new people. However, it too can be misused. When dancing, avoid full body contact with your partner. Do not use positions or moves that are suggestive of sexual or violent behavior or are otherwise inappropriate.

“Attend only those dances where dress, grooming, lighting, lyrics, music, and entertainment contribute to a wholesome atmosphere where the Spirit may be present.”

In the end, the purpose of For the Strength of Youth is to encourage youth to live happy, virtuous lives. This is reflected especially in the “Clean Living” section of the older edition and in several places throughout the newer booklet.

“All should lead by contagion and help one another to enjoy the good life,” the older booklet reads. “No matter how much one is enjoying himself, he must never forget who he is and how his behavior is making other people feel. Good taste is a modesty of the mind.”

“Strive each day to be obedient,” the new edition reads in the “Go Forward with Faith” section. “Follow these standards, and encourage others to live them as well. Remember the covenants that you have made and that you have the opportunity to renew each week when you partake of the sacrament. Strive to keep these covenants. If you make a mistake, don’t give up on yourself. Your Heavenly Father loves you and wants you to seek His help and keep trying.”