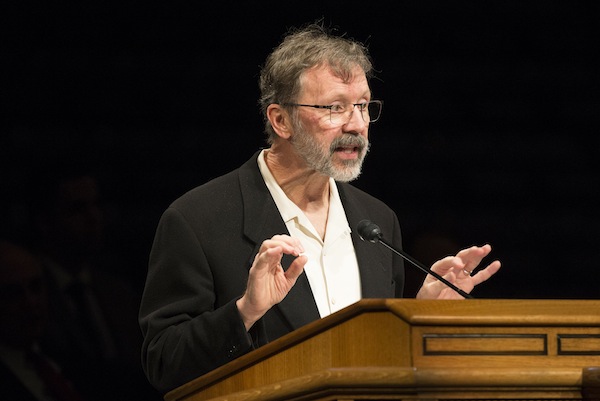 “Most people think of creativity fairly narrowly,” Catmull said. “We should reframe creativity as solving problems.”

Using examples of Disney failures, Catmull demonstrated that life doesn’t have to be practically perfect in every way and encouraged students to be creative while not allowing mistakes to get in their way.

“All of our movies suck at first,” Catmull said. “A lot of people don’t believe me when I say that. They think I’m being self-defacing or modest, but I don’t mean it in that sense. I mean it in the way that the film sucks.”

Here are four unshared stories of obstacles that Pixar and Disney have overcome to get their beloved films to the silver screen.

Growing up in Salt Lake, Catmull dreamed of being an animator and following in the footsteps of his hero,Walt Disney. Despite taking art classes throughout high school, Catmull didn’t stay on the path to animation.

“There was a gulf I didn’t know how to get across,” Catmull said, “So I switched from art to physics.”

In 1974, Catmull received his bachelor’s in computer science and physics from the University of Utah and set out to create a fully computer animated feature film.

“Frozen,” the 2013 Academy Award winner for best animated film, had a rough beginning. Catmull said animators and writers couldn’t figure out the right angle and kept wondering whose story it was and what the nature of the plot should be.

“They were going back and forth and couldn’t solve it,” Catmull said. “And then finally we made a change. We adjusted the dynamics … and we switched into a different mode.”

Now we have a story of two sisters’ love and a song we can’t get out of our heads.

3. Castle on a cloud

It would be nearly impossible for people to recognize “Up” by the first version of the story.

Catmull summarized the original version as taking place “on a castle floating in the sky. There was a king in the castle that had two sons. The sons didn’t like each other. And the people in the castle were at war with the people on the ground.” The sons end up on enemy territory where they come across a large bird.

“This version didn’t make it far,” Catmull said. “All that was left was the bird and the word ‘up.’”

Back to the writing board.

In the second version, Carl (the old man and main character of the current movie) was introduced. However, in this version Carl floats away in his house with a stowaway and somehow ends up on lost Russian territory.

A third version was drafted where Carl and his stowaway float somewhere and meet an old man who is living in this secret location because there are magical eggs that keep you alive forever.

Still not quite right.

In the end, “Up” became a story of true love and adventure.

When discussing high and low risk films during the Q&A session, Catmull reminded everyone that Disney and Pixar are making an “Incredibles 2.”

Catmull explained that “Incredibles 2″ is a low commercial risk. And because we have some low-risk films, “we can make high-risk films like ones about a rat that wants to cook, or a trash compacter that falls in love with a flying robot, or a film about an old man who floats away with a stowaway.”

Welcome back to the family, Incredibles.

One of the first movies Disney made under Catmull’s leadership was “Bolt.” With only eight months left to finish the film, the animators in charge of Rhino, an enthusiastic hamster, told Catmull that Rhino’s character was too difficult to animate.

“The way they had made him he was almost impossible to animate,” Catmull said.

Catmull said the animators believed it would take six months just to re-rig the character before designing all of Rhino’s parts — too much time for the fast approaching deadline. Catmull encouraged them to make the changes and to do it faster.

Some animators spent four days re-rigging Rhino and were ready to proceed with designing Rhino’s parts the next week.

#DisneyFails seem to work out in the end, which was Catmull’s message.