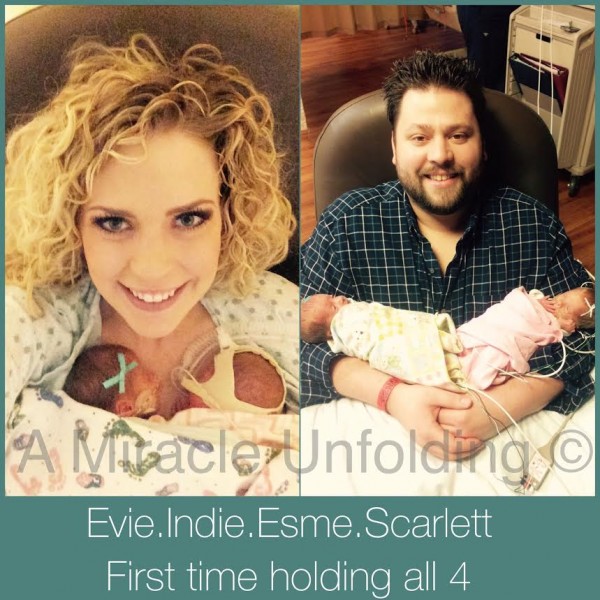 Ashley and Tyson Gardner struggled with infertility for eight years. By what they deem a miracle, the Gardners became pregnant with quadruplets who were born on Dec. 28, 2014 at Utah Valley Regional Medical Center. (Photo courtesy Tyson Gardner)

To say that Pleasant Grove’s Tyson and Ashley Gardner’s lives have changed since Dec. 28, 2014 would be an understatement.

Now their days consist mainly of visits to the hospital to see their newborn quadruplets in the NICU. Between visits, Ashley pumps and Tyson sends updates to the “Gardner Quad Squad’s” nearly 400,000 Facebook fans. They’re also filming a TLC television show called “Baby’s First Year” and, occasionally, eating or sleeping.

But a year ago — and for eight years before that — it was just the two of them, praying for a miracle.

“So many people identify with our struggle,” Tyson said. “Infertility affects a lot of people, but it’s kind of silent. People don’t want to talk about it. When we first went to a fertility specialist, we were blown away by how many people we knew in the waiting room. We want to give hope and tell people to never give up. We didn’t give up, and thank goodness.” 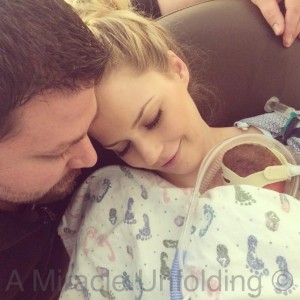 The Gardners, like many other parents, frequently refer to their children as “miracles.” But when it comes to overcoming odds, the Gardner quadruplets are truly exceptional.

In vitro fertilization was essentially Tyson and Ashley’s last chance at conceiving children. After evaluations and just before they completed their IVF treatment, doctors gave the Gardners the news: at the end of the process, they had two eggs that Ashley’s endometriosis hadn’t compromised. One was perfect; the other was OK. There was nothing left to freeze; no other options if it didn’t work this time. Had they come a month later, there would have been zero eggs to work with.

Bottom line: the Gardners had a 40 percent chance of having one baby. The odds of quadruplets were one in 70 million.

“Those aren’t odds you want to hear, especially when you know this is kind of your last shot,” Ashley said. “That was a scary 10 days of waiting. To find out that I was pregnant at the end of those 10 days was a miracle in itself. To find out in another two weeks that we were having quadruplets was a miracle. It just doesn’t happen. You know it’s a miracle when the doctor looks you in the eye and says, ‘This is God’s plan for you, because it’s not scientifically possible.'”

The Gardners, who are members of The Church of Jesus Christ of Latter-day Saints, have always known that God has a plan for them. But during eight years of infertility, that plan was difficult to see.

“Ashley and I we were both raised in the gospel, so we have a knowledge that some people don’t have,” Tyson said. “When you have that knowledge it makes it easier — on some days. Some days are hard no matter what. But we knew that our blessing would come. We didn’t know when, and that was probably the hardest struggle, but that’s also the faith builder. We knew that our blessings would come in God’s time. God’s time is always perfect and it was.”

Ashley says she found strength in the biblical story of Zacharias and Elisabeth, who prayed for a child but didn’t have one until the time came for John the Baptist’s ministry.

“Our experiences aren’t just for us, but they’re for us to reach out and help someone else later on.” —Ashley Garner, mother of quadruplets[/pullquote]

“I feel like I was predestined to have quadruplet girls. But maybe four years ago I wouldn’t have been in an emotional state to have been so public about this,” Ashley said. “I wasn’t public about my infertility until about two years ago. If I had been pregnant then, and with quadruplets, I probably wouldn’t be doing what I’m doing right now. I wouldn’t have been able to help all these people. If I had prayed back then and said, ‘Hey, I’m ready for a baby,’ and He’d given me quadruplets right then, I wouldn’t have had the compassion and experience to give faith and hope to people going through this. Our experiences aren’t just for us, but they’re for us to reach out and help someone else later on.” 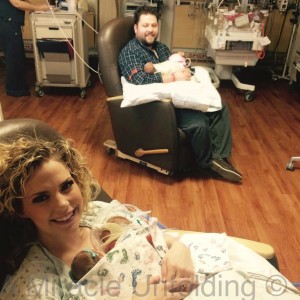 Many of the Gardner’s hundreds of thousands of Facebook followers identify in some way with the Gardners’ struggle. The Gardners aim to raise infertility awareness and provide strength to others.

“Over the years we’ve gained a lot of empathy for each other and for people around us,” Tyson said. “Struggles open your eyes if you let them. If you look around, you see that you’re not alone and that others share your struggles with you. Hopefully you learn empathy. Your home becomes a sanctuary where you can grow and share love. You learn to be less selfish.”

“Infertility is a hard thing,” Tyson said. “To have your faith is probably the most important thing, and right behind that is your support system: your family and friends. That carries you through your hard days. They give you hope and inspiration. They can ask, ‘What options do we have next? What do we need to do next?’ That support is motivational.”

The Gardners get hundreds of Facebook messages from people experiencing infertility. For the most part, these people feel alone and grateful to hear that they aren’t alone.

“What I know, I had to go through the trenches to learn,” Tyson said. “Ashley too. It strengthens us and it builds us. I want those people to know that they’re not alone, that there are support systems out there, that there is a loving Heavenly Father out there, and that miracles happen. Hope is a good thing.”

Spreading messages of hope and faith has allowed the Gardners to see others’ lives change. At one point during Ashley’s pregnancy, two of the babies needed emergency surgery.

“It’s hard to share your pain with people,” Ashley said. “It’s easy to share triumphs. I didn’t want to share the pain I felt that night with people. But we decided to do that, and we got hundreds of thousands of messages from people telling us they were praying for us.”

One of those messages came from a woman who was struggling with infertility and had fallen in love with the Gardner’s story.

“She hadn’t prayed in 10 years, but when she read the post that we were getting emergency surgery, she dropped to her knees and started praying to God for our babies,” Ashley said. “It was hard for me to go though the fear of losing all four of my babies at that time and to fly to another state in the hope that this would work. But now looking back, and knowing that she’s probably not the only one who was touched, I realize that if I hadn’t had to go through that experience, maybe that person wouldn’t have prayed to God and turned her life around.”

Some of the Gardners’ followers have learned what religion Tyson and Ashley belong to and have approached them with questions.

“It’s given us an opportunity to share who we are as members of the LDS faith,” Tyson said. “We get messages all the time of people asking questions about our our beliefs. We get to tell them about our faith. Those are messages that I usually answer first.”

The Gardners are continuing to share their lifestyle as they film TLC’s “Baby’s First Year.” The network is following four couples who are first-time parents, including the Gardners, to observe their struggles and triumphs. The network has not determined a release date, but it will likely be within a year or so.

“They’ve given us a lot of good opportunity to voice our lives and our lifestyle, so that’s really been a blessing,” Tyson said.

Learn more about the Gardners’ experience by watching the video below.