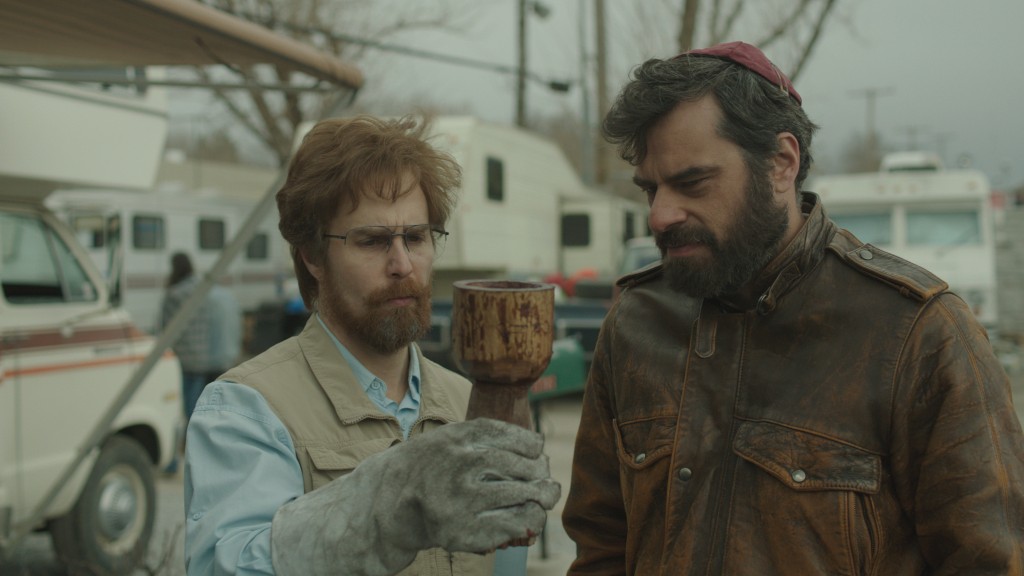 BYU alumni Jared and Jerusha Hess returned to Sundance Film Festival’s center stage Wednesday with the premiere of “Don Verdean,” a film that’s every bit as outrageous as one would expect from the husband-and-wife creative team whose debut film, “Napoleon Dynamite,” stole the show at Sundance in 2004.

“Don Verdean” takes a humorous look at faith, failure and fraud within the world of Biblical pseudo-archaeology. When the title character, played by Sam Rockwell, struggles to dig up the Biblical artifact sought by his benefactors, he gets desperate and fabricates a find. His conniving Israeli colleague Boaz, played by Jemaine Clement, catches Don in his lie, and Boaz’s greed takes the pair down an out-of-control path that grows more absurd by the minute.

Faith was an easy subject to tackle, said Jerusha Hess.

“It is in our life,” she said. “We have fun with it, and it’s fun to not take it so seriously in this movie.”

[pullquote]“(Faith) is in our life. We have fun with it, and it’s fun to not take it so seriously in this movie.” —Jerusha Hess, Co-writer of “Don Verdean”[/pullquote]

Even in the midst of his lies, Don remains focused on his earnest goal of saving souls — which brings up an interesting question of the balance between faith and fraud, said Jerusha Hess.

“Why we like this story is that (Don) is so passionate about what he does,” she said. “He can’t achieve what he really wants and then has to get really creative. … We’re all human, and … it’s easy to sway between belief and unbelief.”

Delving into the world of Biblical archaeology amused the Hesses, who brought up such humorous real-life searches as a former Baywatch cast member’s quest to find the remains of Noah’s Ark on Mount Ararat.

“I think in any kind of religion there’s a fringe element that’s very entertaining,” Jared Hess said. “The fringe element of Biblical archaeology over the years has done things that are very funny. … They’re not properly trained, they’re not using proper scientific data-gathering techniques. They’re going out with Bible in one hand and imagination in the other, and saying, ‘Well, that could’ve been the rock that (David) used to slay Goliath.’”

While the idea for exploring this world came from a friend, Jared Hess said he’s had brushes with a similar element in the Latter-day Saint world.

“My grandmother lives in Brigham City, and she loves studying Book of Mormon archaeology,” Jared Hess said. “She’s always been interested in ‘where did it happen?’ and she’s been all over the map. Her theories have changed over the years. So it’s something fun, but a lot of her books that she reads looks like they were made at Kinko’s and don’t have credible authors.”

While people might assume it’s difficult to be a faithful Latter-day Saint in Tinseltown, Jared Hess said his experience has been the opposite.

[pullquote]“I think people’s principles that they live by can be challenged in any point in their life and anywhere, so it’s no different. It’s never been a problem. I just don’t think about it.” —Jared Hess, Director[/pullquote]

“I think people’s principles that they live by can be challenged in any point in their life and anywhere, so it’s no different,” Jared Hess said.“It’s never been a problem. I just don’t think about it.”

“Every human we’ve met thinks that it’s just so charming that Jared is this outspoken Mormon,” Jerusha Hess added. “He talks about it, isn’t ashamed of it. He’s able to laugh at his culture equally.”

The Hesses remained in Utah to raise their children, a decision that was driven by proximity to family, Jerusha said. Filming “Don Verdean” in Utah — featuring a few Salt Lake City churches as well as using Southern Utah for the Middle East and an Indian reservation — provided the rare close-to-home experience during filming.

“If you’re a writer and director of your own stuff, you can decide where you want to live,” she said. “All our family is here.”

Local audiences can try to see “Don Verdean” during Sundance Film Festival with two final screenings: at 6:30 p.m. Friday, Jan. 30, at Peery’s Egyptian Theatre in Ogden or at 9:15 p.m. Saturday, Jan. 31, at the Grand Theater in Salt Lake City. The film was acquired by Lionsgate for future release in the first big deal of Sundance. Information: sundance.org/projects/don-verdean

Light at the end of the tunnel: Bill Anderson benefits from new game-changing treatment for Hepatitis C Next post