Light at the end of the tunnel: Bill Anderson benefits from new game-changing treatment for Hepatitis C 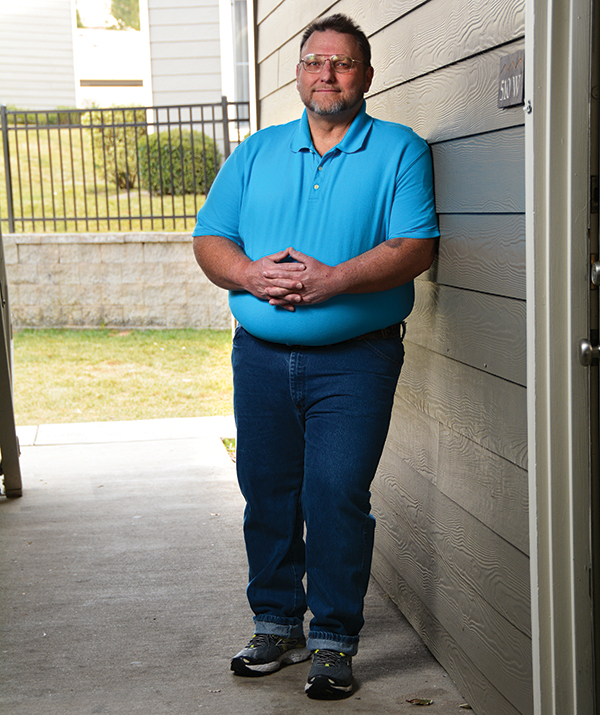 Orem’s Bill Anderson was cured of Hepatitis C last June thanks to a new FDA-approved treatment.

Bill Anderson is a fighter.

An Orem transplant two years ago from Georgia, he’d spent two decades fighting Hepatitis C after testing positive from receiving tainted blood products to help him with a spleen issue in 1993.

After running a fever and experiencing other flu-like symptoms the previous day, Bill woke in the night feeling nauseated. His wife, Milly, heard him knocking around, but she thought he would come to bed shortly.

“When I woke up at about 7 a.m., I found him in the restroom catatonic,” she says.

She got him to the car with the help of her daughter’s fiancé and rushed Bill to Utah Valley Regional Medical Center.

Doctors would discover hepatic encephalopathy, which is the loss of brain function that occurs when the liver is unable to filter toxins from the blood.

Hepatitis C is a contagious disease that attacks the liver and is caused by infection with the Hepatitis C virus. It can lead to cirrhosis and other long-term liver conditions like Bill had experienced.

[pullquote]“With Hepatitis C, I was reluctant to use the word ‘cured’ until six months ago. We used to say the word ‘remission.’ Not anymore. This is a game-changer.” —Chris Biesinger, a nurse practitioner with Central Utah Clinic in Provo[/pullquote]

“When I met Bill he already suffered from severe edema (swelling caused by excess fluid trapped in the body’s tissues) and was seeing the effects of severe liver damage,” says Chris Biesinger, a nurse practitioner with Central Utah Clinic in Provo and one of Bill’s primary care providers. “He was in pretty bad trouble.”

Bill worked to get on a liver transplant list, but he knew the virus would continue to attack even the healthiest of livers. He had tried three different medication regimens, each one lasting about 18 months and having severe side effects including psychosis.

It’s little wonder, then, that Bill was skeptical when Chris approached him six months after his UVRMC hospital stay concerning a recently FDA-approved treatment that seemed to be getting amazing results against the virus with few, if any, side effects. But Bill being a fighter, he was willing to try anything.

“I was encouraged because it seemed to be a whole new approach to treating the virus,” Bill says. “It was expensive, but my insurance covered a lot and we got some other help to make it happen.”

Sovaldi was approved by the FDA on Dec. 13, 2013, and was combined with Olysio, which was approved just prior.

“Sovaldi was seeing success rates of 90 percent and cut the treatment time way down — all with minor side effects,” Chris says. “When these two drugs came out, I thought we might have a prayer with that combination.”

According to the Centers for Disease Control, 3.2 million people in the United States have chronic Hepatitis C virus infection. Many may not know they have the virus unless they get tested.

The CDC suggests people with the following traits should be tested for Hepatitis C:

2. You are a current or former injection drug user, even if you injected only one time or many years ago.

3. You were treated for a blood clotting problem before 1987.

4. You received a blood transfusion or organ transplant before July 1992.

5. You are on long-term hemodialysis treatment.

6. You have abnormal liver tests or liver disease.

7. You work in healthcare or public safety and were exposed to blood through a needlestick or other sharp object injury.

8. You are infected with HIV.

“With Hepatitis C, I was reluctant to use the word ‘cured’ until six months ago,” Chris says. “We used to say the word ‘remission.’ Not anymore. This is a game-changer.”

In the months since his treatment, Bill has enjoyed better health and is physically and emotionally stronger.

“I’m getting better everyday,” Bill says. “I’ve been cleared to go back to work.”

Milly is finally seeing the life the couple wanted since their marriage in 1998.

“We have a future, finally,” she says. “At times, it was hard to see through the clouds, but now, we can set goals again.”

Bill’s goal is to see his liver heal without a virus continually attacking it. Chris — and the rest of the medical community — is excited to see how a liver can heal, too.

“This is a part of science we’ve never seen before,” Chris says. We’ve never had a Bill Anderson — or patients like him — so we’re not sure what to expect.”

However, Chris believes — and preliminary research shows — that Bill’s liver will heal.

And it’s not just Bill who is seeing the positive effects of the new treatment. Chris has treated about 65 Hepatitis C patients with the drug combination, and only one of those cases wasn’t cured.

“This is all we talk about in my field,” Chris says. “People used to come into my office like they had a death sentence. Now, we have a plan to get the virus out of them and they are shocked. There’s no reason someone needs to die from Hepatitis C anymore without putting up a really good fight.”

Chip off the cold block: 13 ways Utah Valley is cold Next post