Home Things To Do Events Mayor Wilford Clyde, late Harold Wing to be honored as 2015 ‘Pillars of the Valley’

Mayor Wilford Clyde, late Harold Wing to be honored as 2015 ‘Pillars of the Valley’ 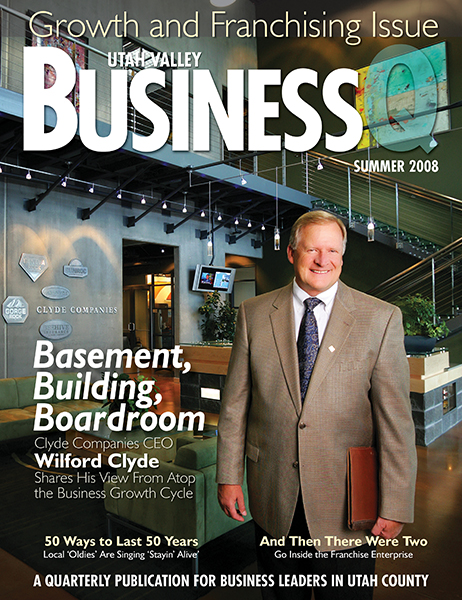 Wilford Clyde was featured in the Summer 2008 issue of Utah Valley BusinessQ.

The Utah Valley Chamber of Commerce has selected Wilford Clyde, mayor of Springville, Utah, and the late Harold (Hal) R. Wing, founder of Little Giant Ladders Systems and Wing Enterprises, as its Pillar of the Valley Award recipients for 2015.

They will be honored March 27 at the fifth annual gala to be held at the Utah Valley Convention Center.
The Pillar of the Valley Award was created in 2011 to honor an individual or individuals who have made extraordinary contributions to the business, civic, social, educational, and cultural climate of Utah Valley. The gala is one of the premier social events in Utah Valley, attracting many key Utah business, civic and church leaders.
“We are proud to honor these great pillars of Utah Valley,” said Rona Rahlf, president and CEO of Utah Valley Chamber of Commerce. “The contributions Wilford Clyde and Hal Wing have made, and continue to make, are nearly unmatchable. Without question they completely represent the values the Pillar of the Valley strives to acknowledge each year.”
A native of Springville, Mayor Clyde takes great pride with his involvement in the community. He served on the Springville City Council from 1989 to 1992 and was the commissioner for girl’s softball for three years supervising 25 teams. He also coached for 10 years in the Filly and Fox softball leagues. He and his wife, Natalie, chaired the Springville Museum of Art Ball; the UVU President’s Ball and was co-presidents of the Springville Red Devil Booster Club.
Following his LDS Church mission to New Zealand and upon graduating from Brigham Young University with a BS degree in Accounting, Mayor Clyde began working in the family construction business, Geneva Rock Products. He is currently the president and CEO of Clyde Companies, Inc., the parent company of W.W. Clyde& Co., Geneva Rock Products, Sunroc, Gorge Rock and Beehive Insurance. 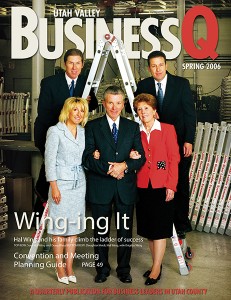 Harold (Hal) Wing was featured in the Spring 2006 issue of Utah Valley BusinessQ.

Hal Harold Wing passed away in August 2012. He is the third person to receive the Pillar of the Valley Award posthumously. Inspired by a German ladder prototype he found in the 1970s, Wing founded The Little Giant Ladder System and within the first year sold more $500,000 in ladders. He later founded Wing Enterprises. He was named to the Utah Valley Entrepreneurial Forum Hall of Fame, named Who’s Who in Finance and Industry, recognized within Men of Achievement and as the 2005 Ernst & Young Entrepreneur of the Year. He also served for Presidents Ronald Reagan and George H. W. Bush as representative on small business at several national conferences. He was also mayor of Springville, Utah from 1997 to 2001. He is the father of seven children.
Tickets for the gala may be purchased at the Utah Valley Chamber of Commerce office by calling 801-851-2555 or at www.thechamber.org.
Share