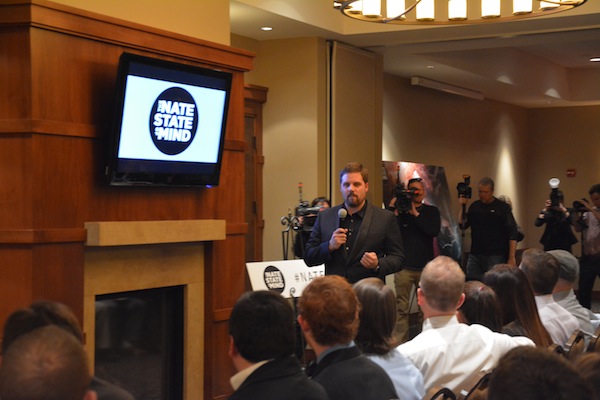 Mission Belt Co. Co-founder Nate Holzapfel speaks on his side consulting business, The Nate State of Mind, while a camera crew films behind him. Holzapfel shared that they were in the process of filming a “Shark Tank” spin-off. (Photo by Rebecca Lane)

A camera crew snuck around the crowd at Mission Belt Co. Co-founder Nate Holzapfel’s speech Thursday night and attendees were required to sign release forms giving permission to be on TV, but no one knew why.

That is, no one knew until Holzapfel shared in his address that he was filming for a new spin-off show of ABC’s “Shark Tank.”

Entertainment Weekly announced a “Shark Tank” spin-off show, “Beyond the Tank,” in October 2014.”Beyond the Tank” follows the business owners who struck a deal with the sharks after their appearance on “Shark Tank.”

Entertainment Weekly reported, “‘Shark Tank’ often shows brief updates on the businesses, but this would be a deeper, hour-long look at what happens after entrepreneurs partner up with the show’s moneyed investors such as Marc Cuban, Kevin O’Leary, Lori Greiner, Robert Herjavec, Daymond John, and Barbara Corcoran. Including whether or not the deal even comes to fruition.”

But that wasn’t the purpose for the event.

Holzapfel appeared on “Shark Tank” in 2013 for Mission Belts Co., and he got multiple sharks to bite.

After striking a deal with Daymond John on “Shark Tank,” Holzapfel has seen his business grow and he opened a side business, The Nate State of Mind, to share his success and consult others, especially with those in Utah County where Holzpfel was born.

“(Nate)’s a Utah entrepreneur who started a business out of the back of his car. He took it to ‘Shark Tank,” made a lot of money, but instead of sitting on that, he decided to dedicate himself to helping other entrepreneurs be successful,” said Adam Durfee, the event organizer. “So we organized this event tonight so he can speak to a lot of Utah Valley’s entrepreneurs so he can teach them how he did it, what’s successful for him, what has worked for him and give them the opportunity to talk back to him.”

Holzapfel focused on what he deems “the biggest secret in business” — relationships. He encouraged everyone to be friendly at all times because they never know whether that random person they meet will help them 10 years down the road. He used his relationship with his “Shark Tank” partner as an example of one type of relationship.

“Daymond John was here today,” Holzapfel said. “This is a relationship I value; it’s a person who’s become my friend. We spent a lot of time on the road together. … I never thought that one day I would wake up and have total access to this guy.” 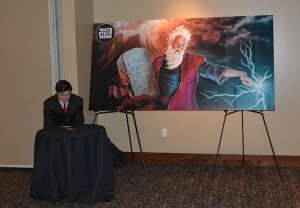 As part of Holzapfel’s consulting business, he shares the “10 Commandments of Selling.” Designer Bryan Niven took a picture of Holzapfel depicted as Moses and animated this poster. (Photo by Rebecca Lane)

John was in Provo for filming earlier Thursday, but went home sick before the event.

“Although I invited him, it was never official he was going to be here,” Holzapfel said. “He had to hop on a plane and get out of town. We shot film all day today. We recorded for a couple of days and he’s absolutely beat exhausted.”

Holzapfel is grateful to be doing business out of Utah County, where he was born.

UV crime: Arson in Orem, heroin in Alpine Next post