Stroke of good fortune: Time is of essence in stroke recovery for Spanish Fork 30-year-old 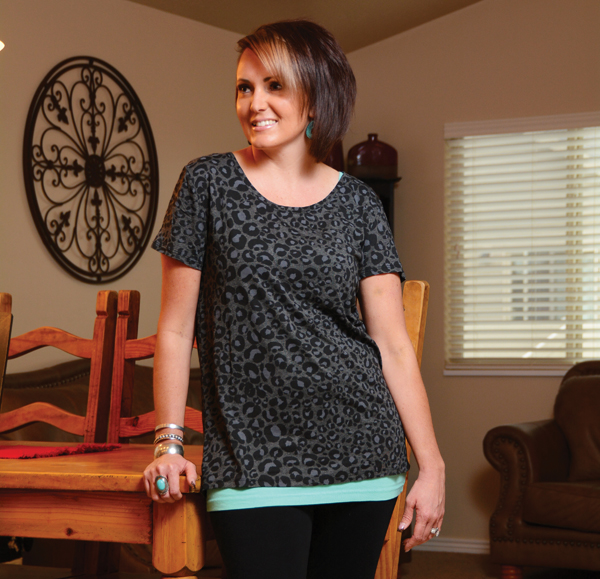 Chelsea Miller is a typical 30-year-old in Utah Valley. She was raised in the area and loves the outdoors. She works hard and spent the majority of Nov. 13, 2014, at her job at the law offices of Anderson & Dart in Spanish Fork.

However, that evening she became an atypical thirtysomething.

She suffered a stroke.

“My right arm went numb all of a sudden,” she says. “It was pretty quick, and I didn’t have any other symptoms. It didn’t hurt or anything.”

A timely call from her older sister, Aubrie Wride (a nursing student), changed everything.

“She told me to get to the doctor right away,” Chelsea says. “I probably would have just tried to take a nap and see if it got better. I’m glad I listened to her.”

Chelsea’s husband, Kevin, drove her to the after-hours clinic and the doctor immediately told her to get to Utah Valley Regional Medical Center. On her way to the car from the doctor’s office, her right leg went numb.

“That’s when I knew it was something serious,” Kevin says.

Although her symptoms pointed to a stroke, Chelsea’s age and lack of risk factors had doctors taking a second look.

“With Chelsea — mainly because of her age — we had to make sure it wasn’t something that mimics a stroke,” says Dr. Kevin D. Call, a neurologist at Utah Valley Regional Medical Center in Provo. “There are some things that mimic the symptoms, but as we looked at it, it became clear she was indeed having a stroke.”

During Chelsea’s medical workup, doctors checked her fine motor skills by asking her to touch her thumb to each of her fingers. Then they asked her to place her index finger on the tip of her nose.

She failed each test.

Chelsea’s medical miracle came in the form of tPA (tissue plasminogen activator), a medication designed to dissolve clots and improve blood flow to affected parts of the brain. The medication needs to be administered to eligible patients within three hours of symptoms. If that occurs, tPA can reduce the amount of damage to the brain, helping to improve the long-term outcomes for the patient.

“There are risks with the medication, but the potential benefits were worth it,” says Kevin about determing treatment for his wife.

Within an hour of receiving the tPA, Chelsea was already seeing increased motor skill function.

“Timely administration of the medication is the reason she’s doing as good as she is now,” Kevin says.

While tPA altered the outcome for Chelsea, only about 4 percent of stroke patients are administered the highly effective drug. While some don’t qualify for other reasons, Dr. Call says the most common reason is time.

“Time equals brain,” he says. “It’s crucial that patients get to the hospital as soon as possible. Stroke is a 9-1-1 situation. With strokes, minutes matter.”

That was made clear to Chelsea when doctors asked what time symptoms started. She said “about 6 o’clock.”

“They needed me to be as accurate as I could because it mattered,” she says. “You need to be aware of your body and take note of things like the time.”

Now, just a few weeks after suffering from her stroke, Chelsea is doing well. She has returned home and is working through her physical and occupational therapy regimen. She’s confident she will have no lasting effects from the episode.

“Eventually, I think I should be at 100 percent,” Chelsea says. “The therapists are amazed at how well I am doing.”

In addition to the tPA, Chelsea had a strong dose of “I can do this,” which also added to her miracle. While only about 15 percent of strokes are fatal, they are the leading cause of adult-onset disability.

“From the beginning I concentrated on doing everything they asked me to and working as hard as I could to recover,” Chelsea says. “I wasn’t going to live a life where I couldn’t do the things I loved to do.”

Chelsea knows she’s lucky and is grateful she listened to a sister’s counsel to seek medical help when she otherwise might not have.

“You have to listen to your body,” Chelsea says. “It’s telling you something is wrong. Listen to it.”

University Place will be an economic hub for Orem Previous post