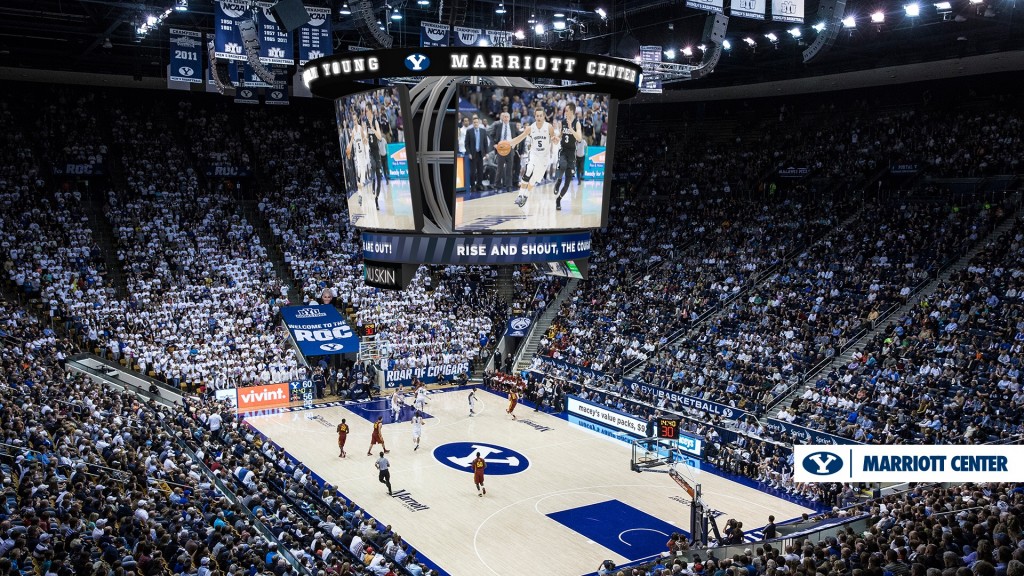 A rendering of the completed additions and renovations to the Marriott Center, which include new LED scoreboards and prime seating. (BYU Athletics)

“We look forward to these exciting upgrades to the Marriott Center,” said Larry Duffin, BYU special events director. The new LED boards and improved seating throughout the lower bowl are part of BYU’s ongoing efforts to ensure that the Marriott Center remains a vital part of campus for years to come.”

The Marriott Center changes include new lower-bowl seating similiar to that of the lower-bowl seating on the north end of the court — fully padded chairs. In addition to the new seating, BYU will replace the video walls and scoreboard with state-of-the-the-art LED boards.

When the project is complete the the Marriott Center will house 19,000, a reduction of 1,900 seats from this year. The renovated lower bowl will offer approximately 8,000 prime chair seats that are padded. Construction on the Marriott Center is set to begin around May 1, and be completed by the end of summer.

A view of the newly announced Marriott Center Annex … pic.twitter.com/1g8cEeu7EW

“I am very appreciative to the BYU administration, the athletic administration and those who have worked tirelessly to make the new practice facility a reality,” BYU head coach Dave Rose said. “I also want to thank the many donors who have been so kind and generous — their support have been invaluable. This facility is a major commitment to our basketball program. It will enhance recruiting, the student-experience and the development of our players.”

The annex will include, but is not limited to, a strength and conditioning center, a training room with hydrotherapy, office suites for men’s and women’s basketball, athlete study room and hall of honor showcasing the history of BYU basketball.